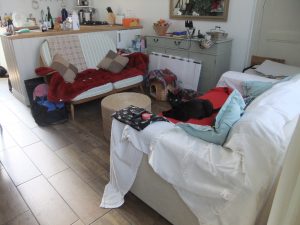 Colin in the gite

Well, we finally made it.  Months of planning, trips to France, property viewings, endless admin and general gnashing of teeth seem to have paid off and we arrived in France, with our three cats, Jim, Mouse and Colin, sister, Kitt and brother-in-law, Steve, on Saturday 25 July, 2015. 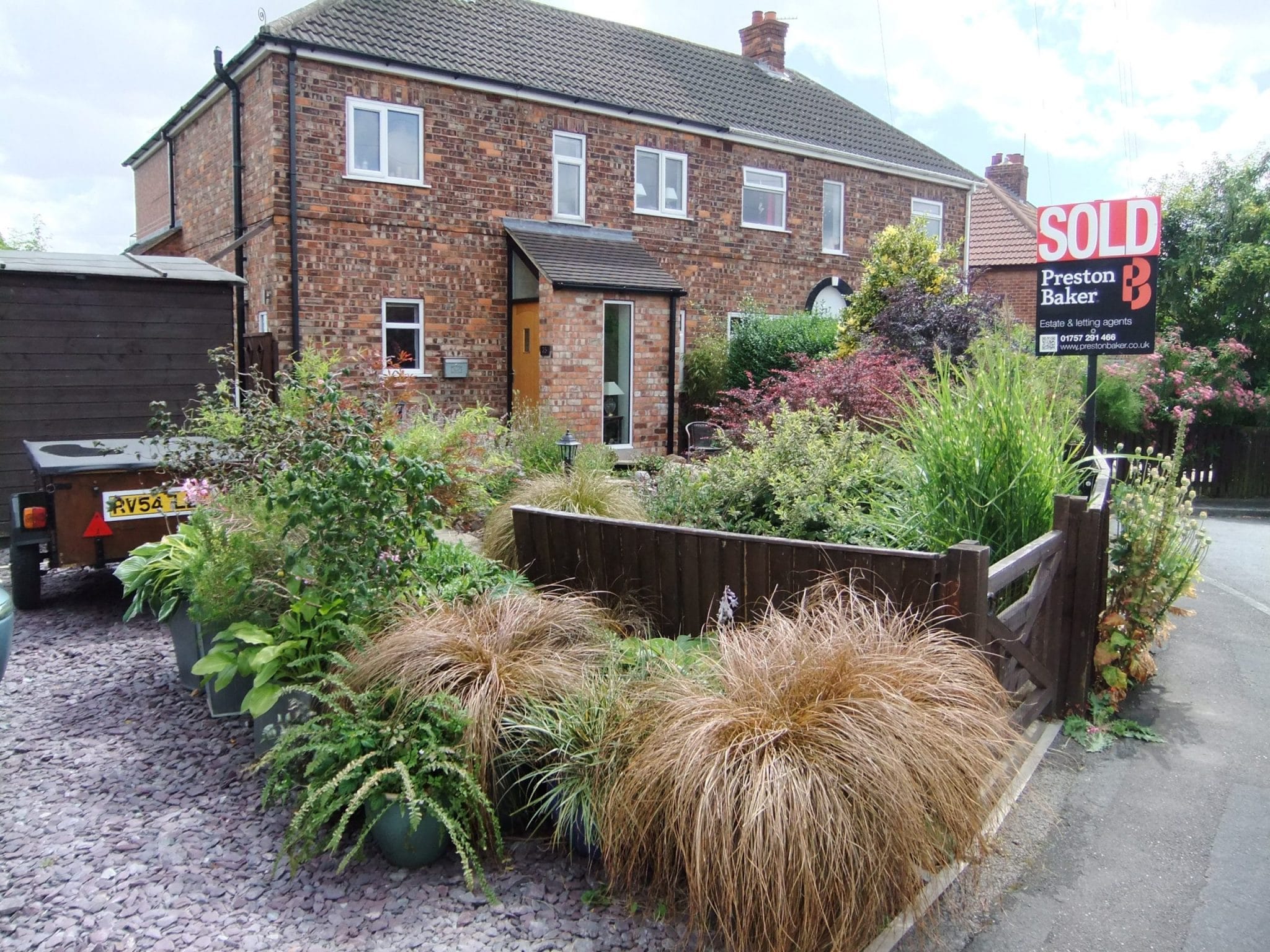 The house sold within 4 weeks of being on the market in April 2015….. Two van-loads of plants were taken down to my parents, in Kent, to look after while we went through the move.  Our plan was to move into a property in Lower Normandy, with house contents, etc. and rent from the vendor while the purchase went through on the French side.

Two weeks before the move date, we discovered the English operatives working for a French estate agency had deliberately misled us in an attempt to secure the sale, as, unbelievably, they had made no such arrangements for us to rent the property!  As a result, we decided to walk away from buying the house, instead, spending a frantic weekend rearranging removals and finding somewhere else to live temporarily, with 3 cats in tow, at extremely short notice……

Thankfully, there are some good people out there and we shall be renting a gite for our first week, then moving into a cottage until we find our own place.  Grateful thanks to Amanda for the last minute booking of her gite in St Fraimbault (Nomandy Cottage Holidays) and for putting us in touch with her friend Charles, who is soon to be our new landlord!

So, instead of loading up a lorry and trailer for a direct move to Normandy, two lorries and a trailer arrived early in the morning on Wednesay 22 July, with a team of three, who took 3 days to pack and load our wordly goods into crates for storage…… 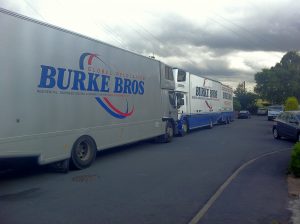 The cats, when they could be found (Colin did a runner so had to be taken over the next day!)  were taken to Aristocats cattery (Aristocats) for safe keeping….. 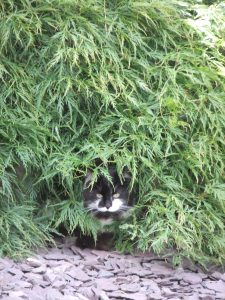 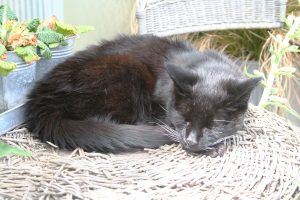 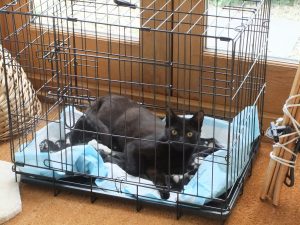 Mouse, Jim and Colin – ready for the off??

The removals team, Shaun, Pete and Dean were brilliant – nothing was too much trouble as long as we kept them topped up with tea!! 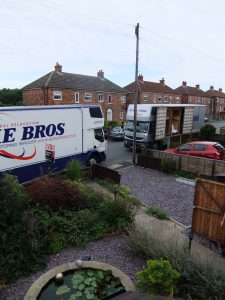 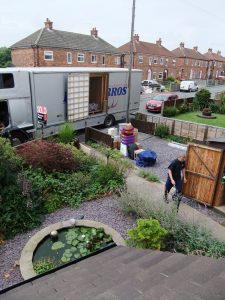 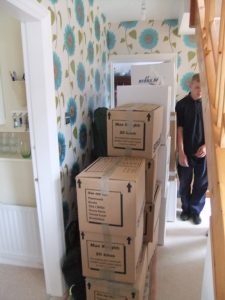 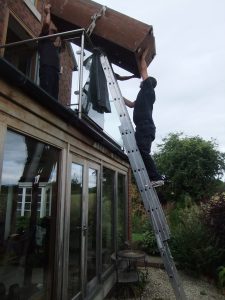 Gradually, each room was emptied…… 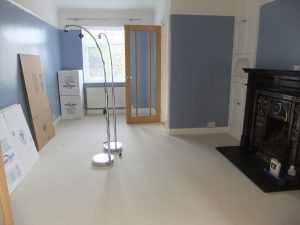 Day 3 of the packing and loading, all that was left was Edward’s shed – they’d left the best till last!! 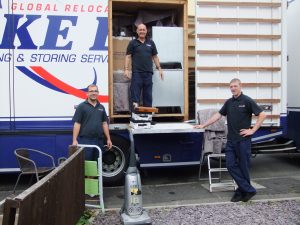 Dean, Shaun and Pete – still smiling after a mammouth packing and loading job – hope they will be able to all come over and help unload!

At this point we had to split up – I collected the cats, hitched up the trailer, said goodbye to everyone and headed down to Kent to meet up with my sister and brother-in-law, who would be coming with us with a van-load of plants on the ferry from Dover to Calais.

Edward stayed on with the removals team to ensure everything that had to go was loaded, take last meter readings and drop the key through the letter box, then was to head down for his crossing on the Eurotunnel…..

Unfortunately, we’d planned our trip on the busiest day of the year, when the kids have broken up from school and everyone apparently takes their holidays – plus strike action at Calais and disruption at Eurotunnel caused chaos on the roads from the A14 all the way to Kent, with the M20 closed for the Eurotunnel!  Consequently, a 4-4.5 hr journey took more than 6 hrs….

Colin wasn’t happy, despite the calming drugs – two stops on the hard shoulder to clear up ‘accidents’ and 2 hrs later, he finally settled down….

On arrival at Mum and Dad’s in Kent, it was on with loading the van with the plants M & D had been looking afer for us – quite some load! 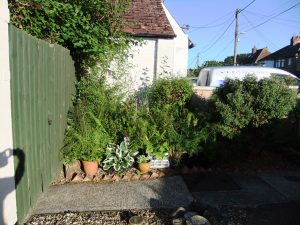 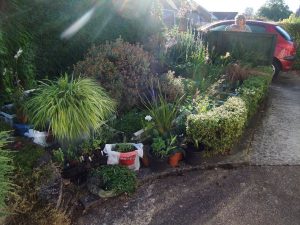 Phase 3 – The Crossing and Drive to St Fraimbault

Almost as soon as the van was loaded, the heavens opened – torrential rain soaked us in minutes as we re-loaded the cats into the car, re-hitched the trailer and readied ourselves for Dover.  The roads were running like rivers all the way, making driving treacherous but we arrived in good time for the crossing, with no hold-ups – even customs let us through!

In the meantime, Edward took just as long to negotiate the long queues and hold-ups to the tunnel but arriving in time to take an earlier crossing.  Our plan was to meet up altogether at a service station about an hour or so from Calais – ‘Air Baie de Somme’.

Crossings were uneventful but the drive through northern France was horrendous.  Just when you thought it couldn’t get any worse, the torrential rain was accompanied by terrific lightning storms, with sheet lightning illuminating the surrounding for miles, continuing all the way to Baie de Somme – it was so bad, it was difficult to make out the road markings! 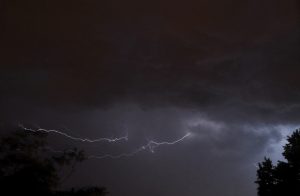 Thankfully we all met up as planned, had a bite to eat (it was around 1.30am by this point) then headed off for the final leg of the journey, estimated around 3.5 hours.

It was actually closer to 5.5 hours more driving – 2 stops, one for 40 winks, slow driving, more rain and extreme tiredness meant we’d underestimated how long it would take.  We finally arrived at La Jolie Maison in St Fraimbault around 7am on Saturday morning.  Steve said for the last 20 miles he was in ‘zombie mode’ and kept telling himself ‘follow the lights, just follow the lights….’.  I don’t quite know how but we all made it in one piece…

We slept through most of the day, emerging in the late afternoon, when we took the van of plants over to the cottage we shall be renting after our first week in St Fraimbault.  A glimpse of the cottage below….. it’s in a beautiful location, extremely quiet and rural with only one near neighbour with a friendly cat and dog!  No doubt Jim, Mouse and Colin will need to learn to speak French to make new friends…… ! 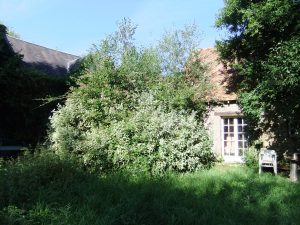 So, our first day in France was nearly over and what a day it was!  The earlier storms had subsided long enough for us to enjoy a meal in the garden of the gite in St Fraimbault.  Steve and Kitt did a brilliant job bringing the plants over for us – we are so grateful to them. 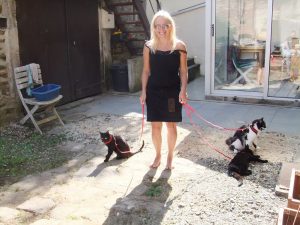 Kitt, the ‘cat lady’ walking the moggies in the courtyard!

Around 9.30 am, Kitt and Steve headed back home – we drove them as far as the A88 with directions to Calais.  Sadly, the disruption at the port hadn’t ended, so they had to drive further on to Dunkirk to take a ferry back to Dover – Sorry Kitt, you didn’t get to the hypermarket after all – better luck next time?!! xx