By mid-April, we had completed the last of the bedrooms and the upstairs toilet (barring the floor and cupboard doors), just in time for my parents’ visit.  We’d decided that as the bathroom was serviceable, we would cease work in here until after they had returned home.  But then we decided that as there was only a week before we popped over to the UK ourselves, it wasn’t worth setting to with the DIY until after we came back. So, instead of donning spanners and paint brushes, we had a ‘holiday’ in the garden!

A border for the small barn

During Mum and Dad’s stay, Mum gave me a hand in the garden – we spent a very windy day relocating the greenhouse (for the third time) in the barn…  Actually, it was blowing a gale and Mum did well to hang onto it without it being blown away for the second time!! 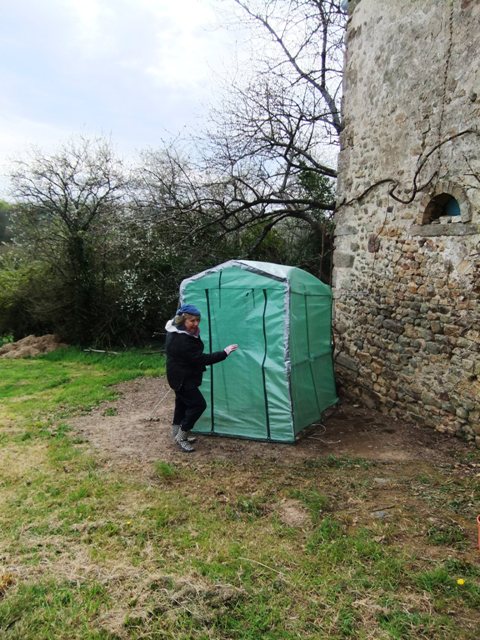 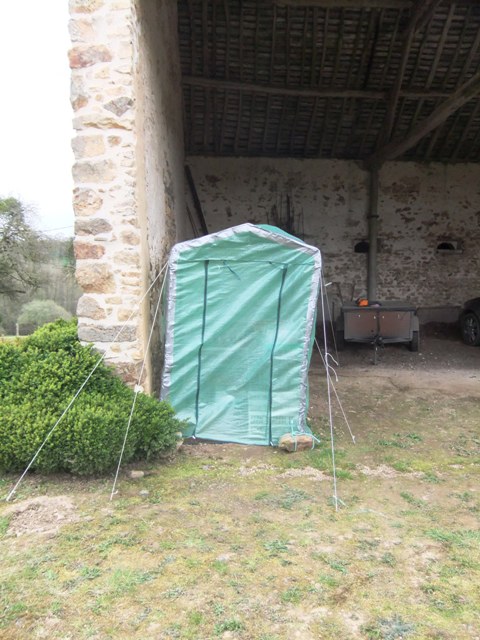 We did quite a lot of seed sowing too – yes, we look like Bill and Ben but in our defence, it was cold and we’re each wearing about 5 layers to keep warm! 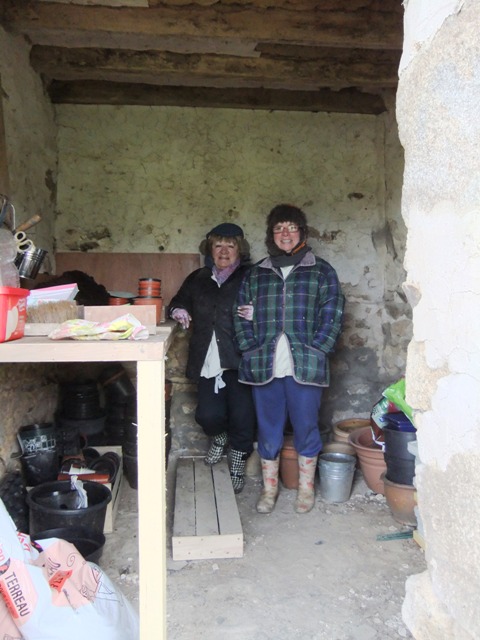 Mum also made a start on a narrow border I had intended to make, just in front of the small barn.  She managed about a foot before Dad and I insisted she stopped – more stones and rocks made it impossible to dig, despite Mum’s best efforts and will not to be beaten!

After they had returned home, I went back to the border.  Four wheelbarrows of rocks and stones were removed and I had to add new soil from the bank to bring it up to the right level.  Two days later and I’d created a mini parterre, using stones instead of box to make the edges… 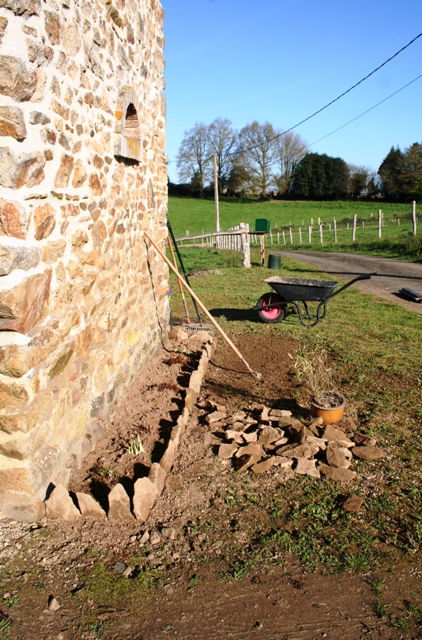 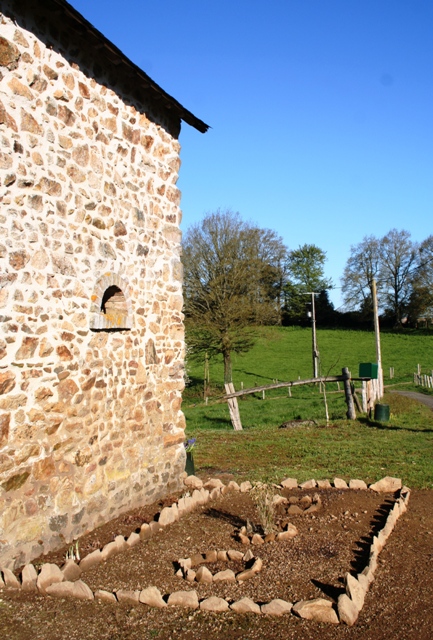 When the roofs on the house and barns are done, I’ll use crushed old slates to fill the gaps between the planted areas – proper French!!

While I was building Stone Henge, Edward was doing a great job of mending the doors to the sheds at the end of the barn – only one closed properly, the other three needed fixing in one way or another…. 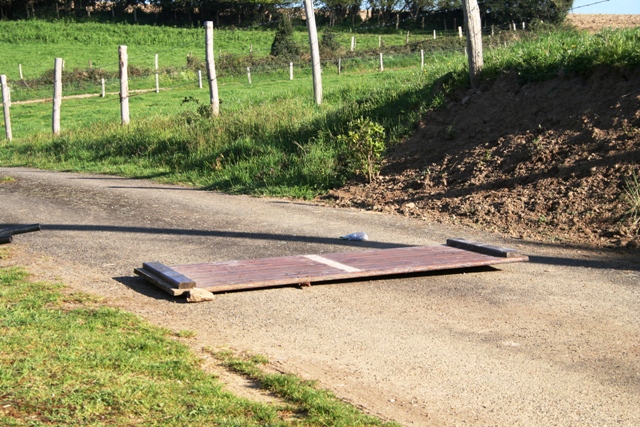 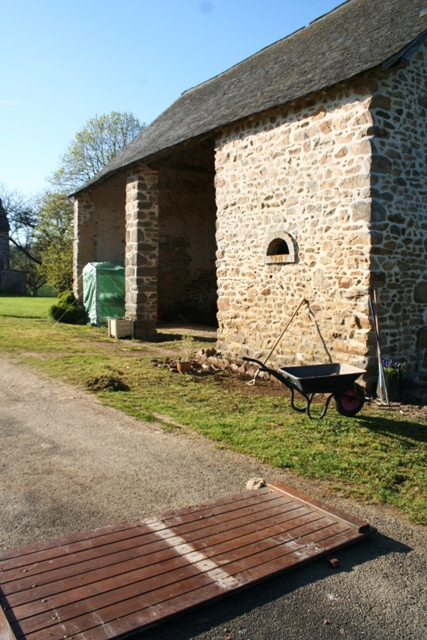 New cross bars, some planing and some adjustments to the hinges means I now have doors that I don’t have to struggle with to open and close – he’s a star!! 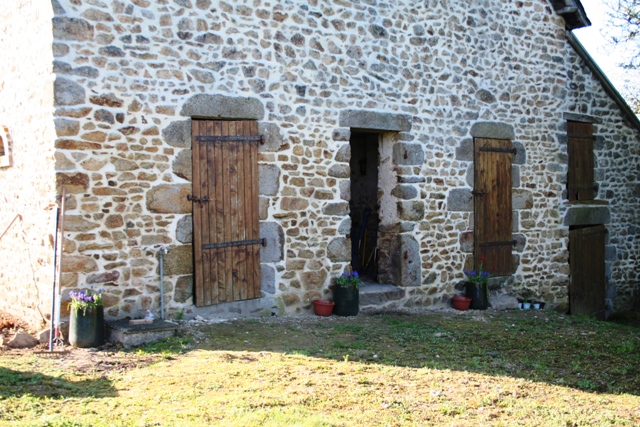 We had a brief interlude this day, to chose a walnut tree from M Ory’s plantation.  He’s grown several over the years from a parent tree that we pass on our local walk.  He told us that we could take the risk and dig one up now and then, if it failed, we could try again in the winter.  We thought we’d give it a go…. 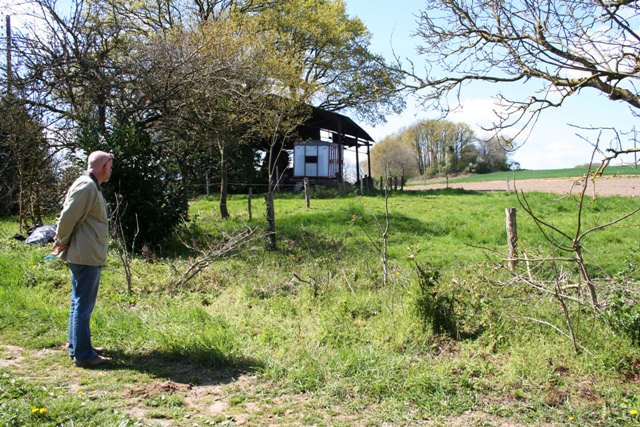 It was difficult to chose but we decided on this one…. 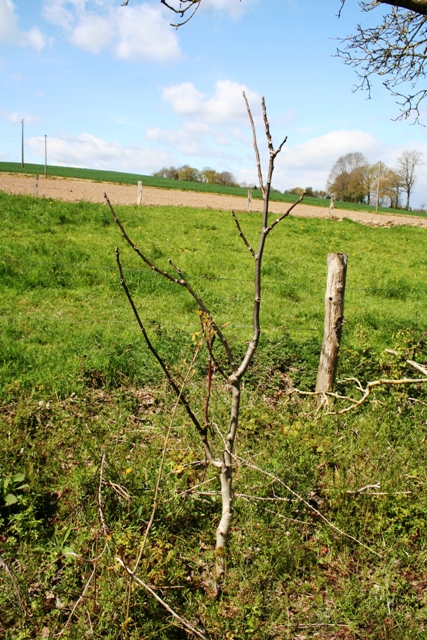 The usual task lay ahead of digging out a tonne of rocks and stones but eventually we managed to get several good roots up and I carried it home across the fields, while Edward drove the car back.  By the time I’d arrived, he’d already started digging the hole and voila! – here it is near the end of the small barn… 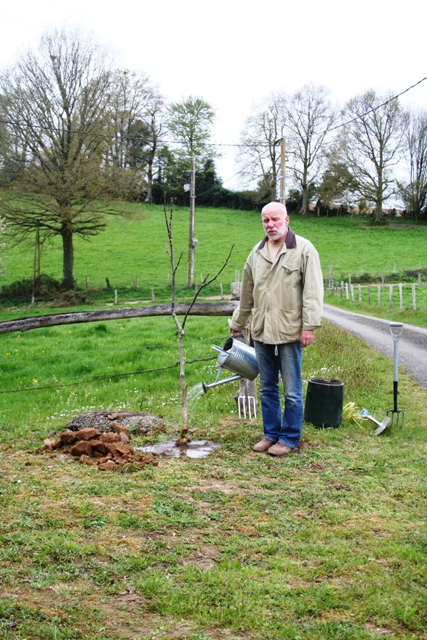 We have everything crossed it survives the upheaval – if it does, it should make a stunning addition to the garden.

One thing leads to another

So, I’d planted up the new border with ferns and hostas, which had been standing around in pots for ages by the well and at the end of the big barn.  As this gradually made it clearer in this area, I thought I’d try levelling off the ground behind the well wall – here it’s extremely stony and rocky, probably the debris from when the 18-metre-deep well was first dug out….. This would make a perfect spot for catching the summer sun in the afternoon and would be very sheltered behind the stone wall of the well.  Edward came to see what I was up to – we bandied ideas and came up with decking as being a reasonable solution to a difficult problem – I stopped levelling!  Instead, I had the idea of making a short, narrow hedge from some cotoneaster seedlings I’d noticed in the garden at the end of the house…. 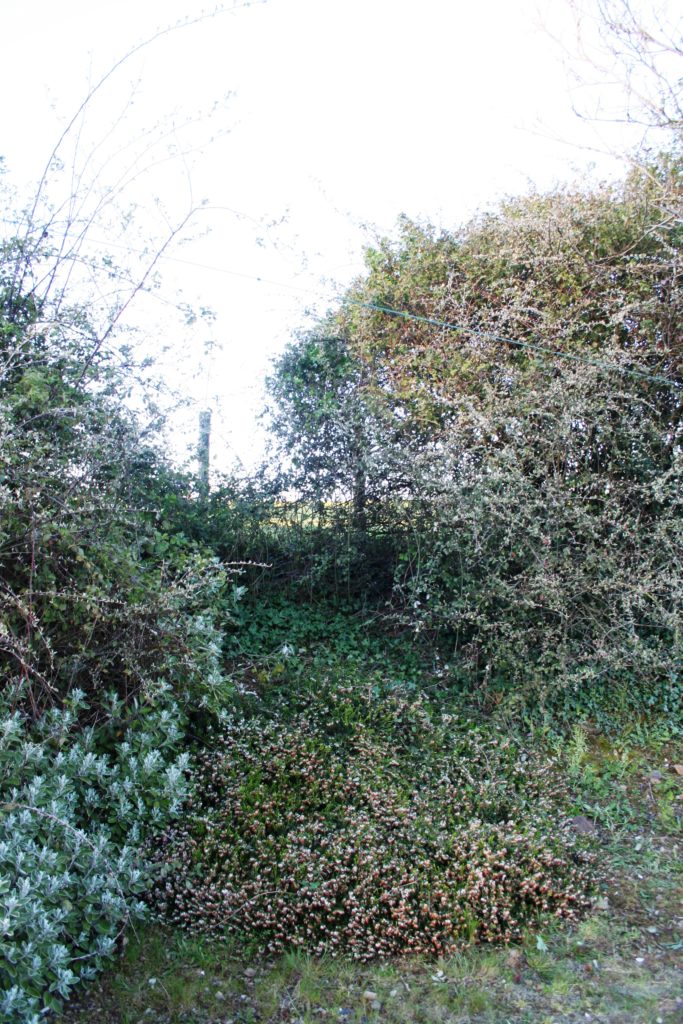 There is quite a thicket of them here and eventually, when we get back to this section, they will all be cleared out with the remaining brambles and other weeds, so it seemed like a good idea to use ‘free’ plants where they were available.  I dug up and replanted about a dozen stems…. 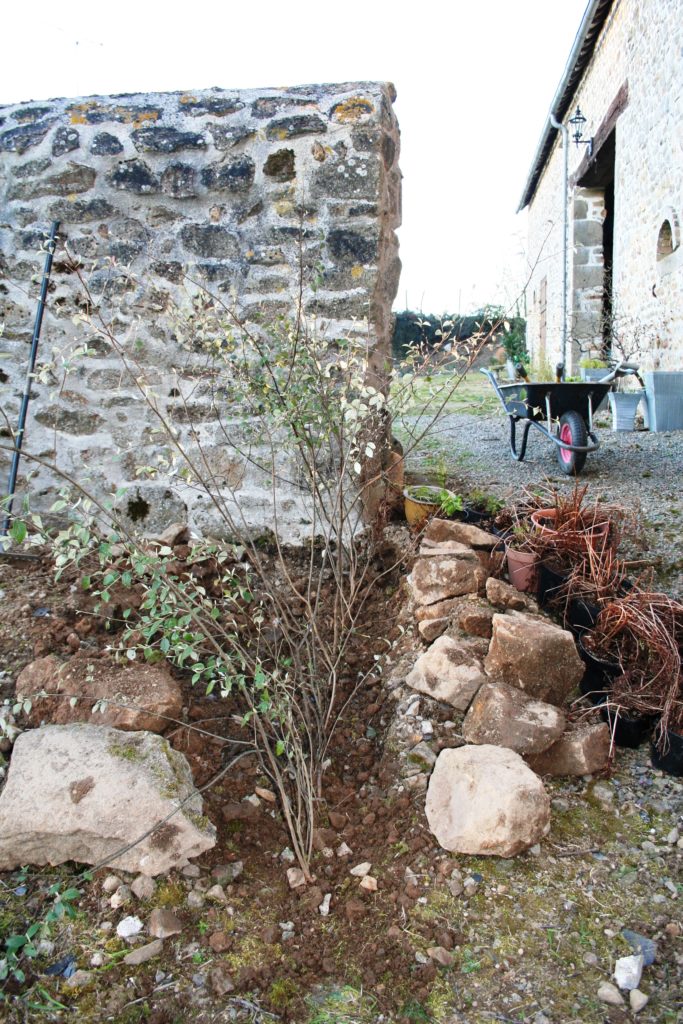 The rocks were all dug out of this small section! 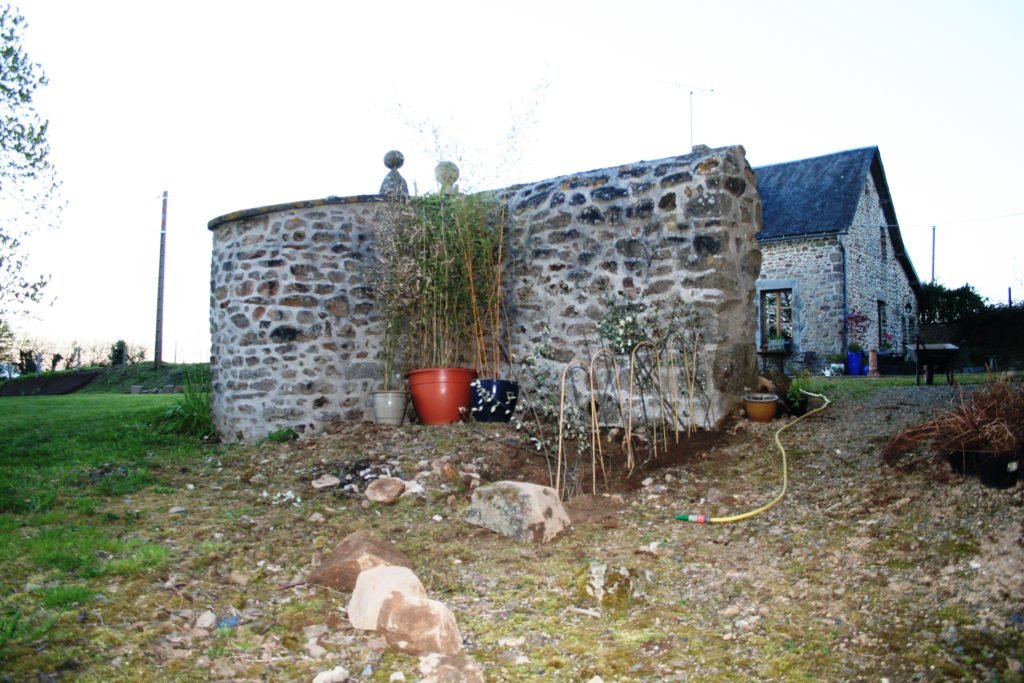 Cut back and tied in, they’ll soon start bushing out to make a nice little protective hedge, while the rocks will be used to edge further borders and pathways….

We call it the woodland but really it’s a scrubby copse full of self-seeded plums and brambles and covered with ivy!

One job certainly seems to lead on to another without any real planning.  Well, I plan in my head what I’m going to do in the garden but am easily distracted by something else.  And every job I tackle still seems to take twice as long…..

As you walk down the side of the well wall, a broad path takes you into the wood.  It’s in a bit of a mess and the visible drainage pipe constantly irritates me! 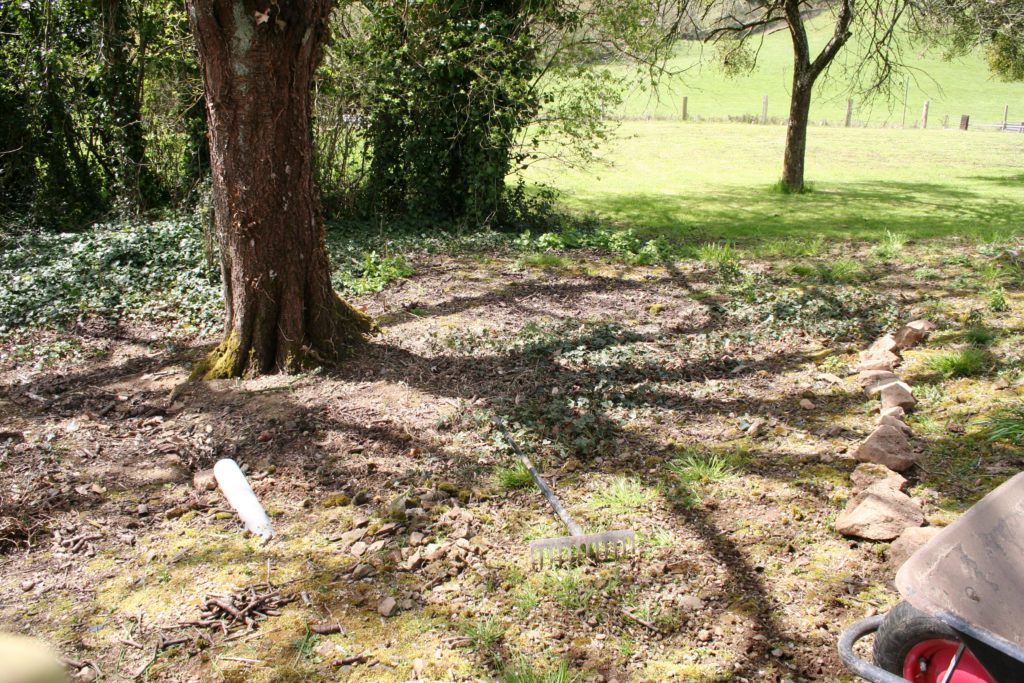 However, this seems to be a perfect spot for some of my specimen ferns and other shade-loving plants.  I started setting out the right-hand edge of the pathway that would lead to the orchard, using the larger rocks I dug up behind the well.  Then I woke up one night with another idea (!) – we could use the bay tree branches that Edward cut down to edge the pathways in and around the wood…..  Not wanting to waste any time, I cleared ivy from the main path, covered the drain pipe with soil and compost and we started arranging branches….. 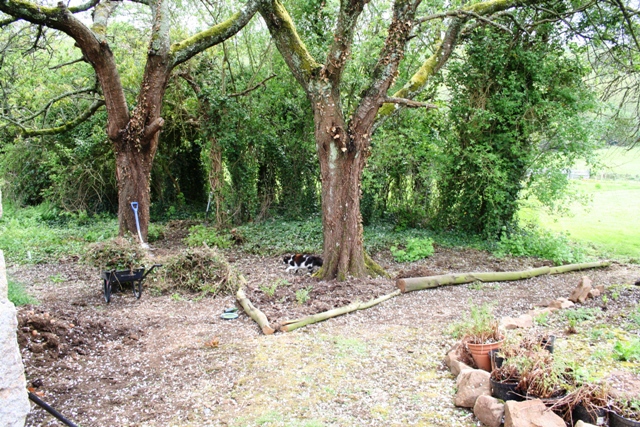 When we first started clearing weeds and leaves from the garden, back in the autumn, we thought the compost heap would be OK at the end of the barn, but now we are making more use of the woodland, it’s obviously in the wrong place and the main compost is now behind the big barn.  The old compost heap, just visible in the left of the above picture, needs moving, and the easiest thing to do is spread it onto the new borders in the woodland.  It will be good for the ferns, especially.

Just beyond the cherry tree on the left, there seemed to be a natural break in the scrub and undergrowth.  Edward started cutting down brambles and self-sown plums and I continued clearing ivy to make a little winding path through the wood and out into the meadow… 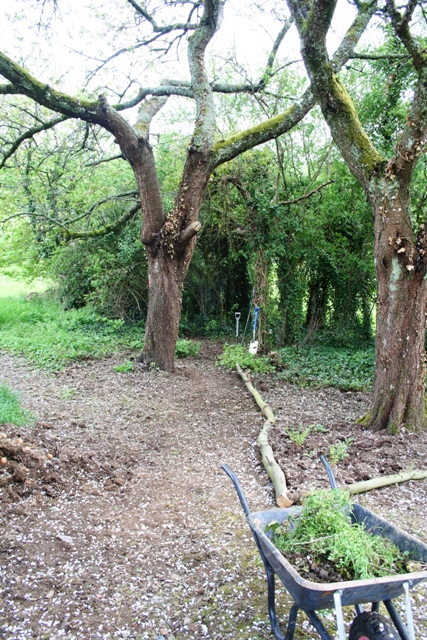 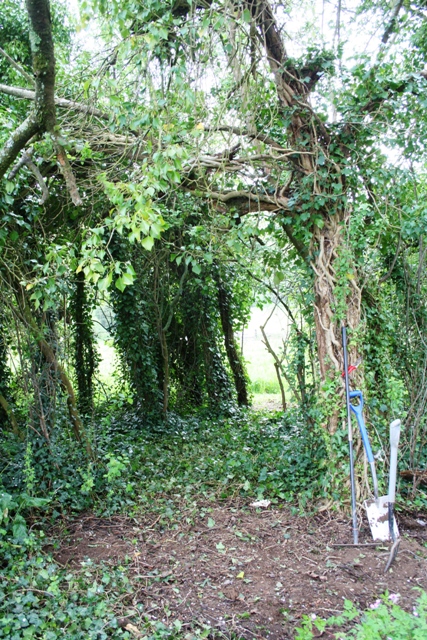 Gradually, over several days, the ivy has been cleared and we have used more logs and branches to define the path, with Mouse’s and Colin’s help, of course! 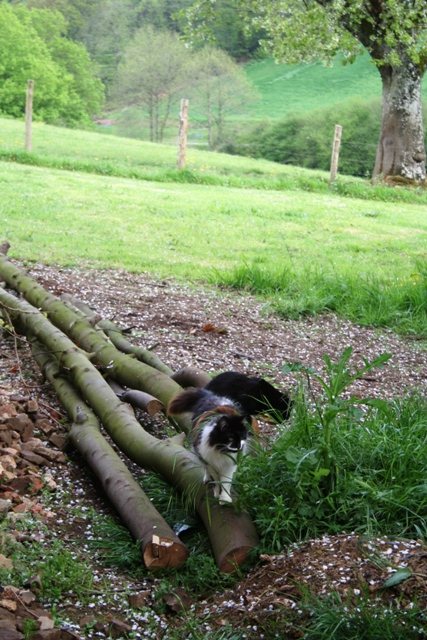 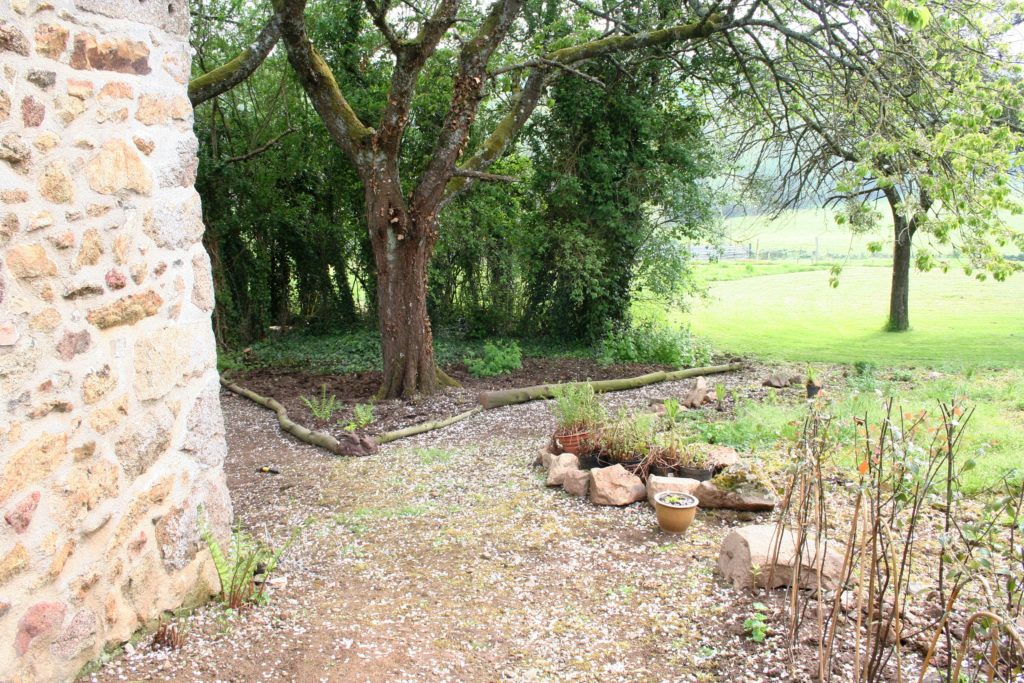 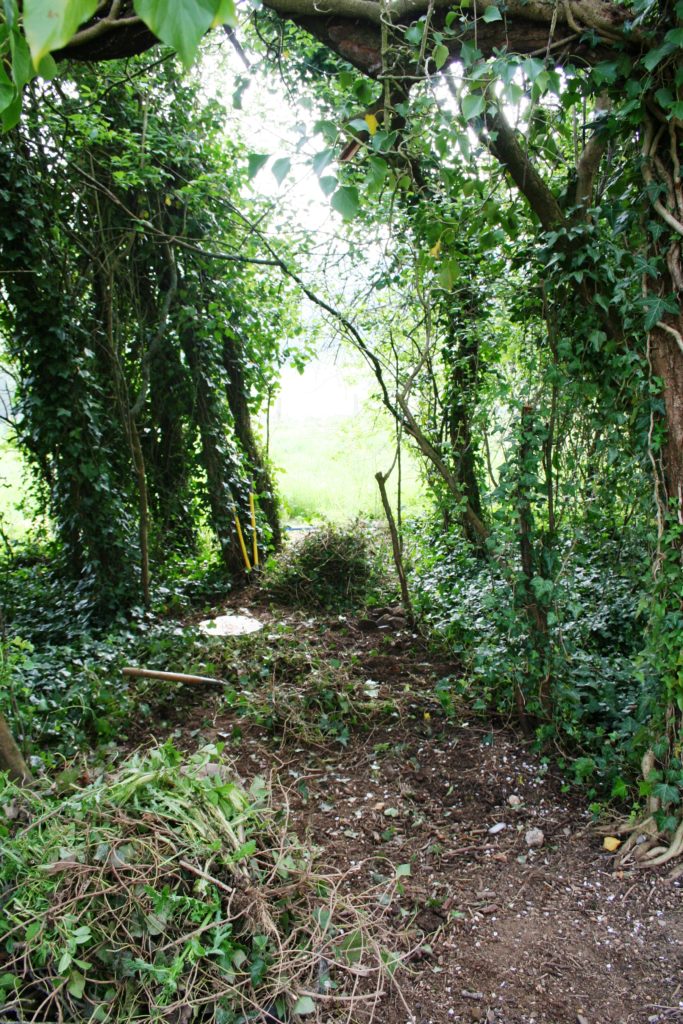 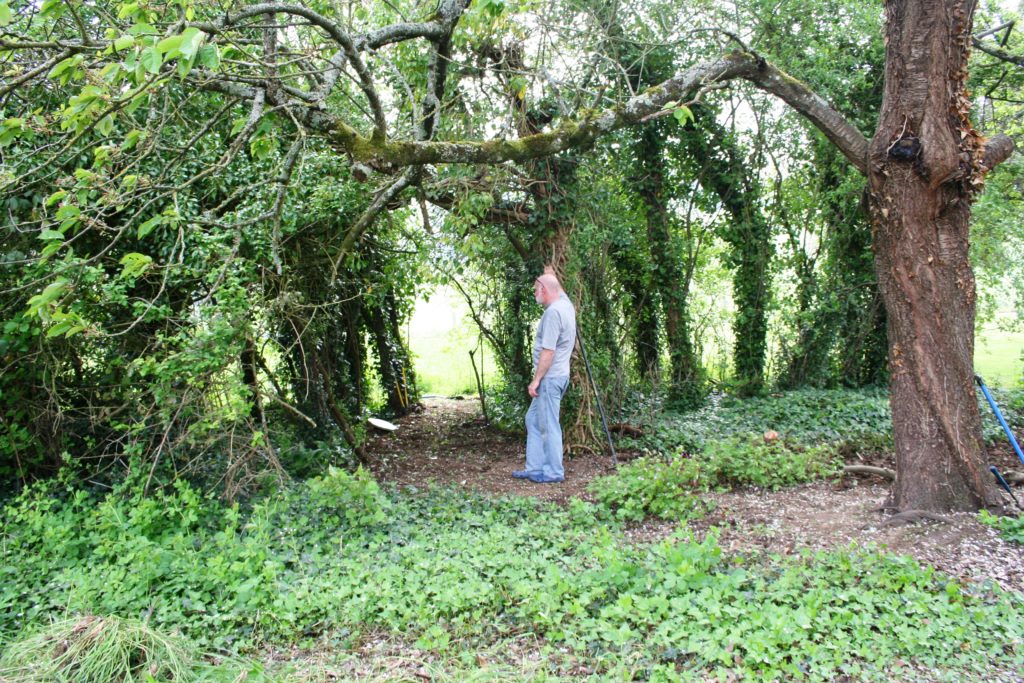 Eventually there was light at the end of the tunnel!! 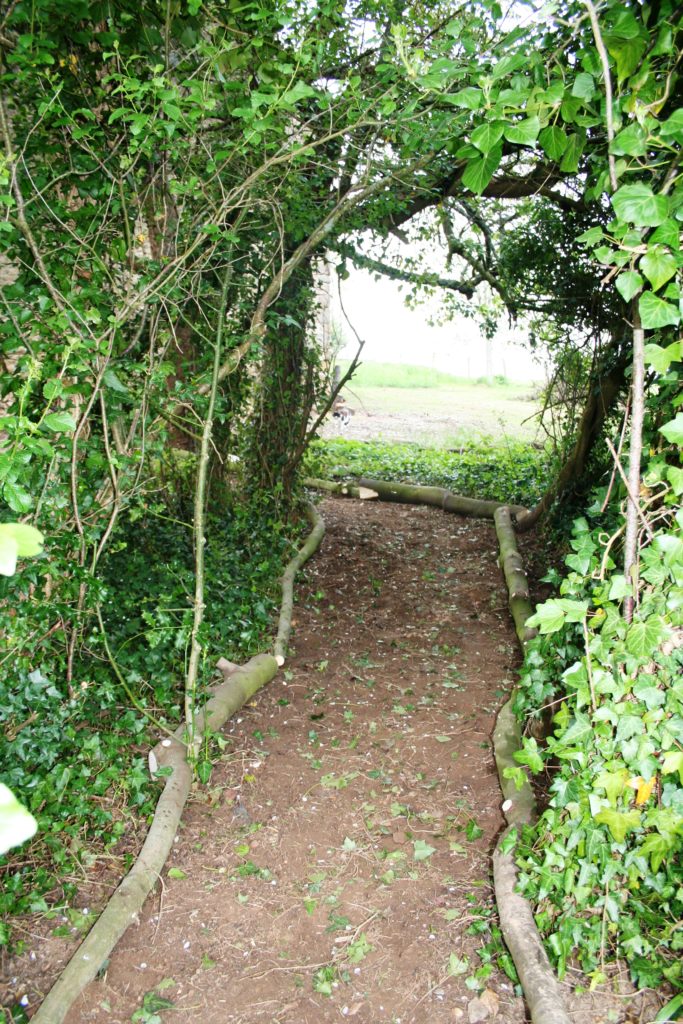 And we can now take a stroll through the meadow, around the winding paths that Edward has made… 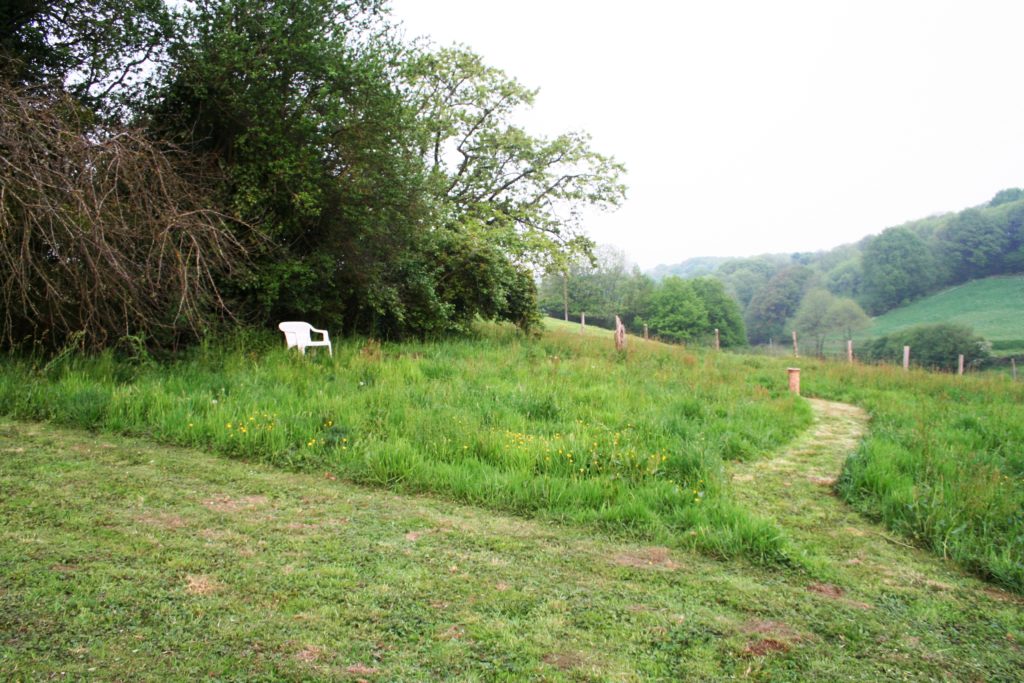 Or, take a rest on the bench we bought for 8 Euros from EMMAÜS and take in the view, sights and sounds of the meadow and across the valley… ♥ 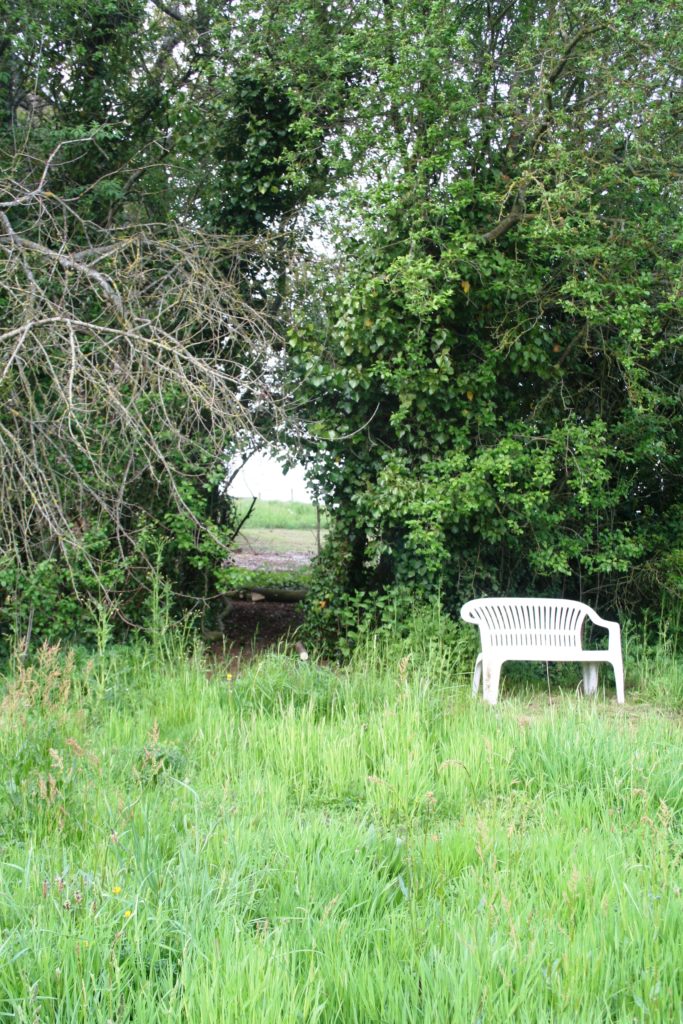 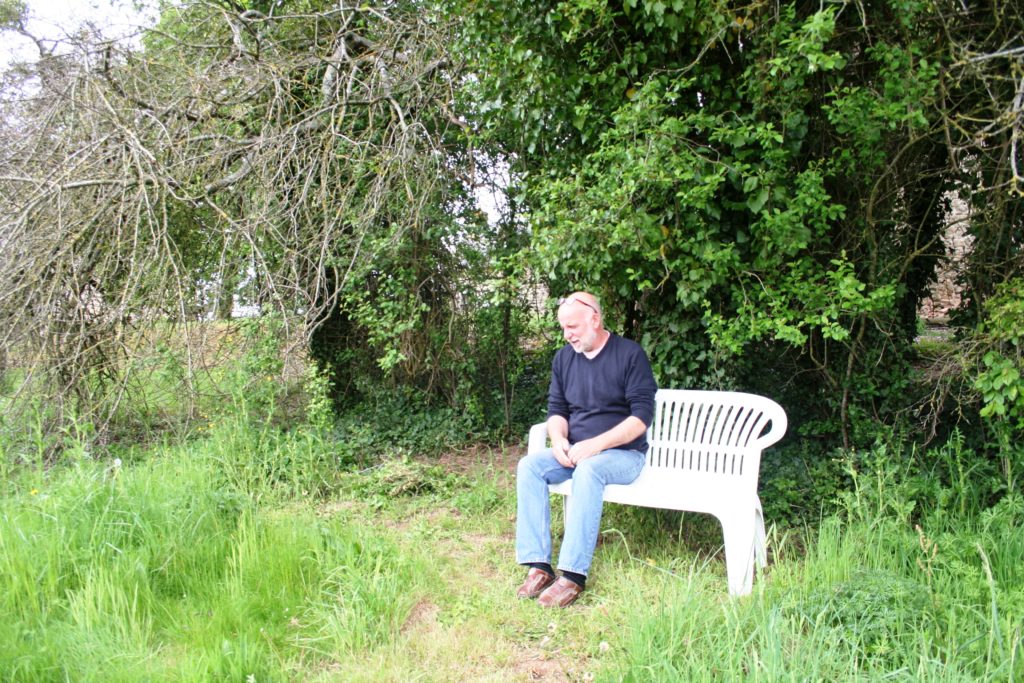 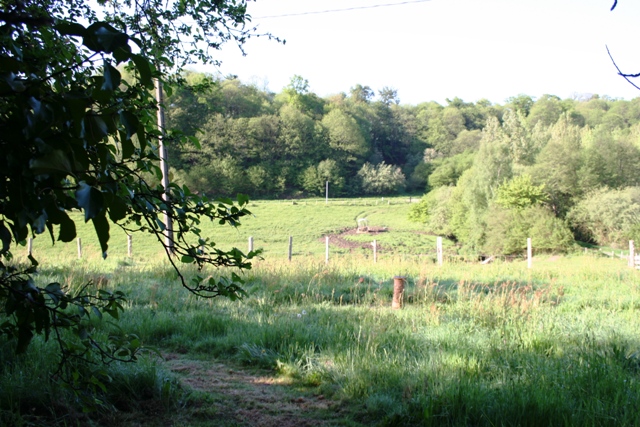 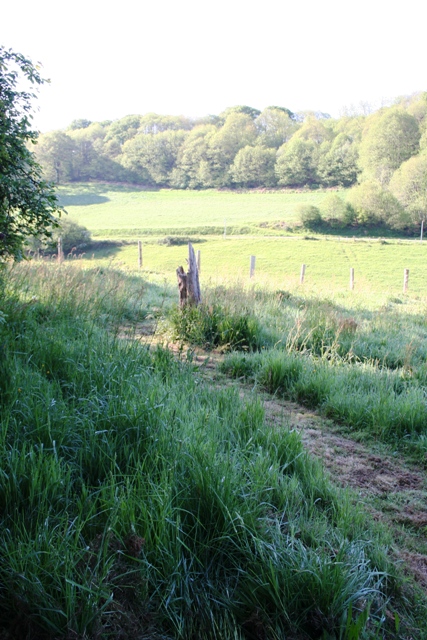 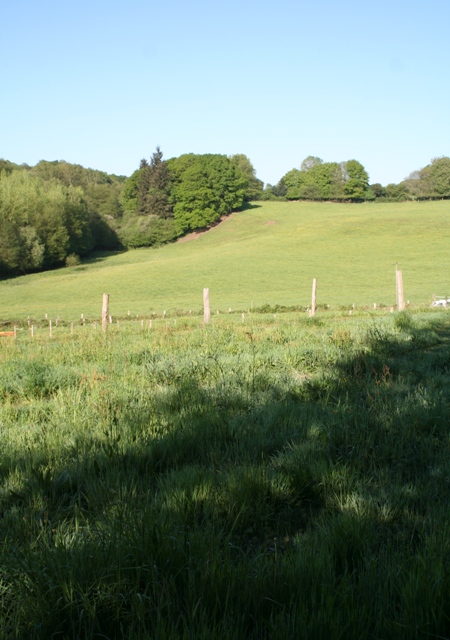 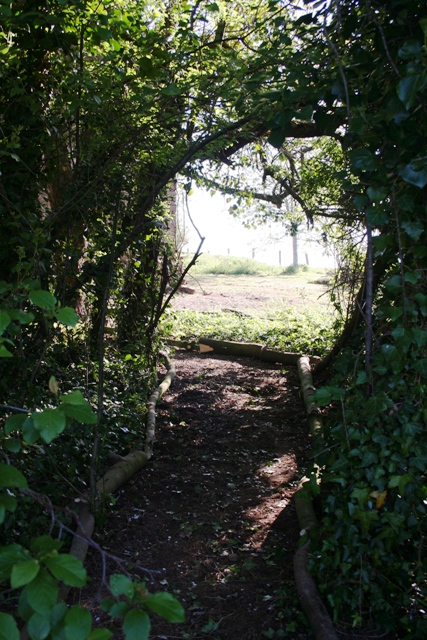