More administration, another step in the right direction

Proving where we live has proved to be difficult….

Today we were up relatively early to see if the Maire was in his office in the village.  We need to obtain the attestation certificate from him to prove where we live….  A couple of people were outside his office but when we stopped to ask if he would be there, they replied that he would be but they didn’t know where he was!

So, we went up to St Fraimbault to our nearest bakery and bought some croissants for breakfast…  We stopped again on the way back as there were the same two people talking to someone in a car, which was stopped in the middle of the road (only in France!).   As luck would have it, it was the Maire, back from his holiday in Spain – Olé!

He invited us into his office and when we (well, Edward, actually!), explained what we needed and that it was urgent, he said he’d have it ready for us later in the afternoon and all he needed was our passports and the rental agreement…. phew!

Back home I’d been keeping an eye on AngloInfo classifieds and found a set of 6 MultiYork dining chairs on offer for 150 Euros – as luck would have it, they were still for sale and we arranged to see them this evening…

At 3pm the Jaguar was booked in for it’s Contrôle Technique – we were nervous about it to say the least.  30 minutes later and having spent a small fortune on a special diet for Colin, we were back to hear the bad news…. it had passed!!!  What a relief!  A few advisory notes but we had the all important sticker in the window, so now we can register both cars at the same time, as long as we can get the documentation from the Maire…

We stopped at the Maire’s office on the way back and thankfully, he had the document ready for us…. 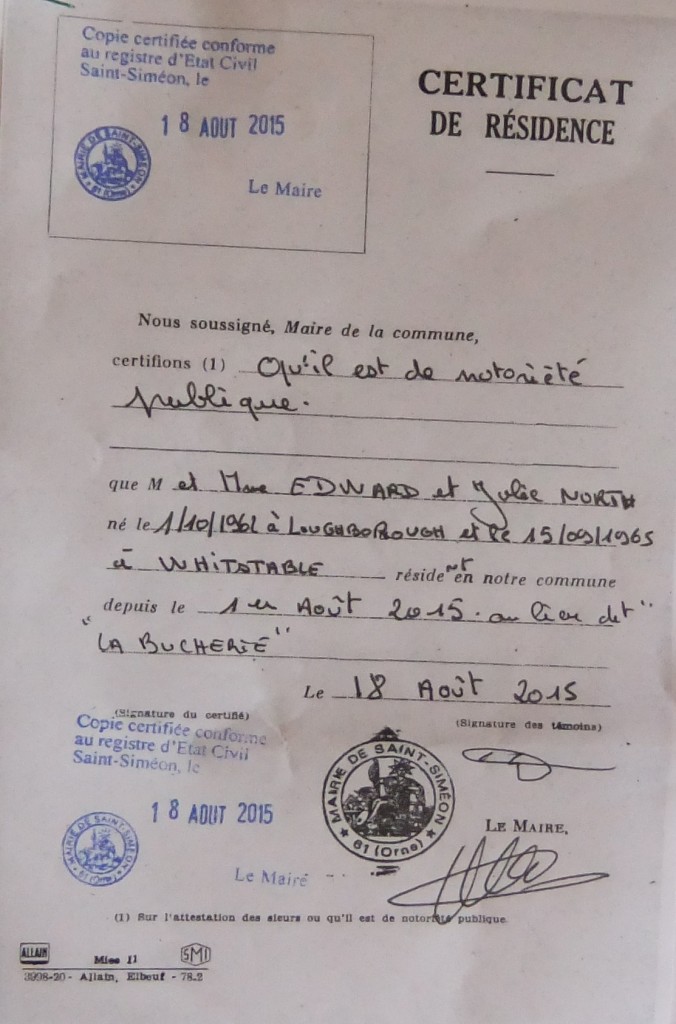 We’ve spent the afternoon catching up on emails, still no news on when we might sign the Compromis…. then we were out again to look at the dining chairs.  They were perfect and an absolute snip at the price, plus, the couple kindly agreed to store them for us while we are ready to take them over to the new house!

On the way back, we received an email from the estate agent – she now has all the paperwork in place and she has contacted the vendors to see if they will be available to sign the Compromis de Vente on Friday or Saturday!  That means, with luck, we should be able to sign early next week – yey!!

So, a good day by anyone’s standards:0)

We had a giggle when we did a search on google for the location of the house where the dining chairs were – it said ’21 mins with no traffic’ – there’s never any traffic out here, especially in the countryside!  It’s just such a lovely place to drive….. ♥