Clearing the woodland walk of ivy and removing deadwood and brambles has created a huge pile of rubbish to dispose of.  In England, I suppose we’d have taken numerous trips to the local skip with everything piled into the car, but here we have no neighbours to annoy, and so, earlier this week, when we were nearing the end of the day, Edward put a match to the mammoth bonfire I had built! 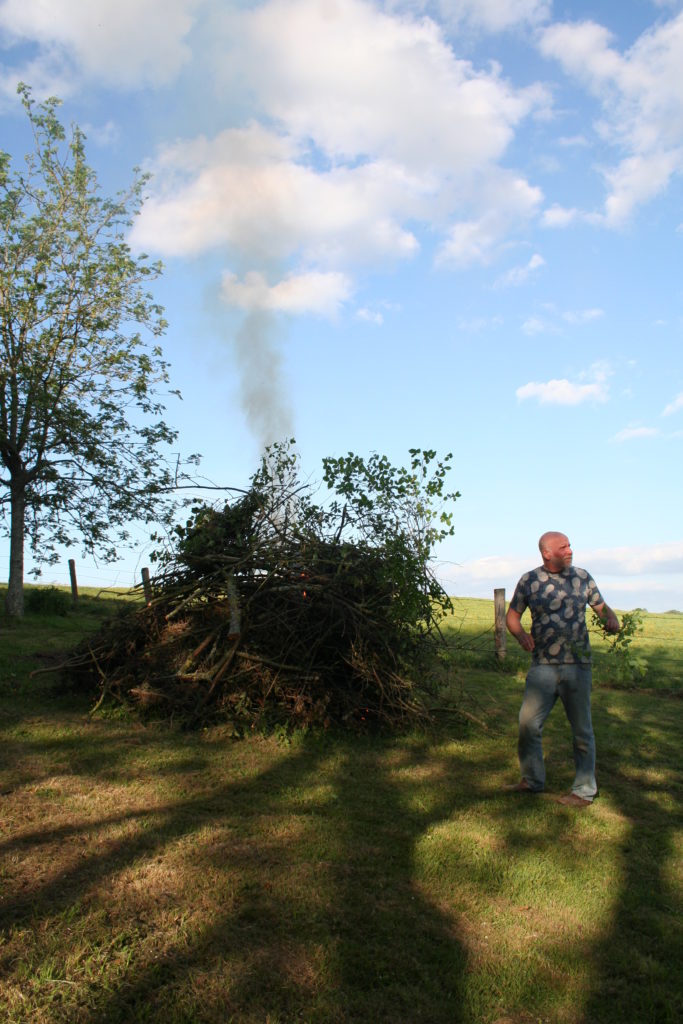 It had been a good day spent clearing more rubbish from the woodland, while Edward made a start digging over the first vegetable patch…. We think there will be room for runner beans and courgettes in this bed alone 🙂 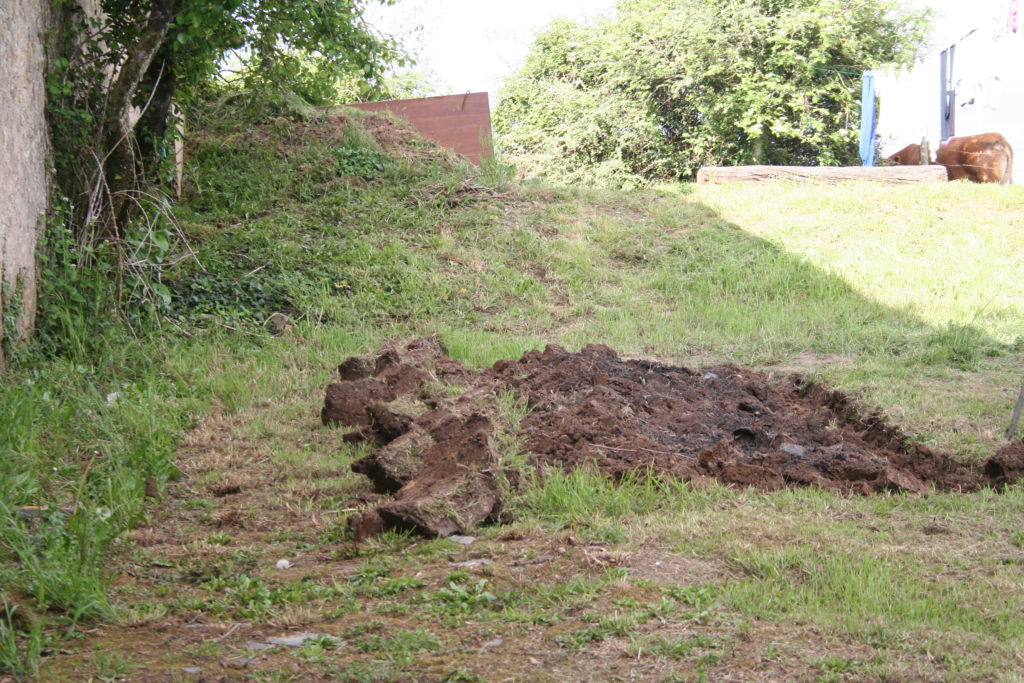 The bonfire went well and after the majority had been burnt, we went for a short walk up the track to see the sunset…. Looking back at the house, we saw that the setting sun had found a gap in the trees to shine on the doorway of the bedroom at the end of the house, enchanting, while in the background, we could see the smoke from the bonfire! 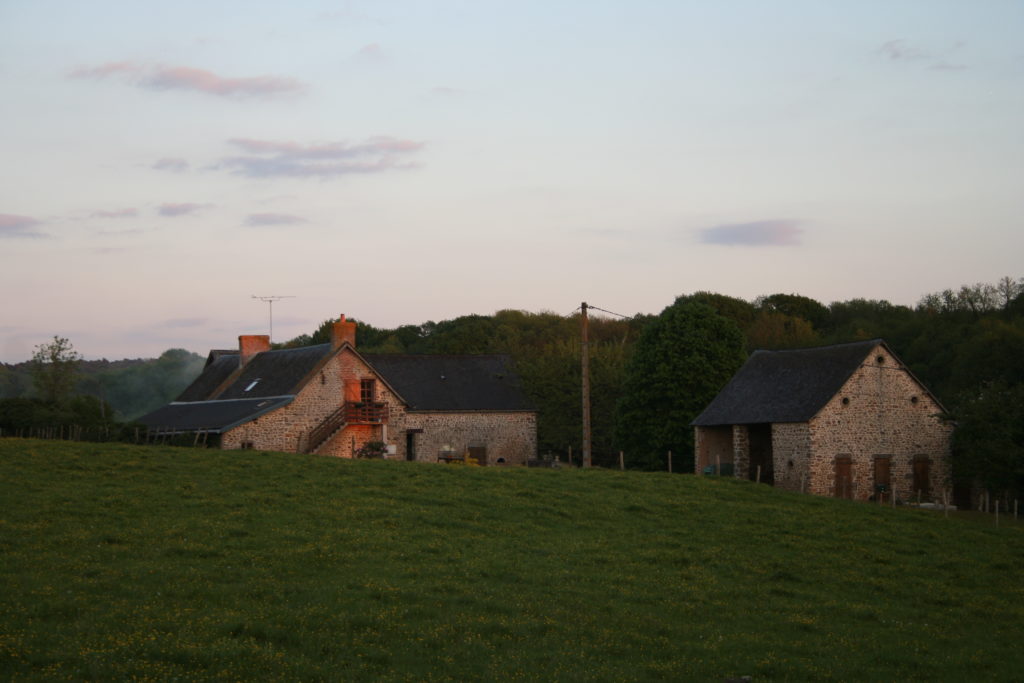 By the time we were ready to turn in, the fire was done but on checking in the morning, amazingly, it was still hot enough to start another small fire to burn more deadwood. 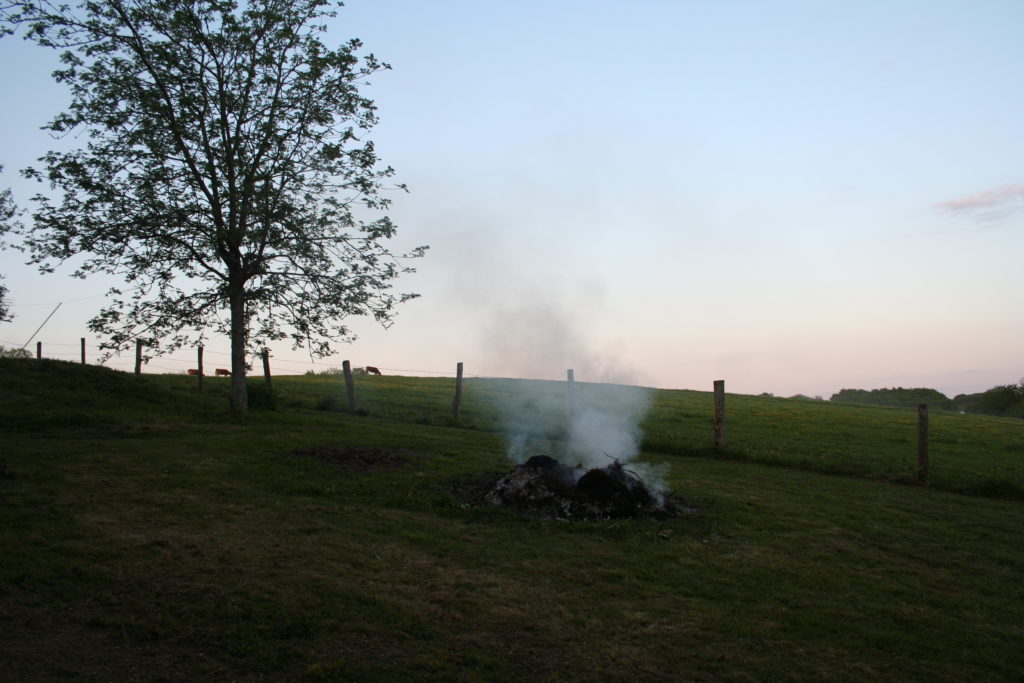 Although there is still plenty to do in the woodland, I moved on to weed the border I’d made some time ago behind the small barn.  Long-term, we have had various ideas to make an arbour or framework along this side of the barn, as the views from here are just lovely, looking out over the fields below and opposite. In the meantime, I made an effort to tidy up the rest of the area, edging the smaller borders with bricks I’d unearthed previously.  I also set up the wig-wam to support some sweet peas, while Edward made new trellis for more sweet peas to grow against, on the wall around the corner. 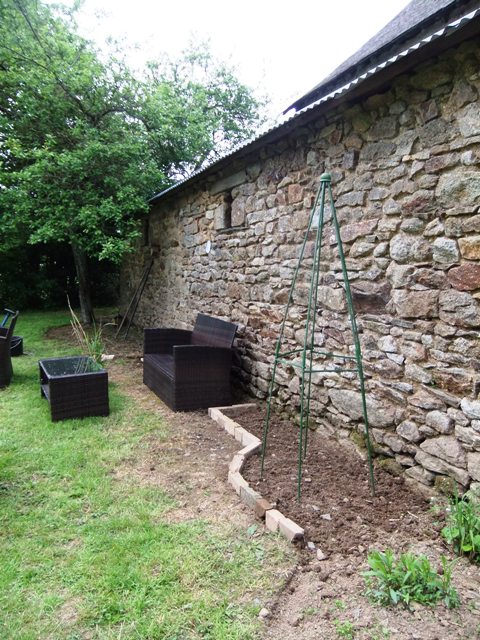 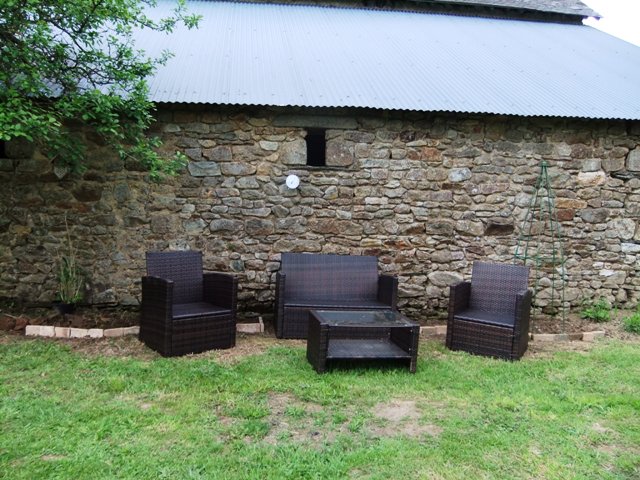 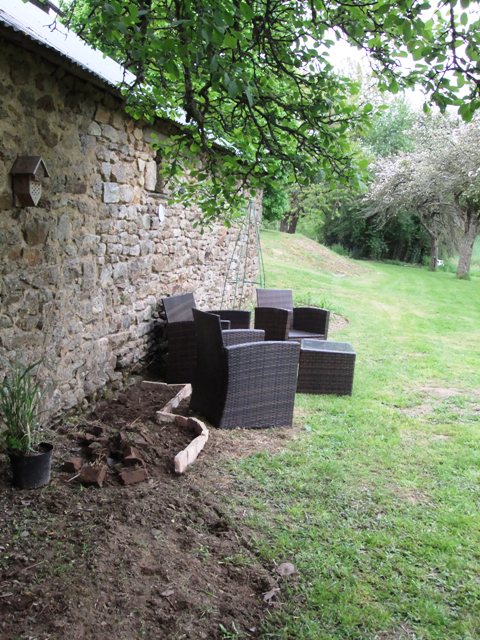 I seem to flit from one job to another – there are so many distractions in such a big garden! While in the potting shed, I came across my old insect hotels and bird box – they have now been relocated either on or near the small barn 🙂 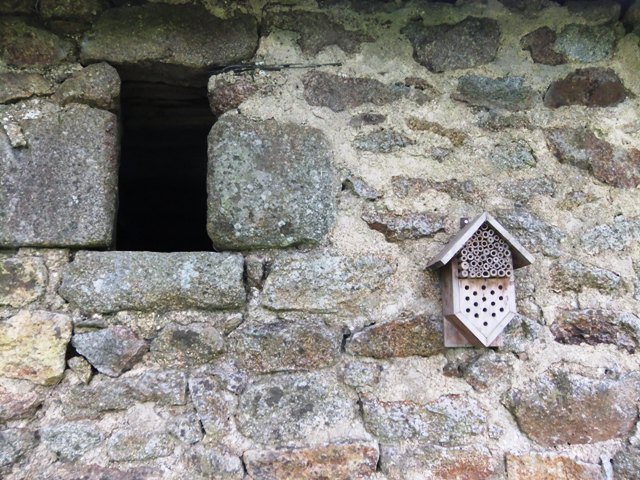 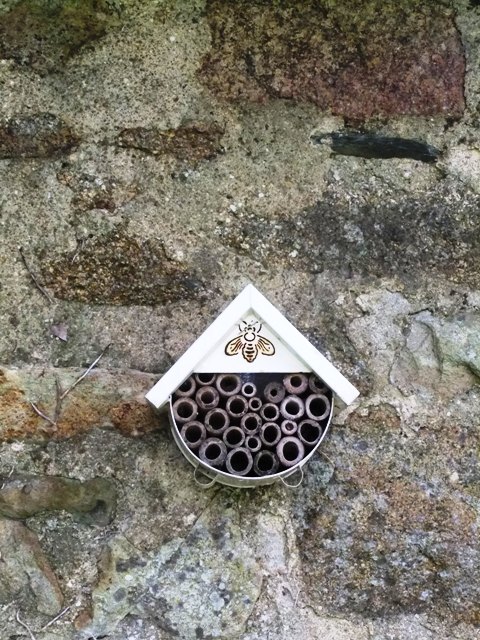 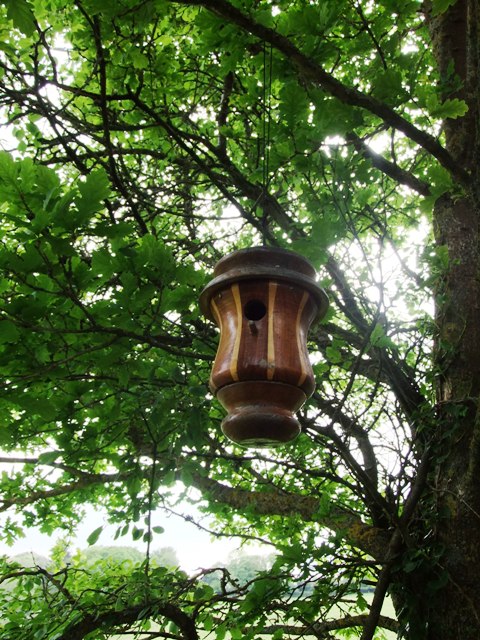 Yesterday we were expecting the new slates for the house roof to be delivered – we’d been told the driver would be with us by 8am…. So we were up reasonably early, not easy after a late night of playing cards with M and Mme Ory!!!

Outside, I just caught a glimpse of Colin dashing from the small barn and under the lime tree, following in hot pursuit by a very determined swallow!! I thought that was it but was entertained again when he made another run for it to the big barn, while the swallow buzzed him!! It was good to see the swallows having the upper hand for a change. Poor Colin was hiding under the car when I went to find him afterwards!!

Just after 8am, we heard a large vehicle coming up the drive – the slates were here!! But the truck was huge – surely too long to take the right-angled bend and the end of the drive??? 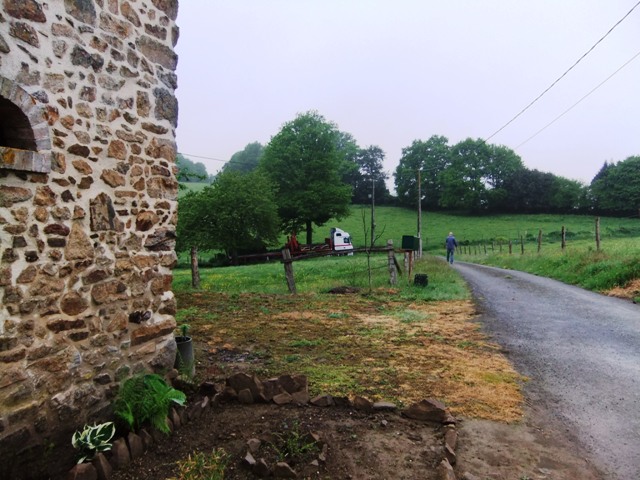 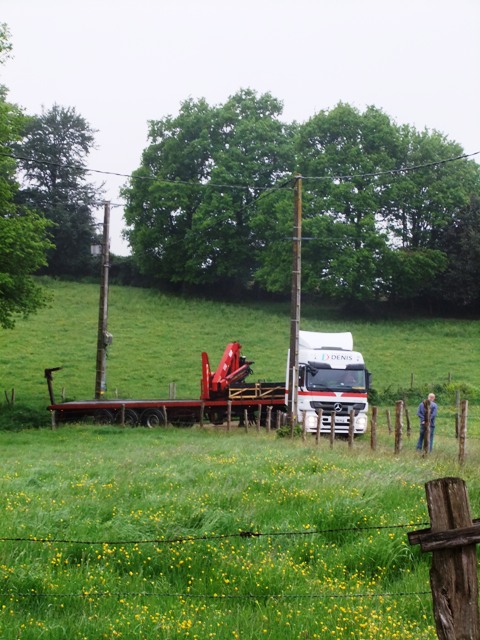 We needn’t have worried, the skilled driver, after a slippery moment on the corner (one fence post was dislodged), made it round and up the drive – although, he looked relieved when he jumped down from the cab!! 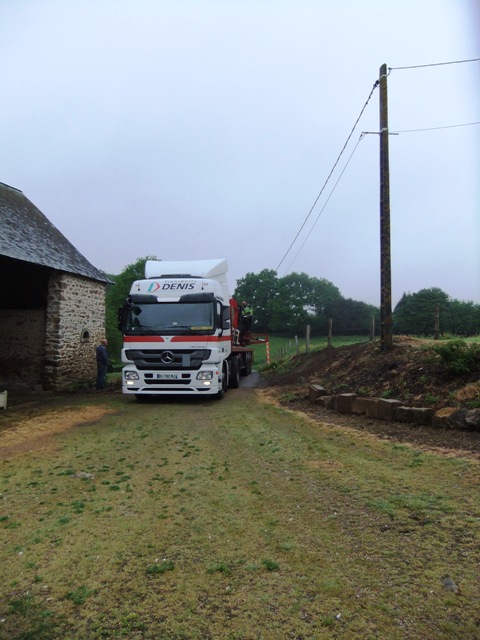 Before we knew it, 6 crates of slates were loaded off the truck… 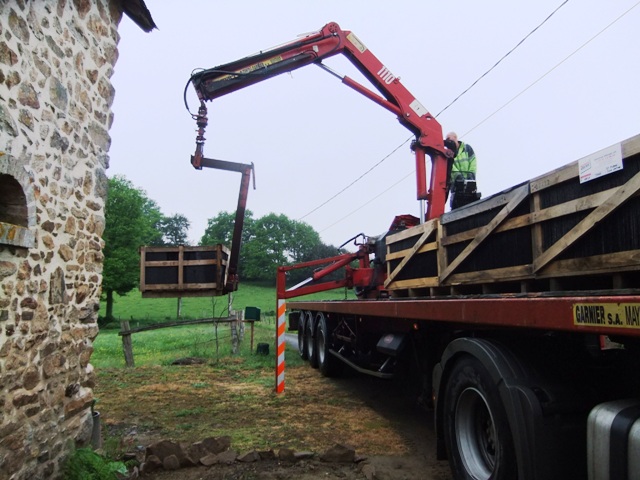 Over coffee, we learnt his name was Olivier and that not only did he drive a big truck but he was a Charolaise farmer too… We had a nice chat with him – he said the slates were good quality and that he’d bought huge quantities of them to recover his own farm and outbuildings, which was reassuring.  He also said that they delivered a lot to chateaux too.  Before leaving, we had exchanged numbers with him – it’s possible we shall keep in touch 🙂

Later in the afternoon, as luck would have it, Hervé, the farmer who has the cattle in the field next to our house, arrived to check on them.  I called out to say hello and told him about the fence post that had been moved by the big truck.  He was all smiles, as usual, it wasn’t a problem as the cows weren’t in that section of field and he’d be able to reset it.  What a lovely man!

I spent much of the afternoon seed sowing and potting up seedlings.  When we were in Gorron, last weekend, Edward picked up a cone that had dropped from a Magnolia grandiflora tree in the square.

Edward looked up how to propagate them from seed and we decided to give it a go.  It’s likely the seeds had been vernalised naturally, so it was just a case of removing the seeds from the cone and sowing them immediately….. 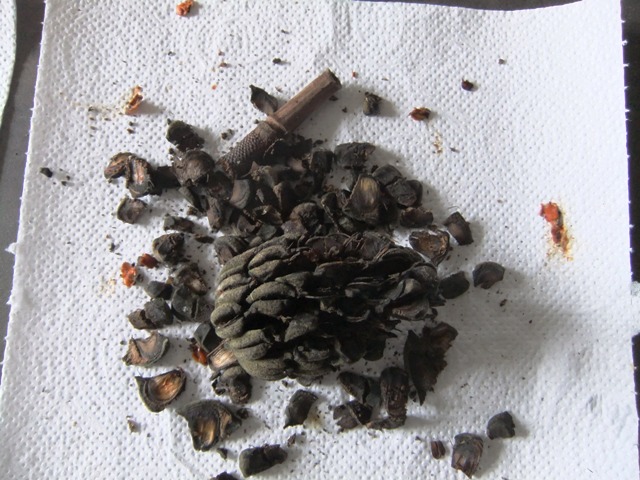 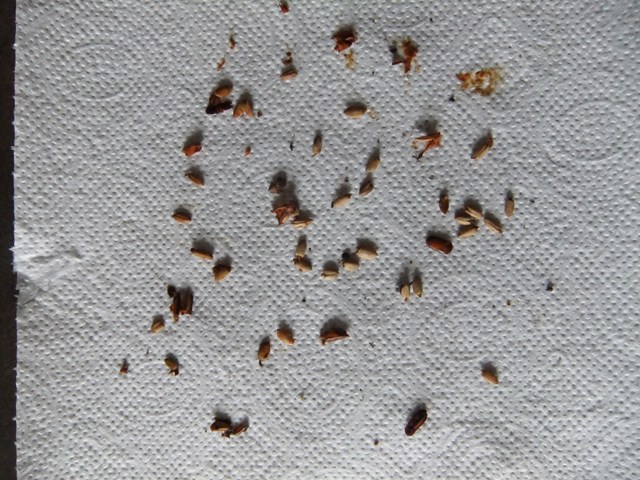 Fingers crossed for some success!

I also sowed some Cersis seeds, which we’d taken from a tree at the Marie in St Pierre-sur-Orthe – these trees are all flowering at the moment and are just stunning with their masses of purple pea-like flowers…

Years ago, probably when I used to have a glasshouse in my garden in England, I used to collect seeds from the flowering perennials.  I found a tin of them in amongst my gardening bits and bobs the other day, all neatly saved and labelled in small brown envelopes… honesty, aquilegias, lotus, purple-leaved cow parsley and red-leaved plantains, to name just a few.  All would be wonderful additions to the garden, but whether any will germinate is another question – the oldest were saved in 1996!!!  I think it will take more than crossed fingers, but they will have two chances, they’re now in the greenhouse with other seedlings of summer bedding that have already germinated.  ♥ 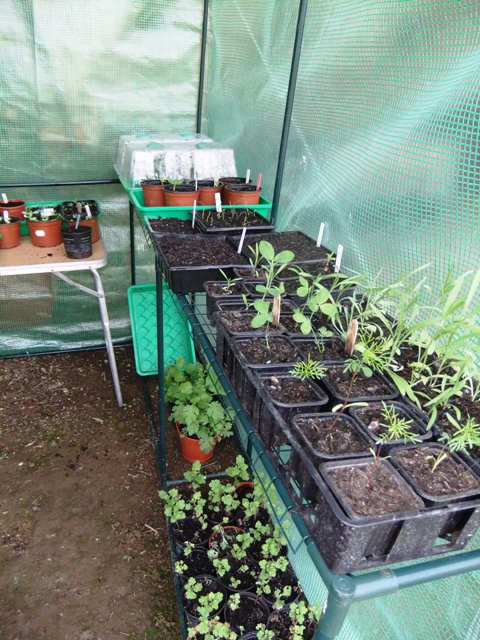