While Edward has continued works in the upstairs toilet, I decided to resume work on the old stone steps at the end of the terrace.

When we first arrived at La Biochère, there was a huge cherry laurel growing at the end of the house on the corner. It cut out most of the light from the living room window and seemed to be a big dark space, so Edward was keen to take it out, which he did at the earliest opportunity! 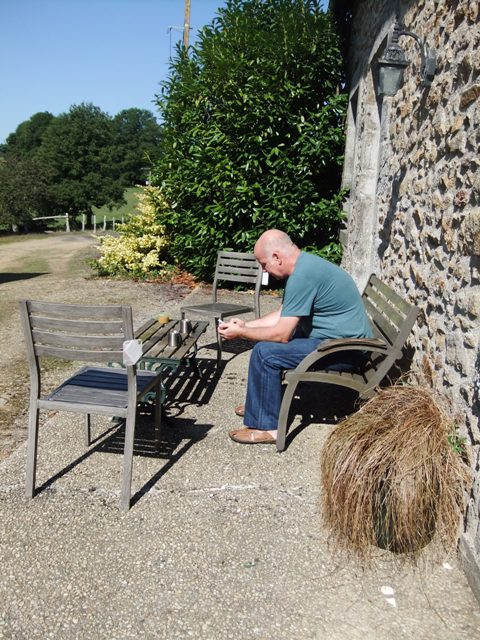 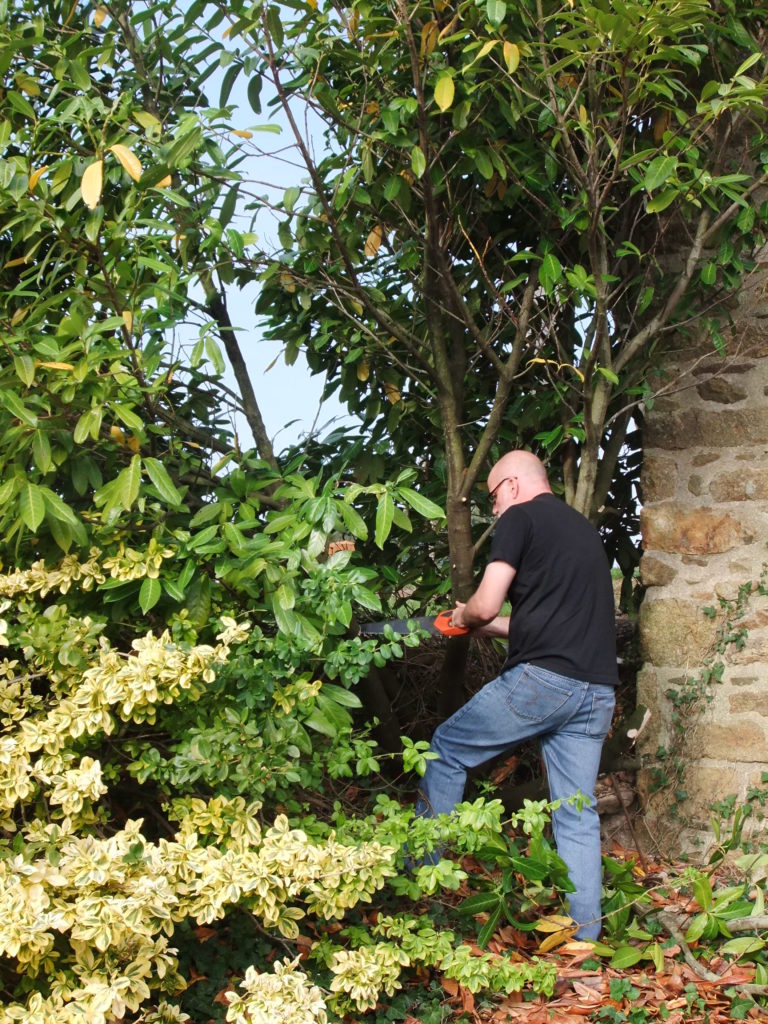 By November 2015, while clearing the leaves that had been left behind, I discovered some old stone steps leading up to the top lawn.  M. Ory came to help with his tractor to take out the remaining stump but it was so well rooted, we had to leave quite a lot of it in situ… 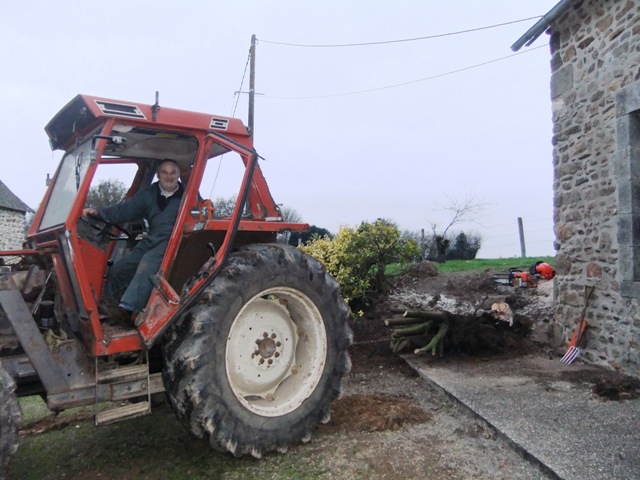 And the last few steps were dislodged from their position. 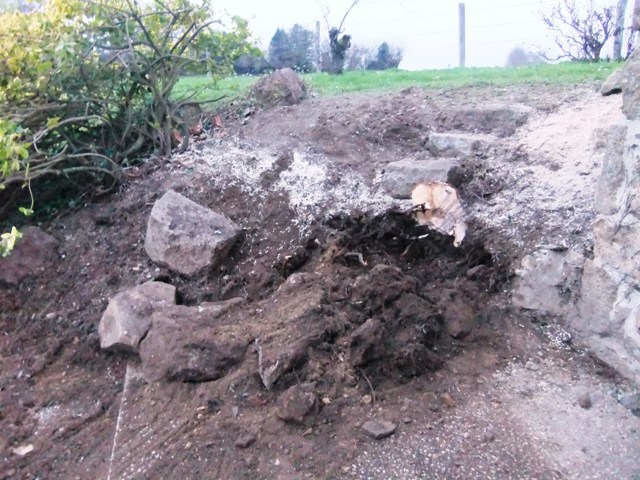 Over the coming weeks and months, our priorities changed and the steps were temporarily forgotten, so it was nice to finally get back to them this spring…..

Firstly, I reset the two dislodged steps, then set about terracing the bank to make for easier planting…. 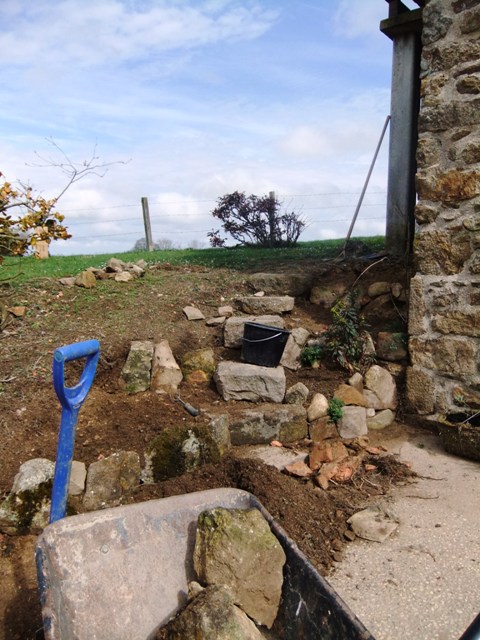 It was much harder than I expected – the bank seemed to be some sort of spoil heap, full of bricks, rubble and large stones, probably dumped after the extension was built around 20-25 years ago. Each jarring forkful produced more in the way of rubbish to dispose of than soil. Several wheel barrow loads of stones and bricks have been deposited at the end of the big barn, until we can find use for them…

I re-used some of the stones that I’d dug up from the bank but larger ones were taken from the rock pile in one of the fields nearby, which the farmer had kindly given us permission to use 🙂 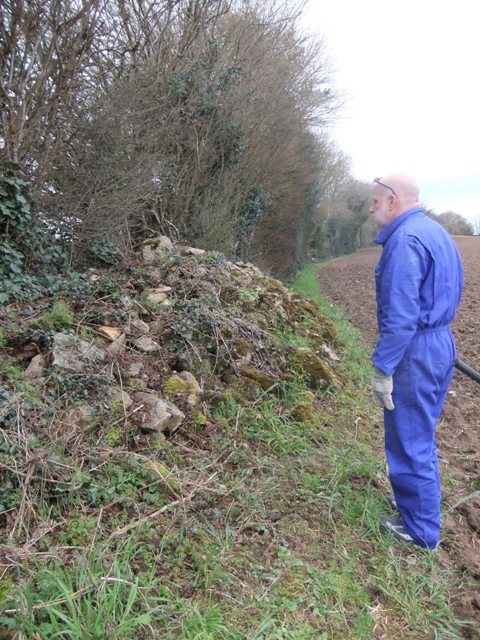 It was tough collecting the larger rocks…. 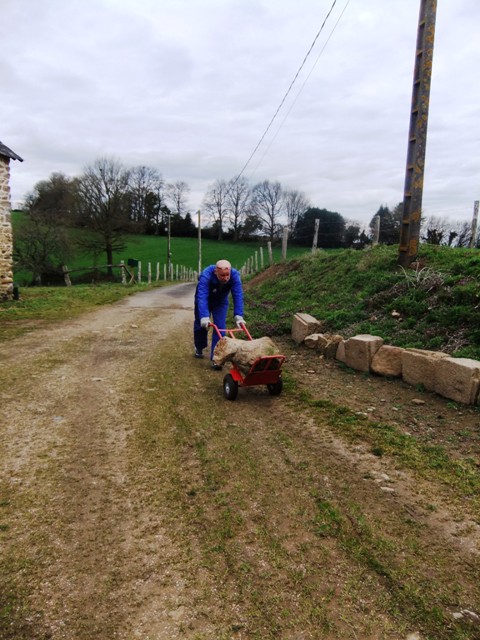 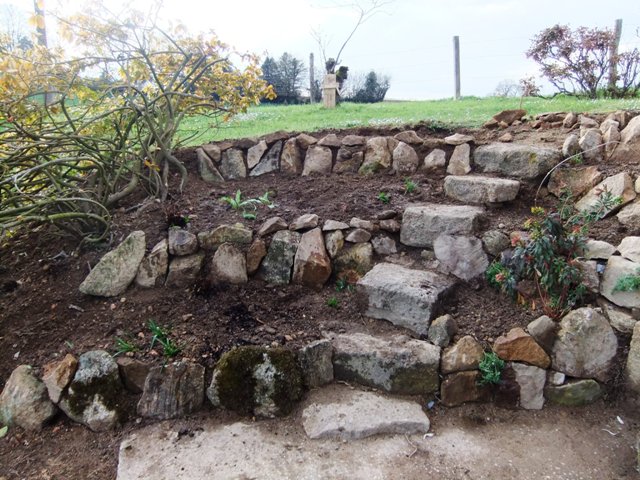 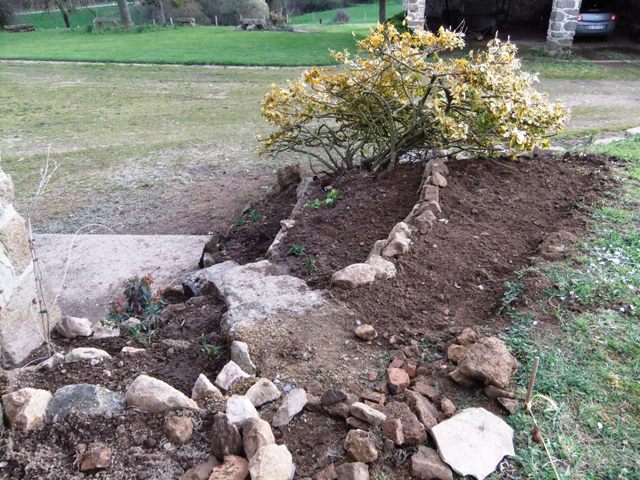 When I reached the top of the bank, one thing seemed to lead to another. There were only three more days before my parents arrived but the weather was holding up and I had the bit between my teeth!

The scrubby bit of lawn alongside the outside steps to the guest bedroom clearly needed to be tidied up, so I started to make a path and a narrow border – eventually, when the new roof is sorted, I’ll be using the old slates, broken up, for pathways and other areas that need hard landscaping…. 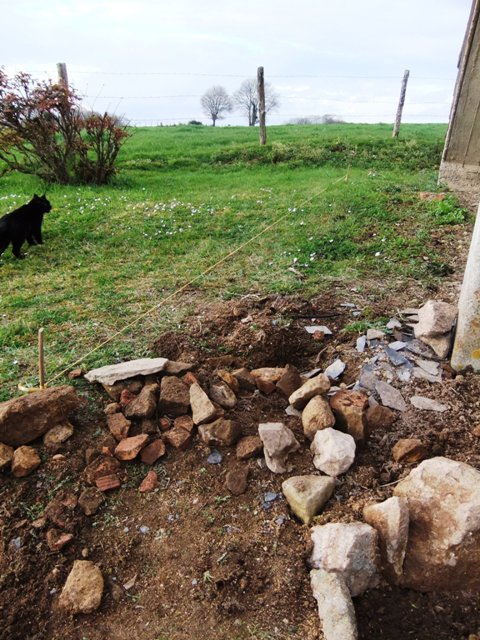 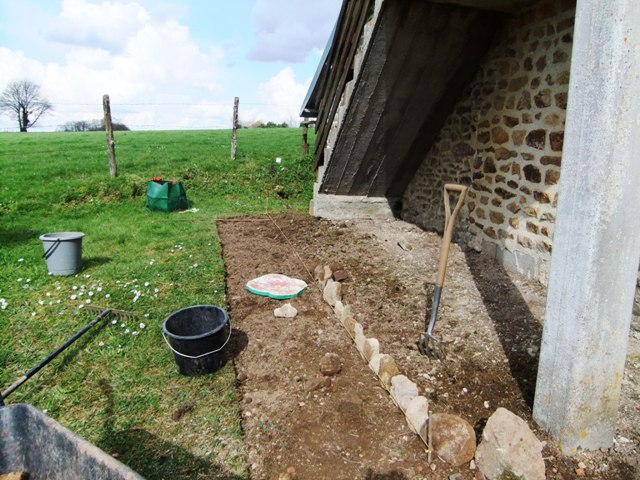 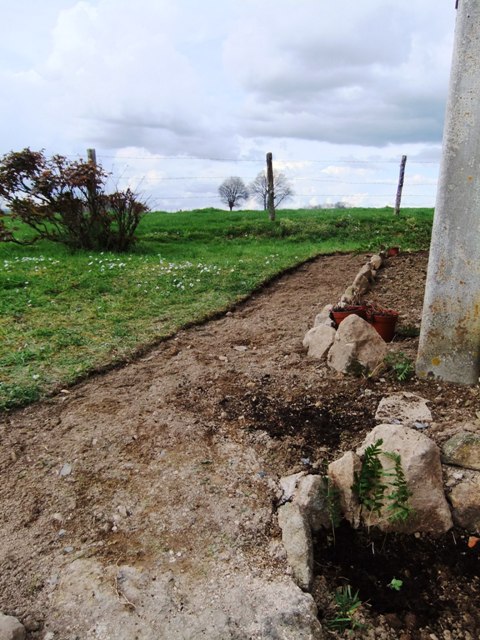 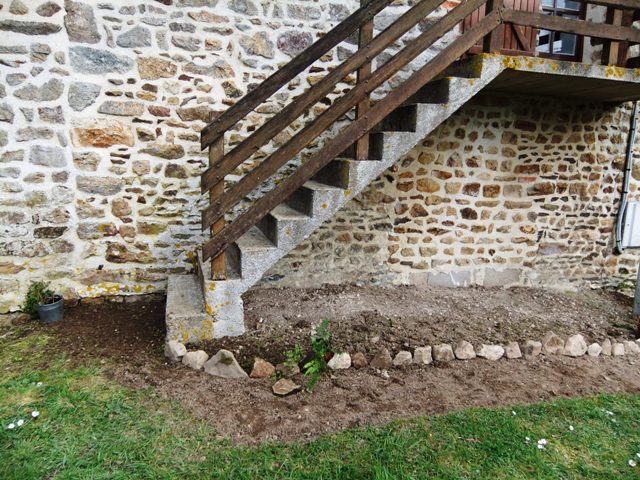 Despite the tonnes of rubble that have been removed, it’s been a satisfying little project and will lead on to more in this area when we return to it.

The day before my parents’ arrival, we had a last push to get the lawns mown and the rough patches strimmed – it made quite a difference to the overall appearance of the place and we enjoyed a stroll around the ‘grounds’ in the evening to see the fruits of our labours… 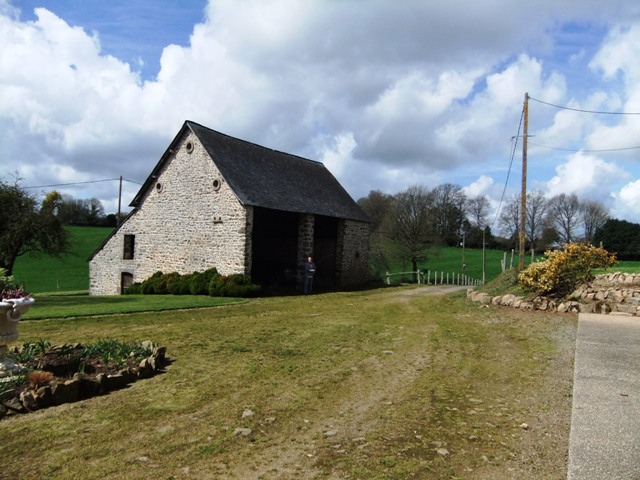 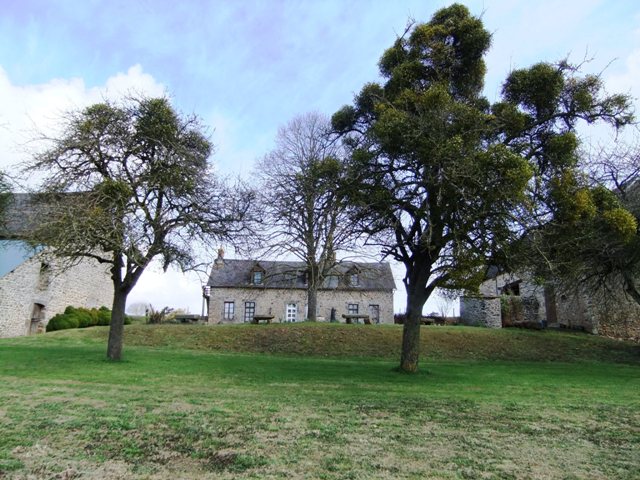 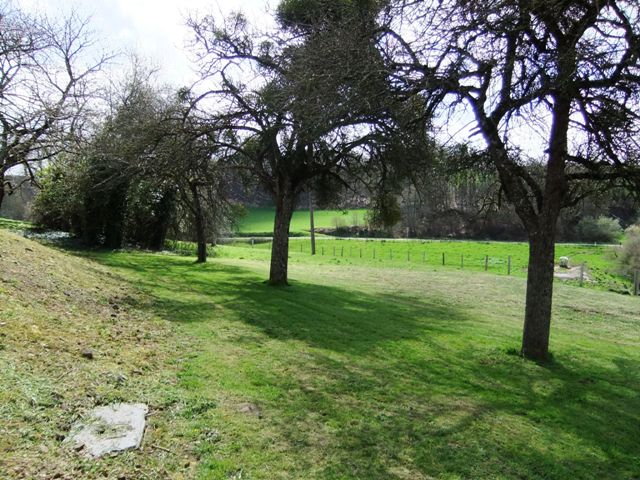 While Colin and Jim lounged in the sunshine like two peas in a pod! ♥ 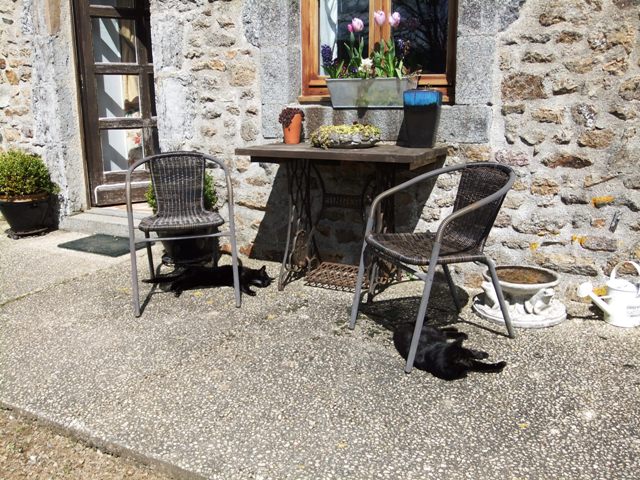