We’ve had a few dry, sunny days – very cold, with a north-easterly wind, but it’s made all the difference for DIYing and gardening.  Traipsing back and forth from Edward’s workshop to the house is less taxing and we’re not trailing mud from the yard everywhere.  Plus, it’s just lovely to see the sun shining – it certainly lifts our spirits!

A bedroom is finished!

So, despite Colin’s best efforts to disrupt proceedings, the first bedroom was finally completed in  a few days – hoorah!!! 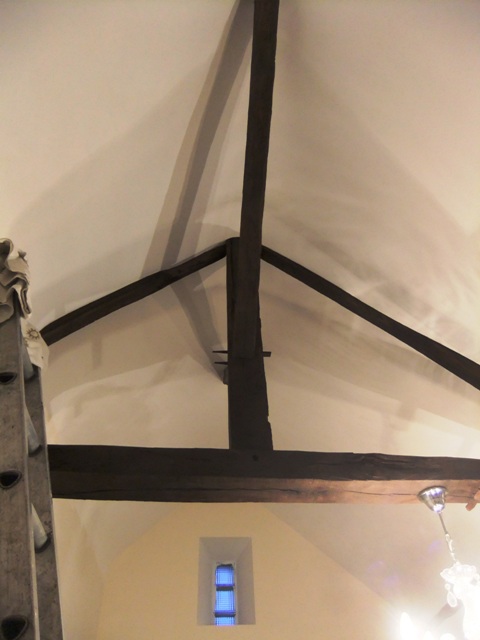 The high ceiling made painting difficult but the long ladders were useful and I was also able to treat the beams with teak oil.

After painting the ceiling white and the walls magnolia and the woodwork white satin, it was time to start papering…. I had been saving some rolls that I had originally bought for one of the bedrooms in our house in England, when we had the extension done, but in the end, I didn’t use them.  So, some 5 years later – voila!  It’s perfect for this room – the photos don’t do it justice but the pattern is set off by a cream background, the silver and gold stems go perfectly with the chandelier and wall lights, while the green cherry flowers add just enough of a hint of green to compliment my green glassware and other bits and pieces…. 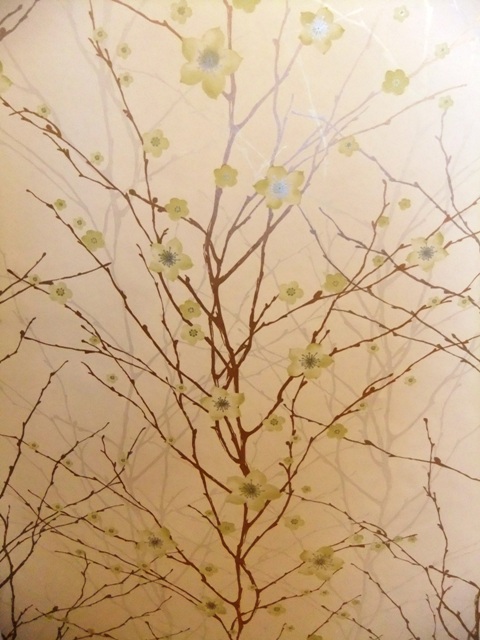 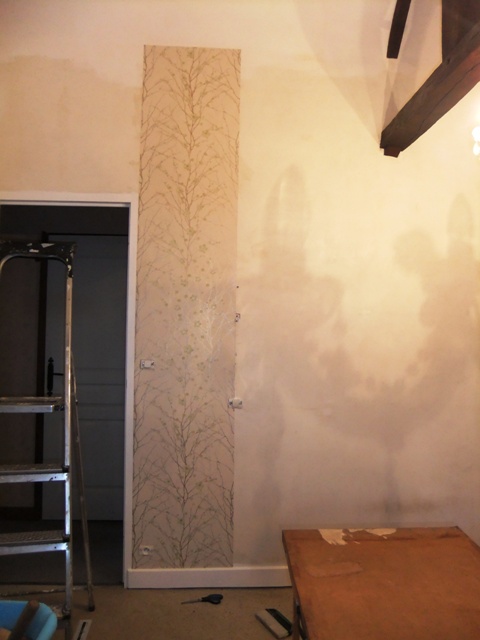 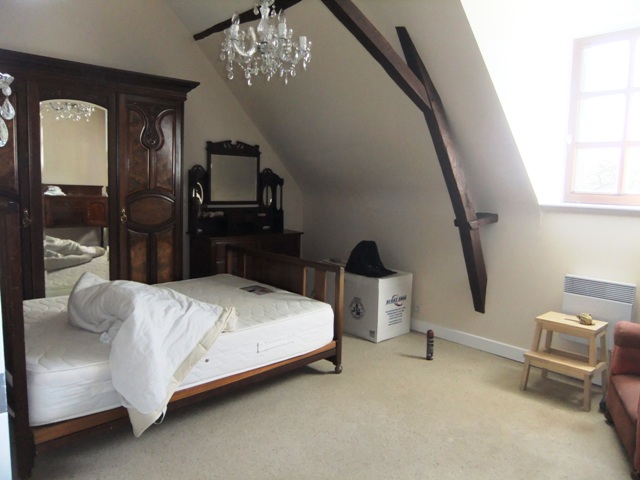 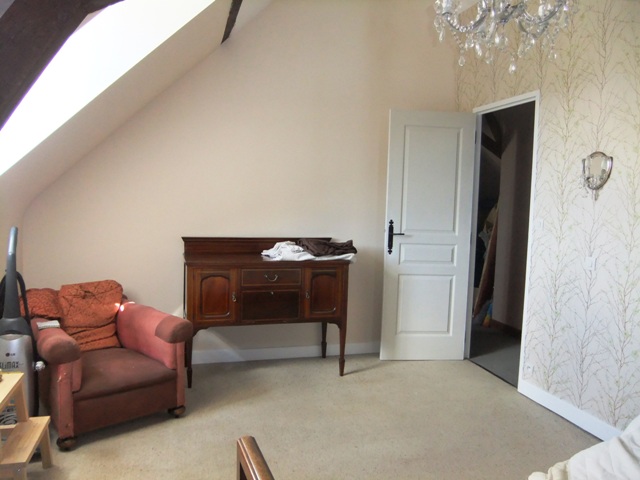 Less fun was trying to find homes for five boxes of shoes, clothes and ornaments…. but by the weekend it was done and I love it!  It’s so civilised now that everything has a place, what luxury 🙂 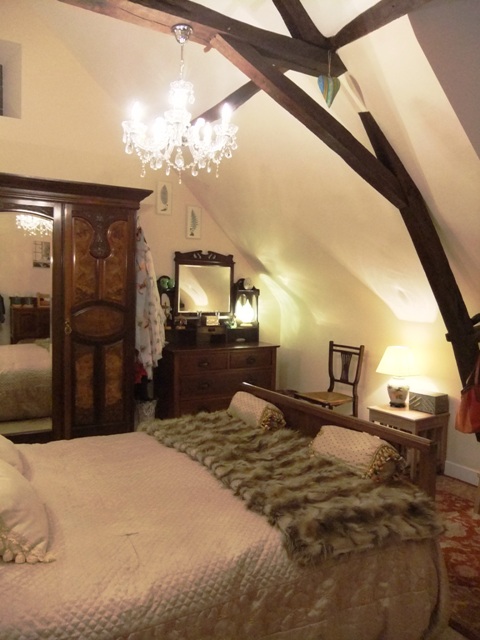 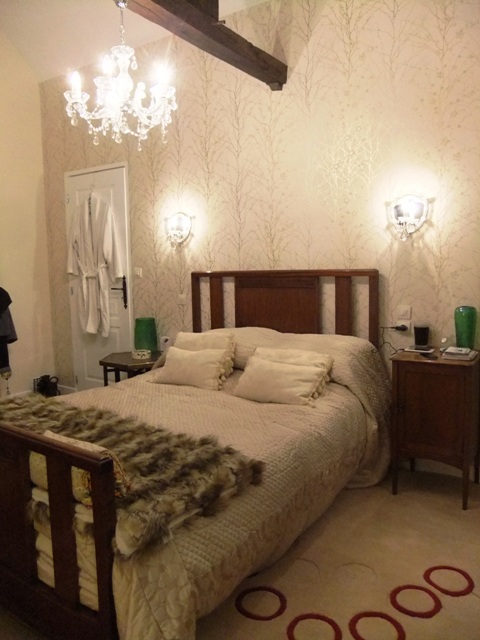 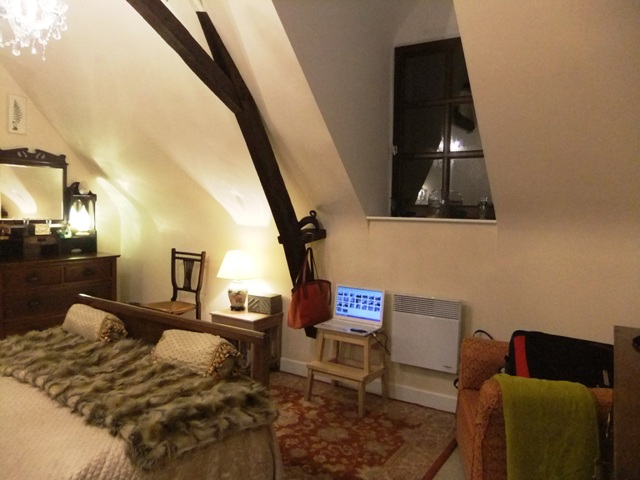 Work starts in the bathroom

While I was concentrating on the bedroom, Edward made a start on the bathroom.  It’s ceiling is really high and goes up into the eaves, which isn’t such useful space and takes more to heat… 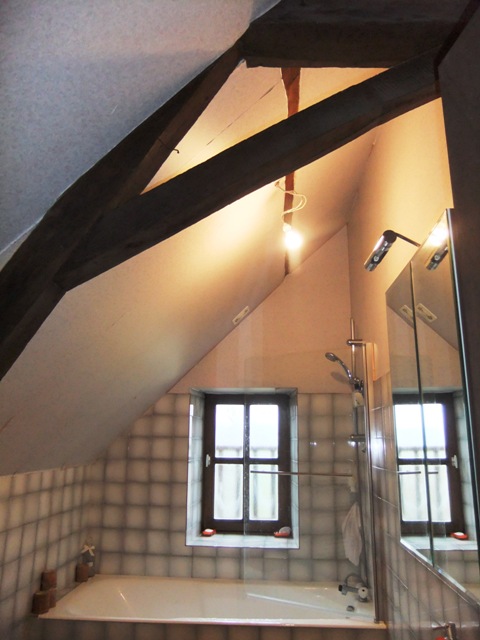 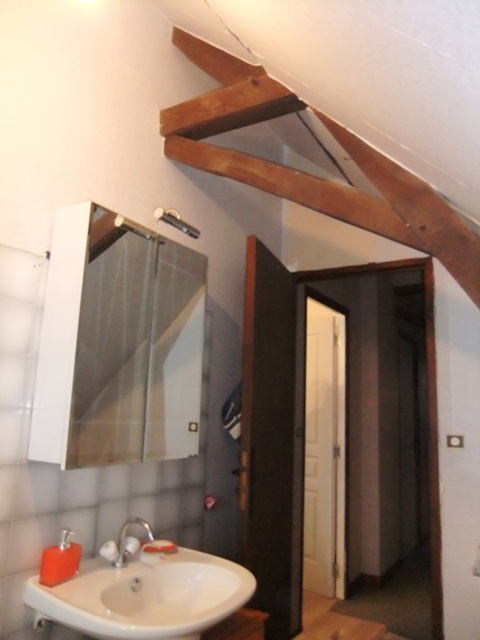 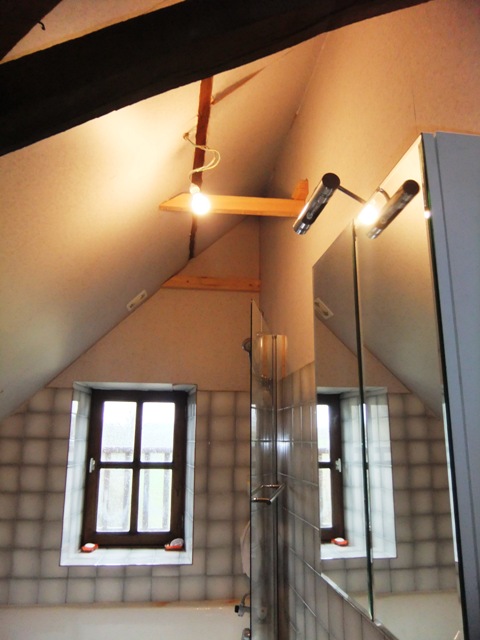 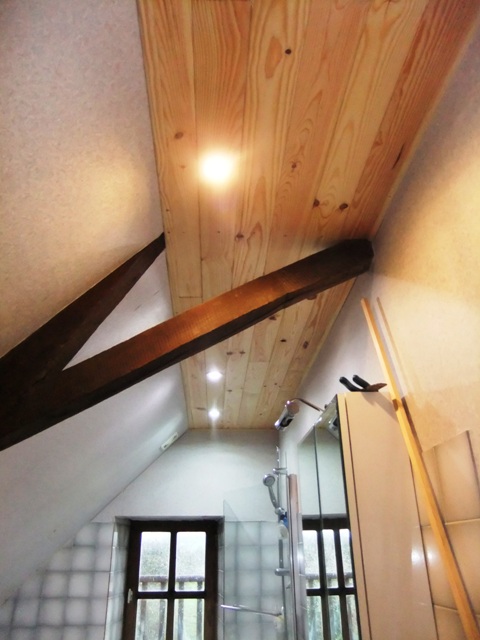 The plan was to move into the next bedroom to start stripping wallpaper, but by Thursday, the sun was shining and was tempting us back out into the garden…. Chores and shopping took out most of the morning but as it was still such a beautiful day, we decided to get out there!

After having chopped down the remainder of the bay trees at the end of the big barn, Edward had prepared all the rubbish for the next bonfire…. 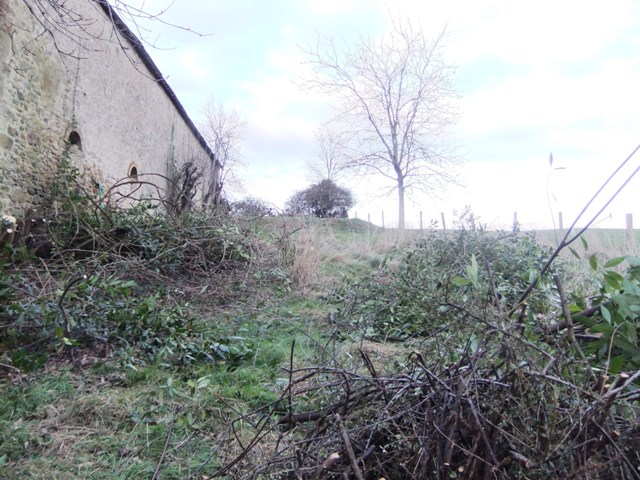 It was soon underway …. 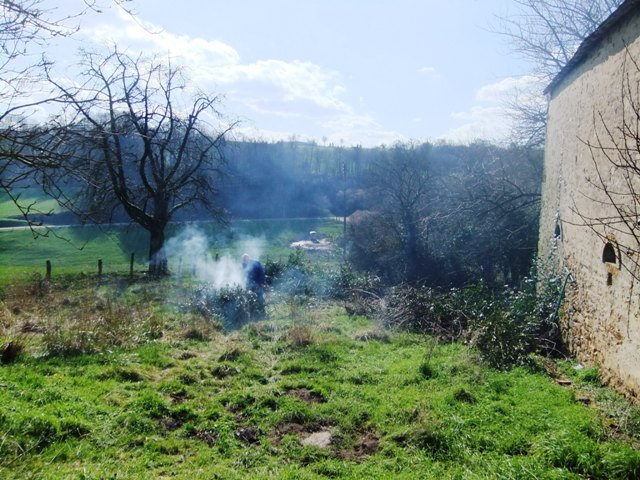 Amazingly, all the rubbish was burnt by the time we finished for the day and Mouse seemed happy to keep him company throughout the process! 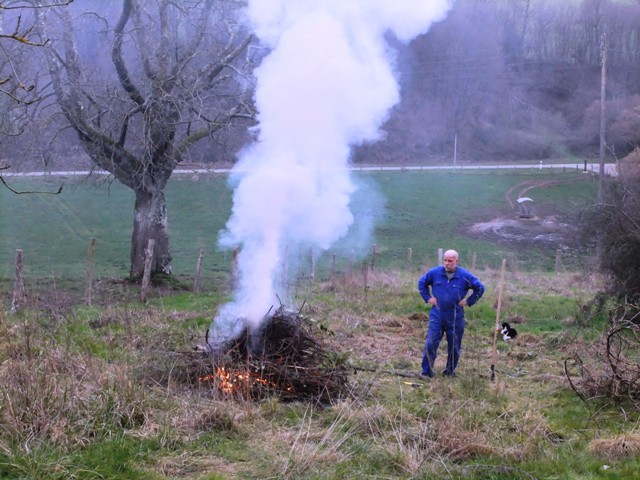 In the meantime, I returned to the area that had been covered by cotoneaster and dug out the remaining stubborn roots.  Eventually, there was enough of an area cleared to start planning the planting of this border… 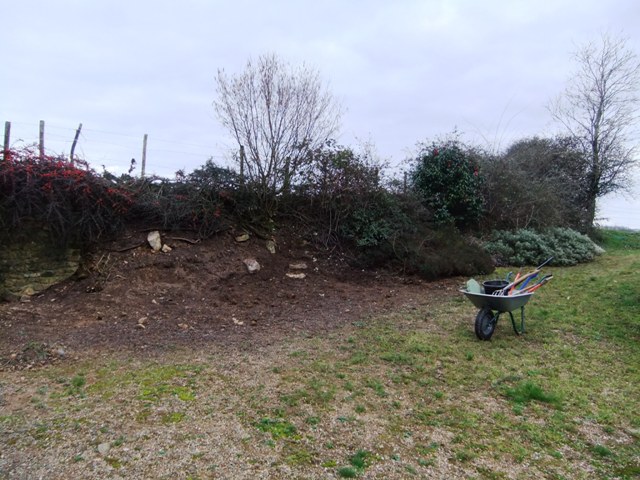 First up was re-setting the bird bath, which would provide a focal point.  Stones found around the garden were useful for making the border edging, while slates that have fallen from the barn roof will be perfect for covering the ‘pathway’, once broken up a little more…. 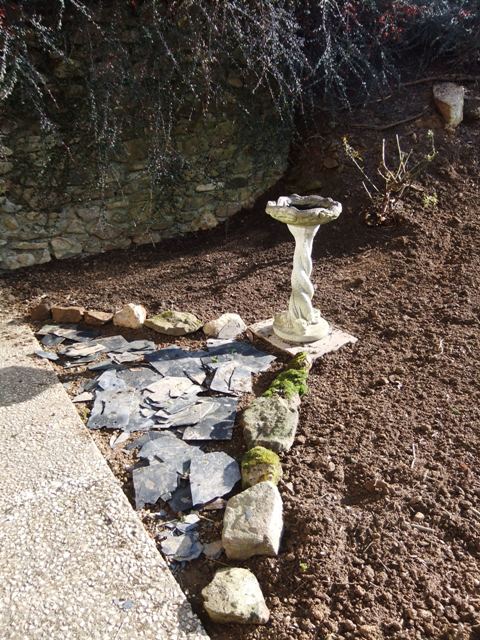 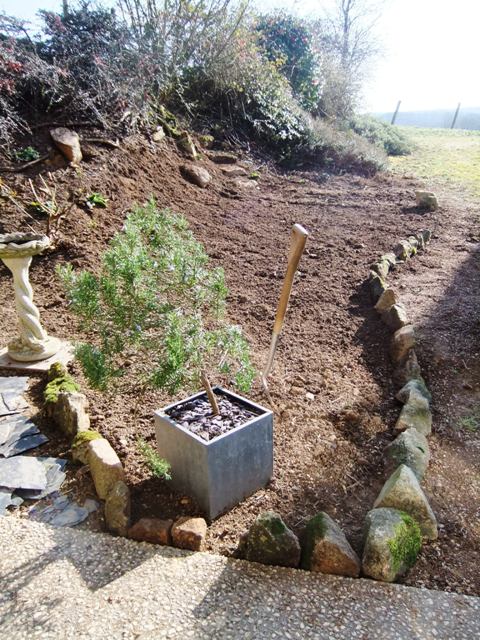 Of course, I had help from Colin – he hates being left out!!!! 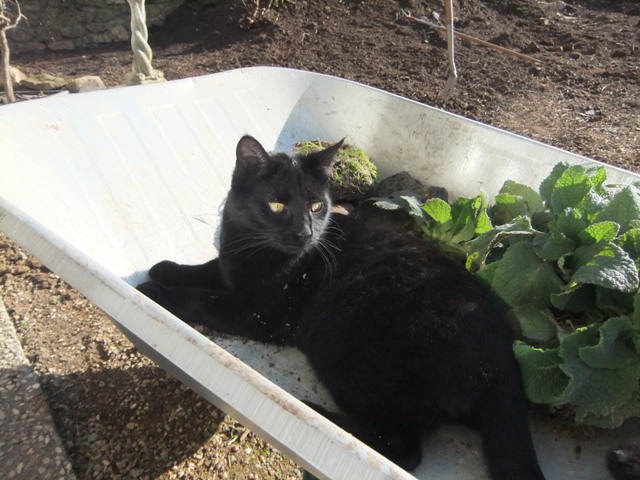 It was then time to set out some of the plants to fill the space – they have been in crates ever since we brought them over from the UK, but I was desperate to get them into the ground before we started losing them. 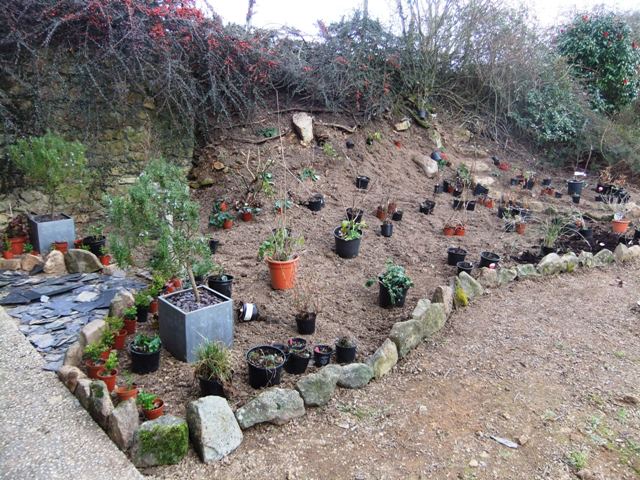 It took all afternoon and into the evening to get them in the ground!  Thankfully, it’s still light at 7pm now but I couldn’t get a photo until the morning!! 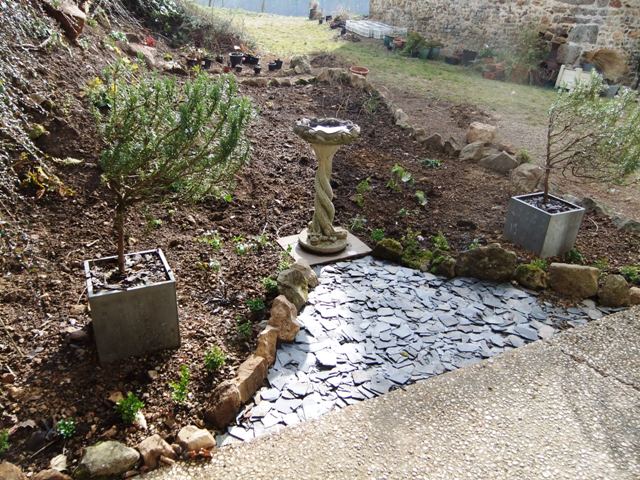 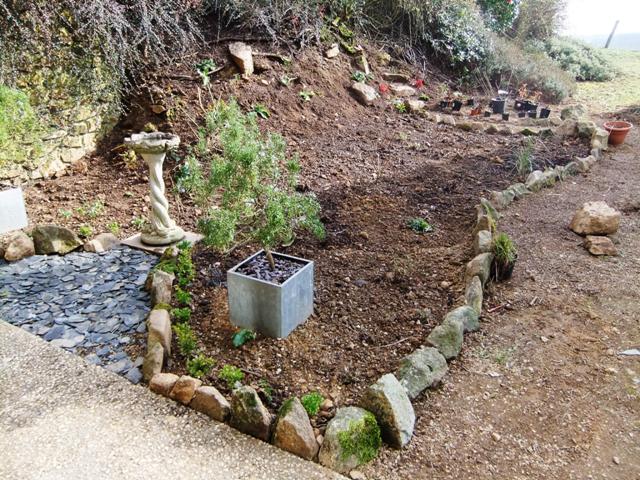