The weather has changed – wet, cold and very windy – friends in England say we’re on the receiving end of some hurricanes.  We’re really pleased that we took advantage of the better weather last week to get the island around the urn finished, mow and edge the lawn and prepare the bank for further cultivation – it would be impossible to do it in the weather we have had for the rest of the week.

Our enthusiasm for the DIY inside the house comes and goes.  Usually, we are ready to crack on and with Christmas only around the corner, we have set ourselves a number of targets to ensure we will be comfortable for a few days off over the festive season.  However, occasionally, it seems, the tasks get the better of us, especially when the weather is so awful, and work slows down or comes to a halt altogether!

We have been waiting for the electrician, M Fouquet, to come back and sort out the lights and sockets in Edward’s workshop – this will help enormously for all the sawing and constructing that’s required for the on-going kitchen installation.  Sadly, we haven’t seen him since he popped over a week ago with the promise to return at the beginning of last week!

Developments in the kitchens

Talking of the kitchen, we found we had another wall cabinet, which was a bonus and has now been erected in the back kitchen.  Edward has also taken time out of work in the main kitchen to put up some cupboards we bought from the Brico Depot in Le Mans, for the laundry room.  It’s really helped to clear stuff out of the way, which will, in turn make it easier to complete the remaining jobs we have to do out there. 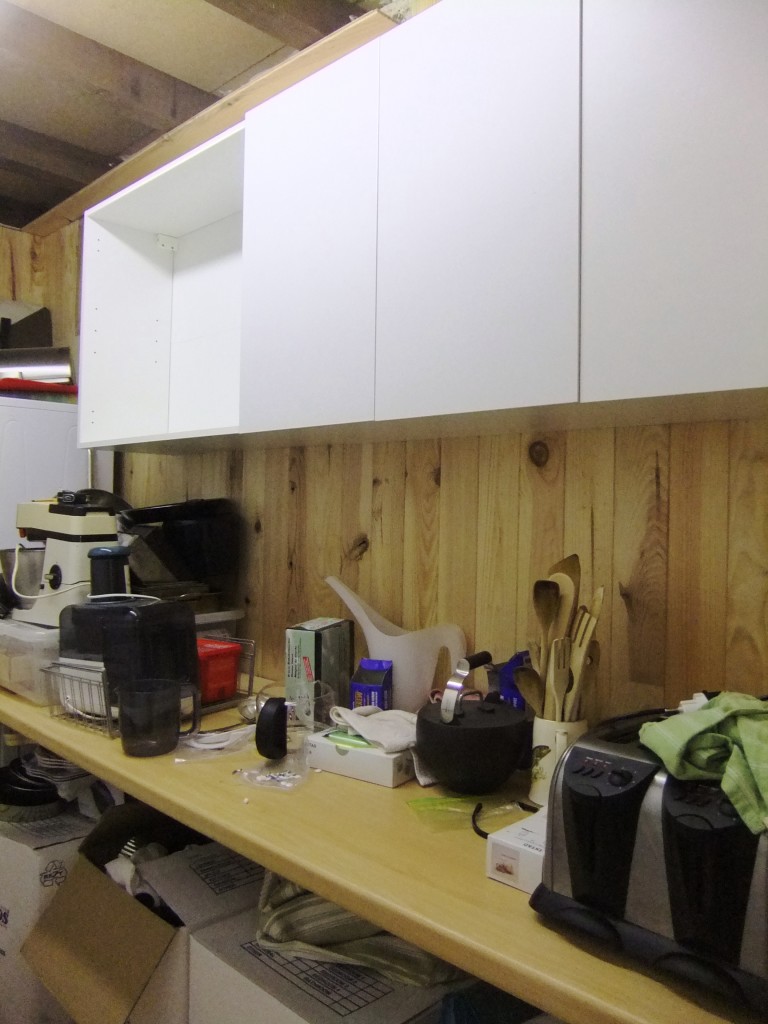 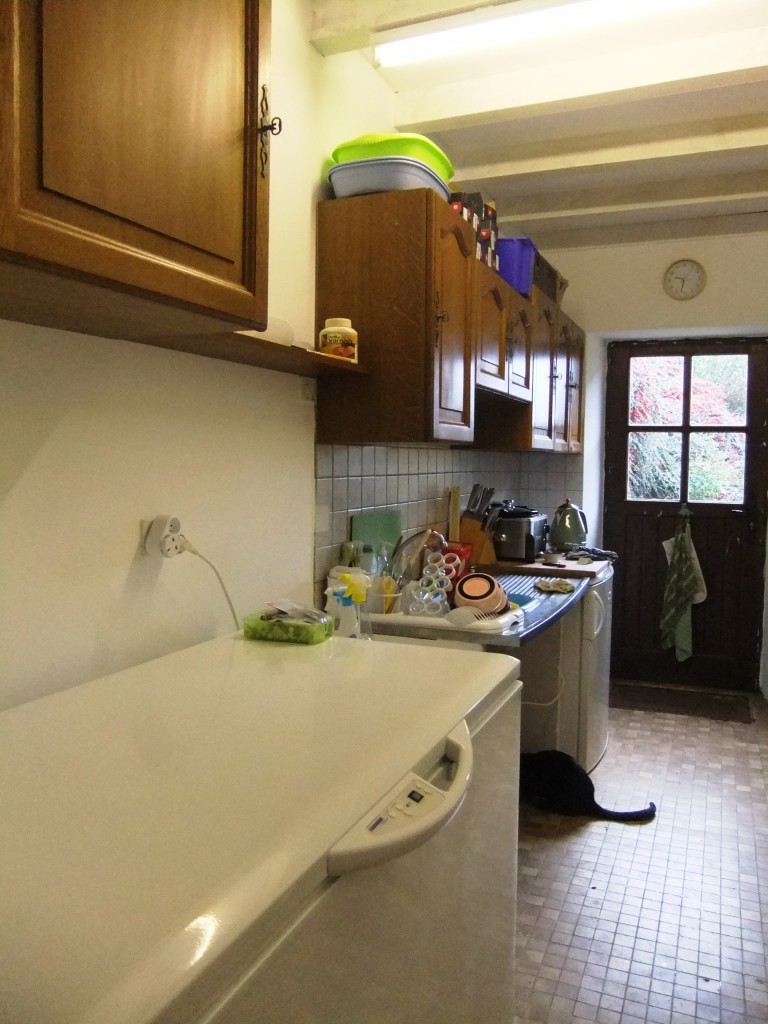 Eventually, everything will have a permanent home!

The plans for the main kitchen have had several iterations.  Initially, when we were planning the kitchen before we moved in, we’d priced up white units from Leroy Merlin.  They were the cheapest range available but would have been adequate.  However, as we became more adept at using ‘Le Bon Coin’ (French equivalent to ebay), we decided to purchase a second-hand kitchen from a French couple – at a fraction of the cost of the new one and which is actually better quality and more solid, even in its second-hand state.  The ‘fun’ bit has been planning how it will all fit together!  It’s taking shape quite nicely.  Choice of worktop has been an on-going discussion point.  With the white kitchen we were going to buy from LM, we’d planned to install a solid wood worktop but with the change to the second-hand kitchen, which has solid oak doors, we thought more wood would be too much.  A white worktop looked like it would be just the contrast we were looking for but trying to find one at a reasonable price and at the right length defeated us.  Instead, we have gone for a mottled effect top, which seems to go quite well with the wooden units.  Although darker than we’d originally planned, we think the light décor we have in mind and the size of the room will mean it will work well. 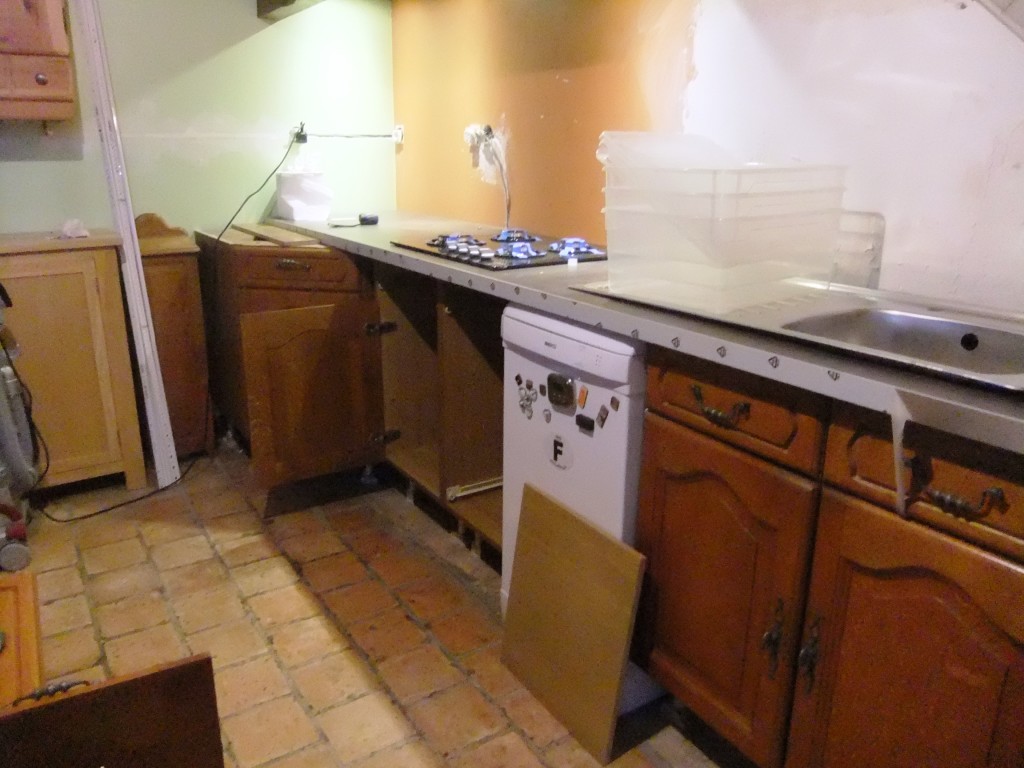 Edward has now fitted the gas (bottled) hob and the first thing to use it was our whistling kettle – our friend, Ruth Horner, will be proud of us!! 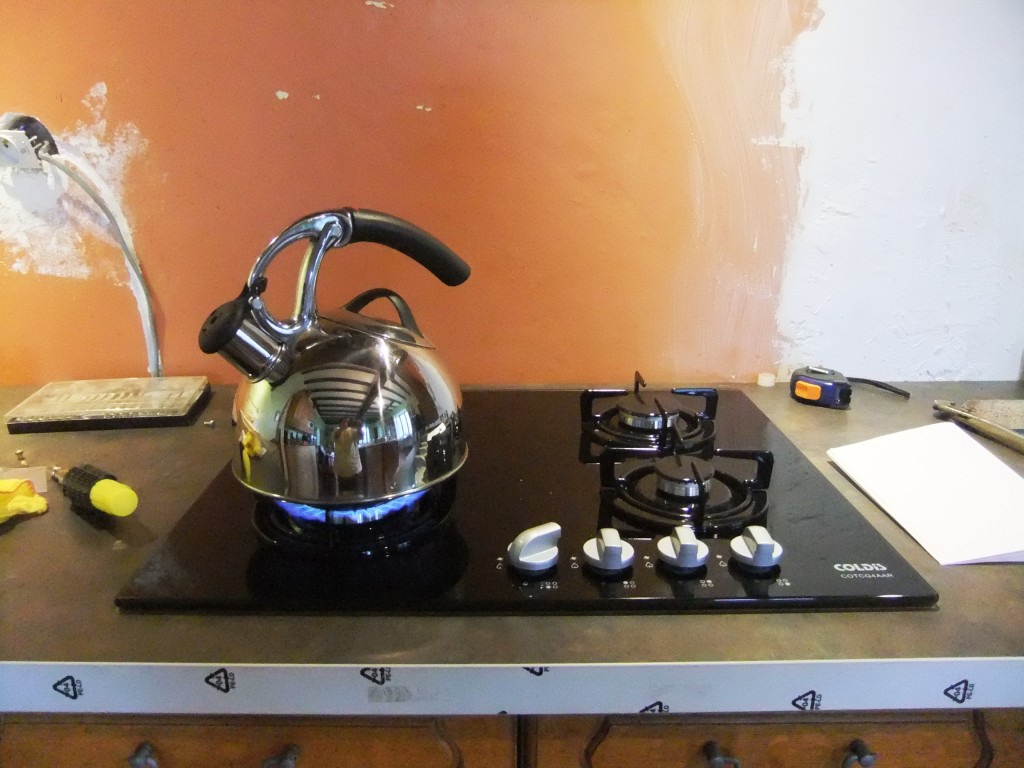 Over the last couple of days, Edward has concentrated on the kitchen island.  The units we bought were installed around the walls and so Edward has had to be inventive to make some of them work in an island.  I think he’s done a great job, using tongue and groove to finish the exposed backs of the cupboards…. 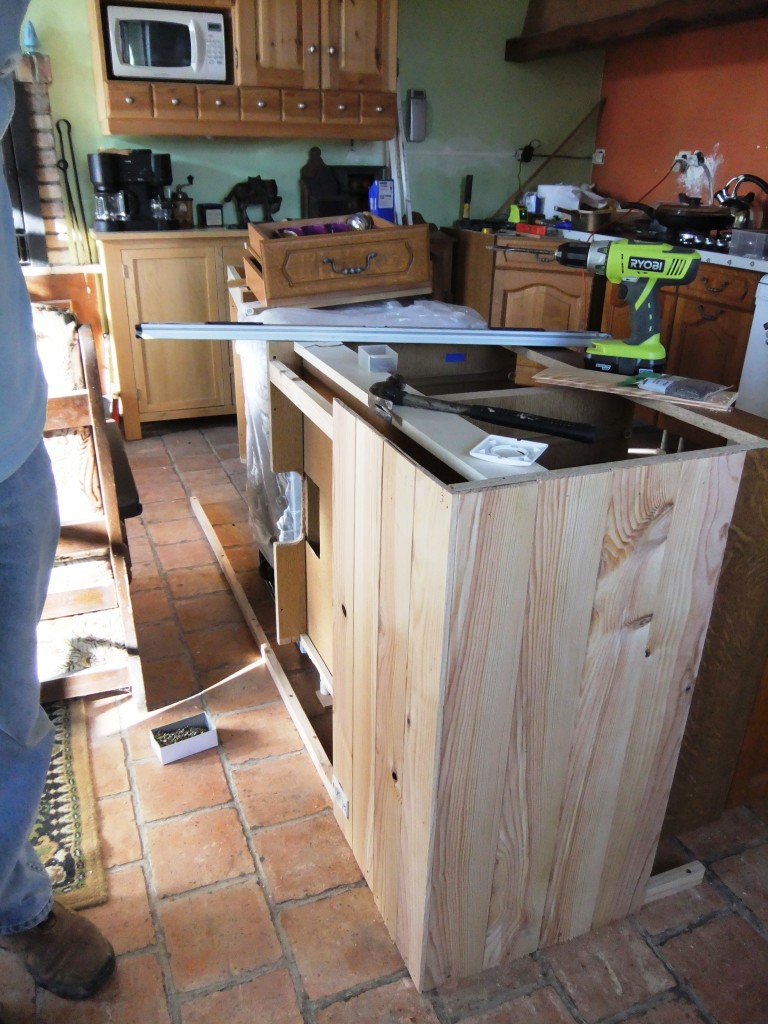 He’s installed plug sockets and when he brings the electricity supply to the island, there’ll be additional sockets in the worktop too.  At the other end of the island, he is making narrow shelves to take the mugs….

I’ve been saying for some time that the living room area doesn’t need that much more doing to it but it seems to have taken an age to get only so far!  I did spend half a day trying to sort out the fireplace though.  Each time we have used it and left the doors open, the room has filled with smoke so we stopped using it and invested in some chimney sweeping equipment – the other day, I gave it a go…. 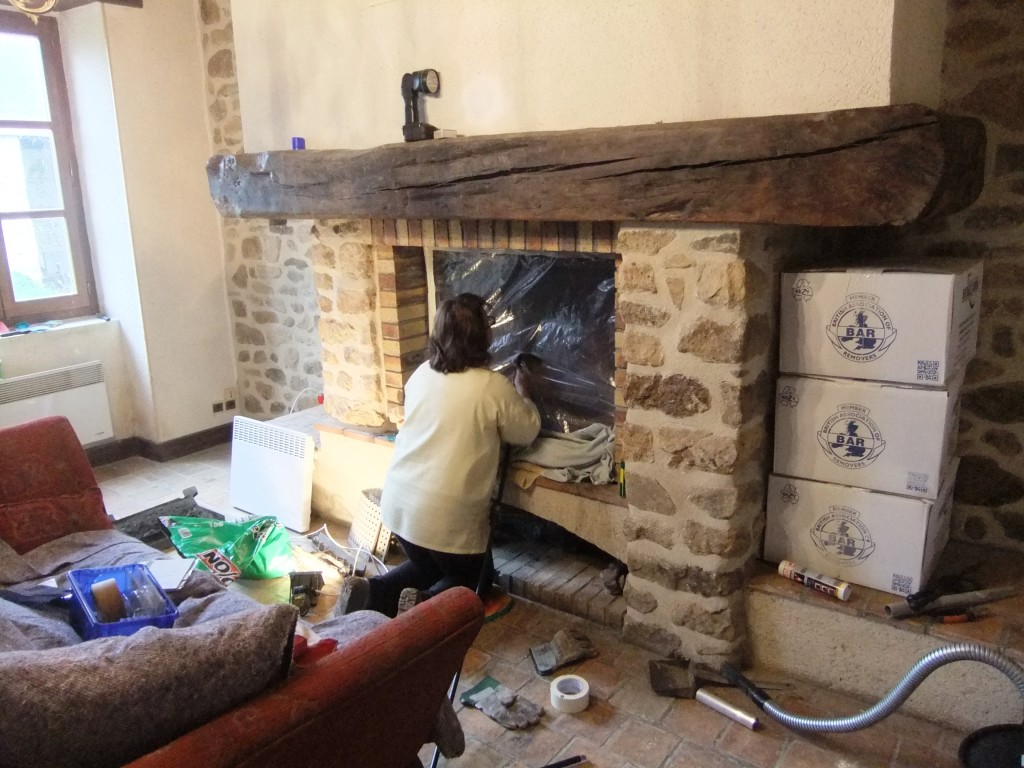 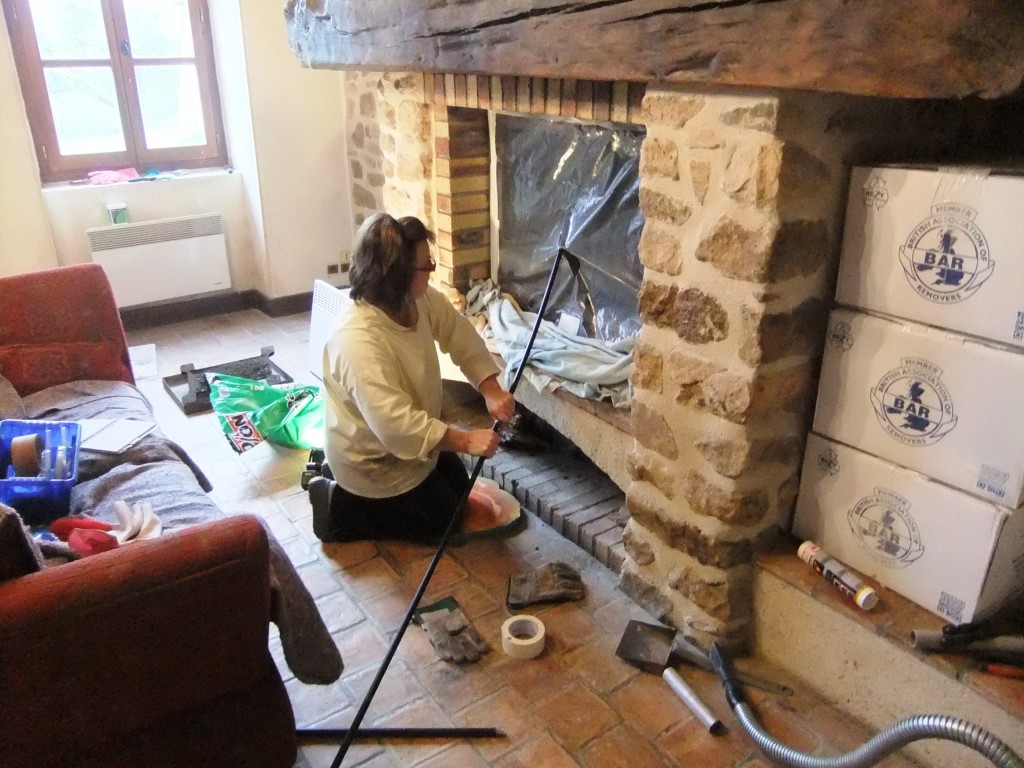 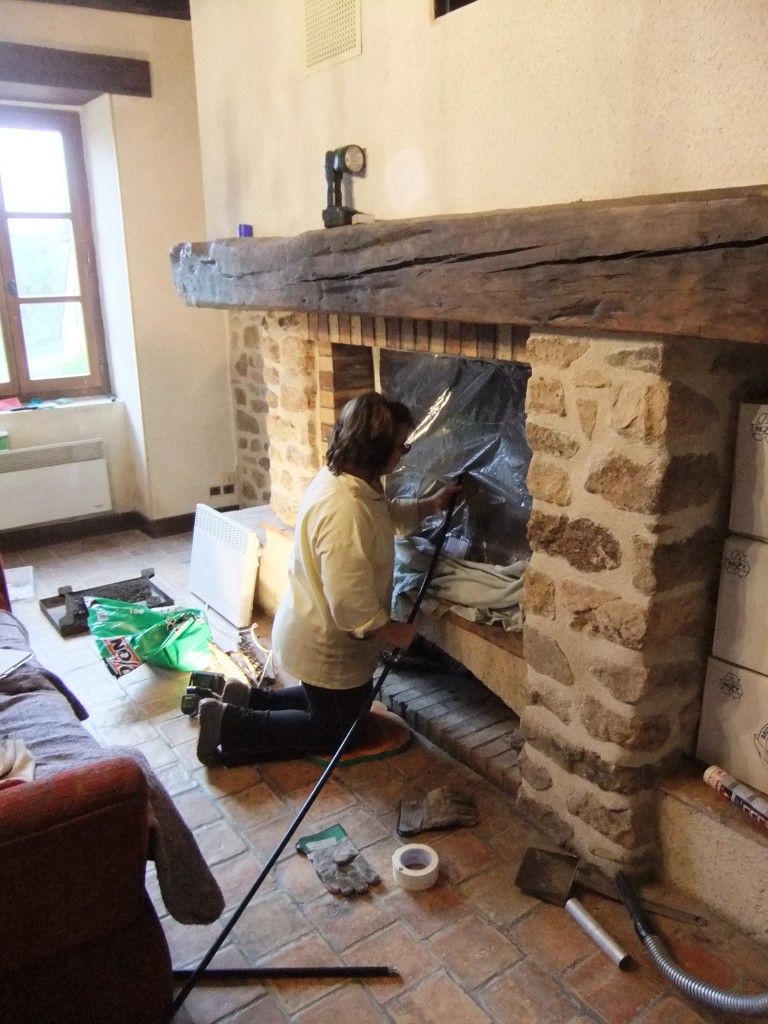 It took a lot of effort for, surprisingly, very little soot.  I never managed to get the brush out the chimney either but decided to stop when it looked like some of the chimney lining was coming off….. oops!

The other thing we tried was to remove the fire back, which was severely damaged and which may have been the cause of the smoke billowing into the room… 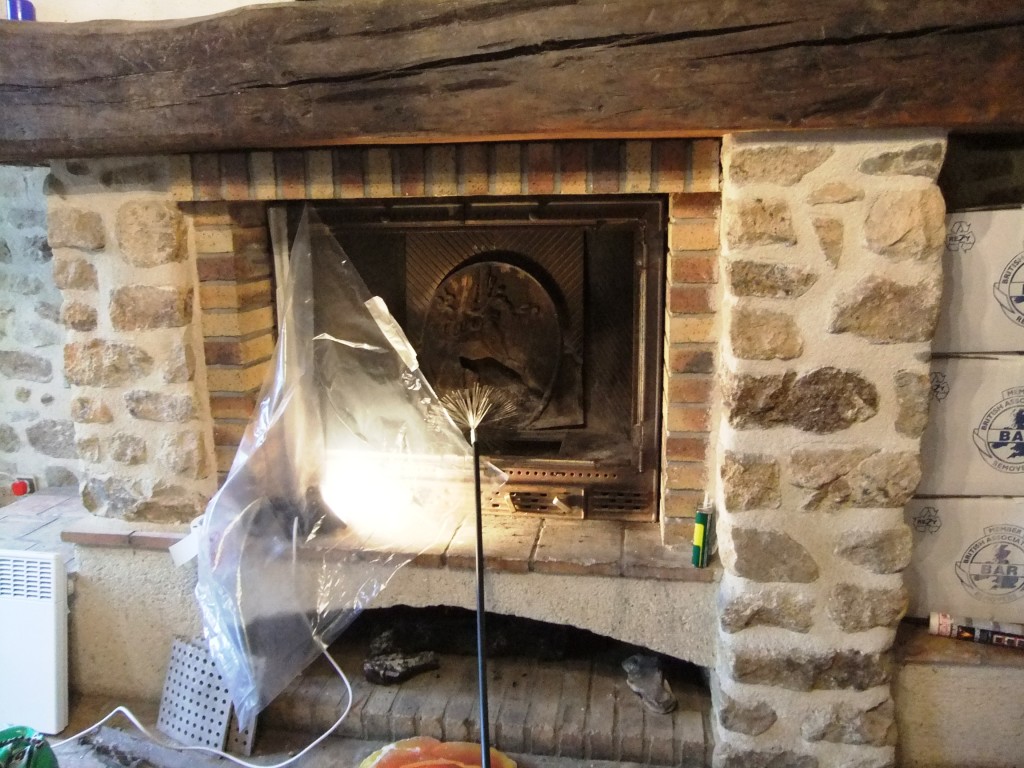 New fire rope around the glass doors and ash pan door should help to make it more efficient and a clean with some black lead, it will look good as new – I guess the proof will be in the pudding… hopefully next time we light it, we won’t get smoked out!!  I think we shall be looking for a fire back next time we visit the brocante at Fresnay 🙂

Since then, I finally finished painting the ceiling in this room.  It took some doing and was neck-aching work and as the old paint was so yellowed (probably from the fire), it needed two coats – darn it!!

So, it’s been back to painting the walls, the last stretch and the end is in sight for this room…. Easier said than done!  The walls in the living room and dining room have been applied with a type of sand-tex – they call it crépi out here.  It’s been up a few years by the look of it and it’s very crumbly, leaving fine, sandy dust over all the furniture.  We decided to apply new crépi to keep it in the same style but it’s not as easy as just painting it on.  Oh, no!  By trial and error I’ve found the best way is to scrape it onto the walls with a paint pad in one hand, while spraying the walls with water with the other hand.  Without the water, the walls soak up the crépi instantly and you’re left with an unmanageable mess. 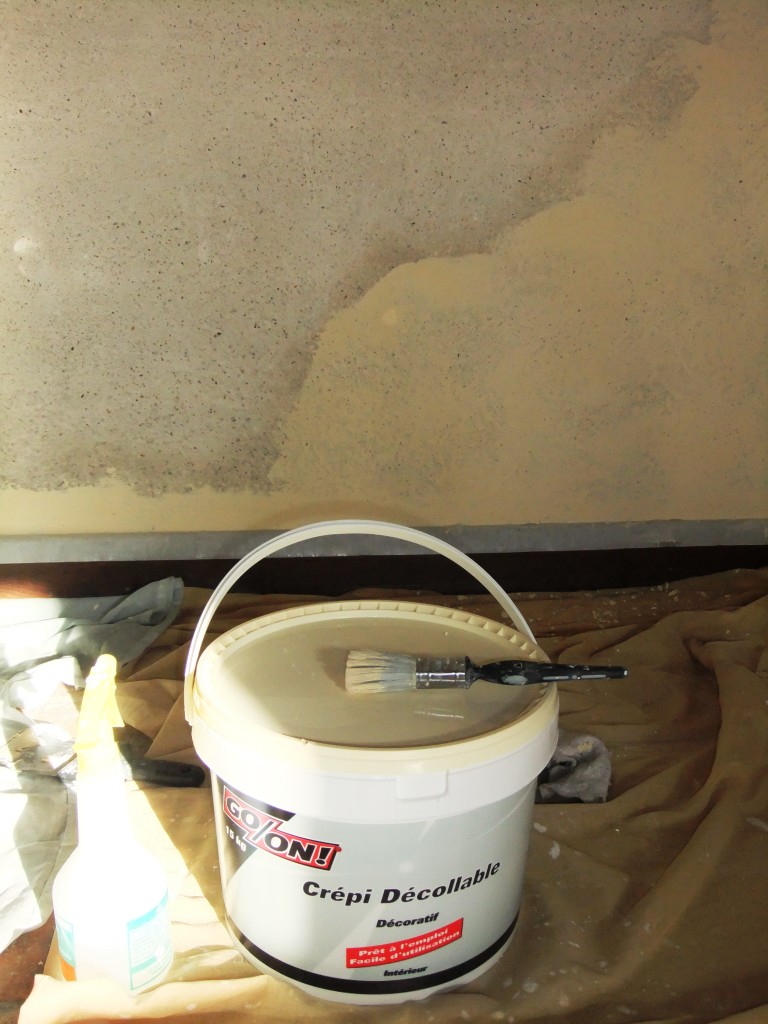 So, the last few walls are being covered – aren’t I glad that there are no other rooms that have this type of wall covering!! 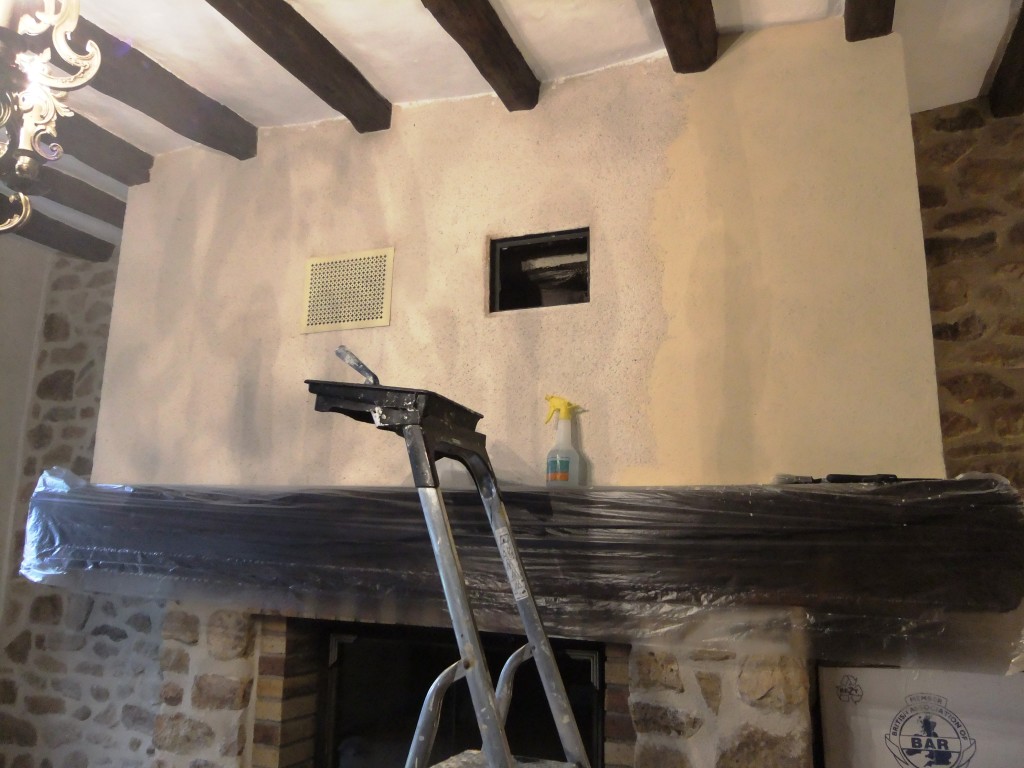 Annoyingly, I’ve just realised that while I only have one more wall left to do, I’m not going to have enough crépi to finish it!  Looks like we’re back to the Bricomarché tomorrow then!

In the meantime, I have discovered that teak oil works a treat on the oak mantelpiece, which had clearly seen better days.  It has really brought out the grain of the wood and it has given me the idea to use it on the other beams, which have been dried out in places by plaster dust, etc. 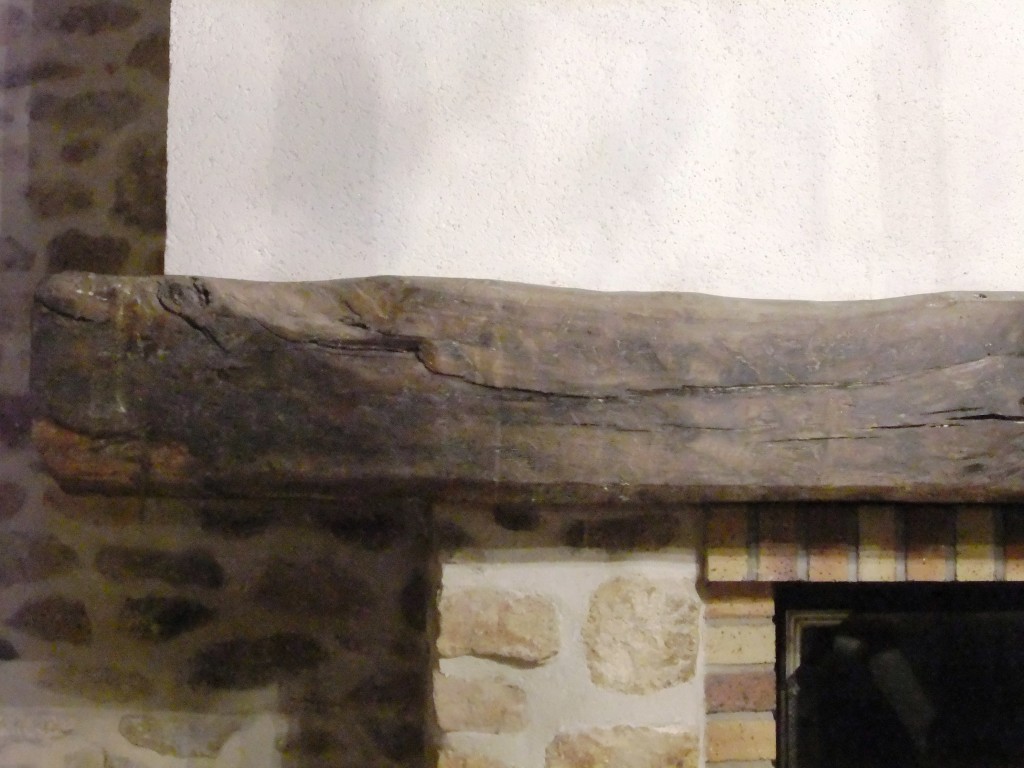 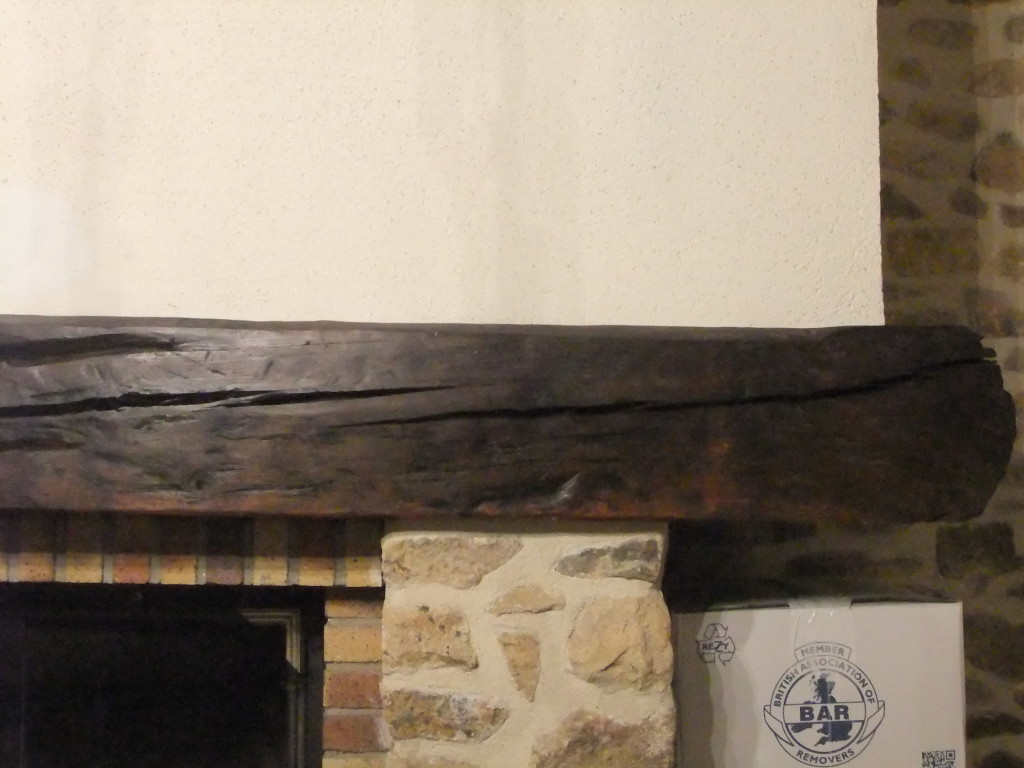 I have also found that linseed oil can be used on the tommettes (terracotta tiles) and a little experimental area shows that they will come up beautifully when treated – photos to follow when we get onto that job….

Sunday we had another load of fire wood delivered – it feels really good to have a good stack ready for winter, especially now that it has turned colder… 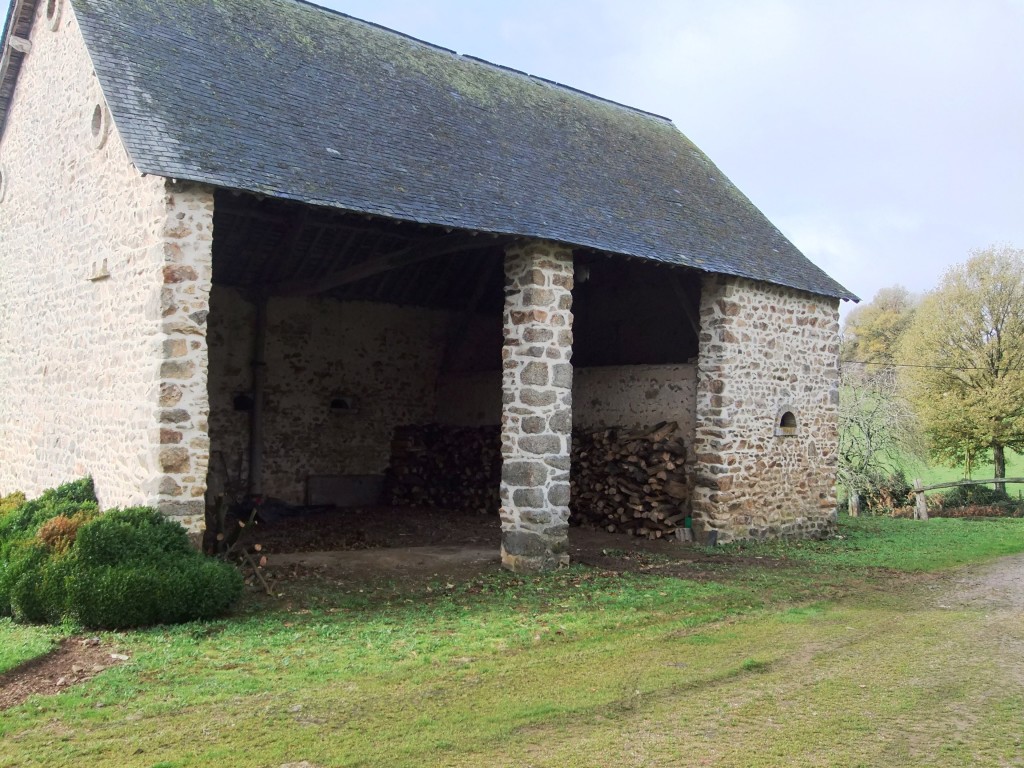 I couldn’t get a decent shot of Edward with his axe for love nor money – this one makes me think of Jack Nicholson in ‘The Shining’….. 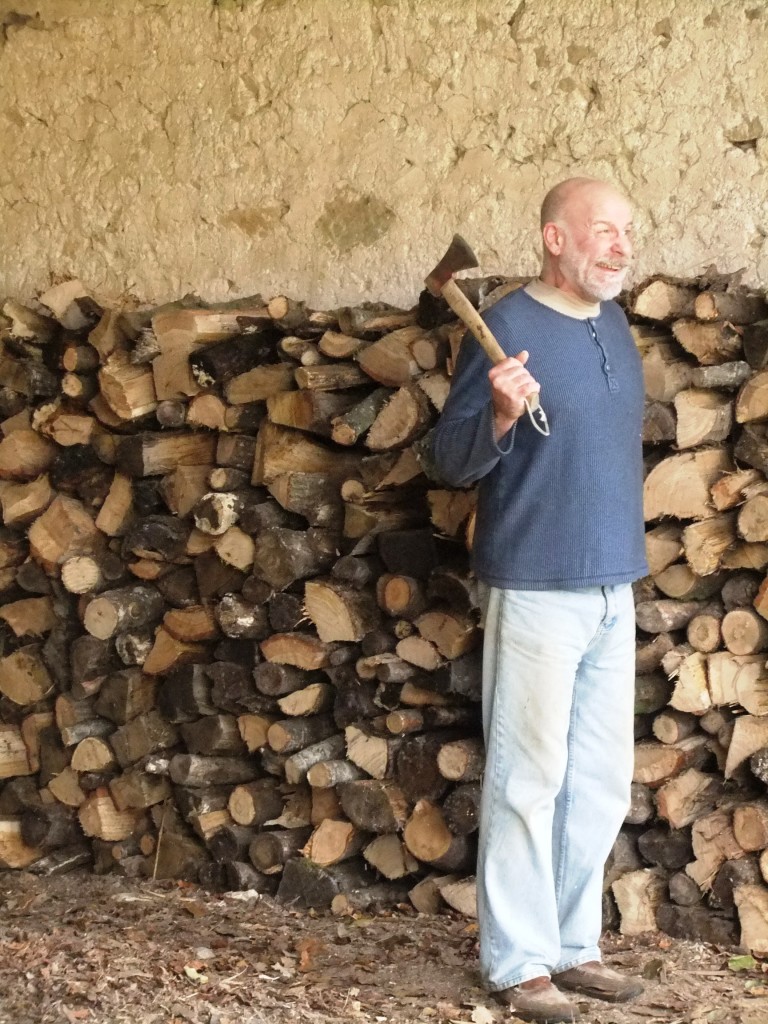 We’ve had our first frosts here at La Biochère and the last couple of days were beautiful…. 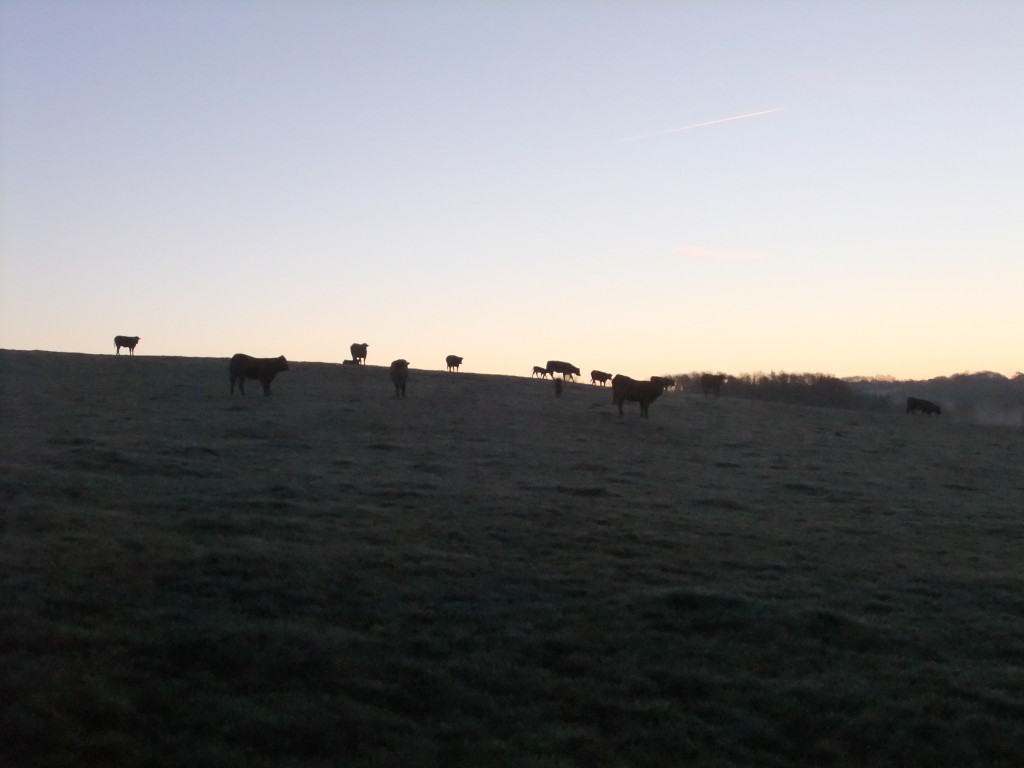 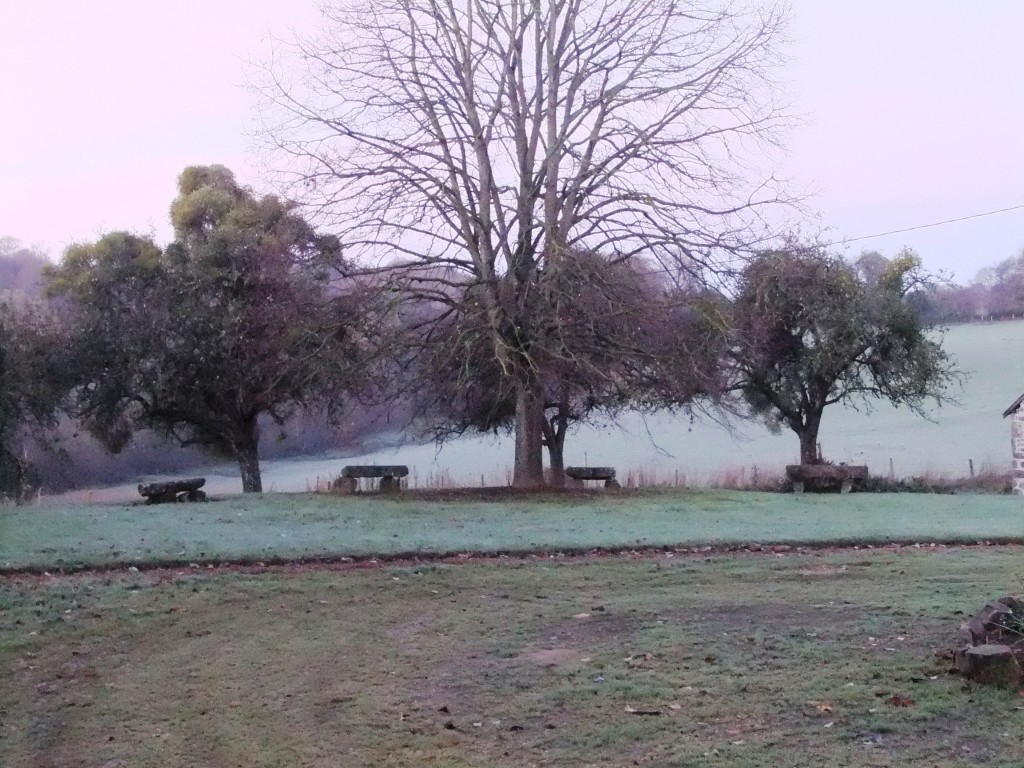 Such a relief from the wind and driving rain… 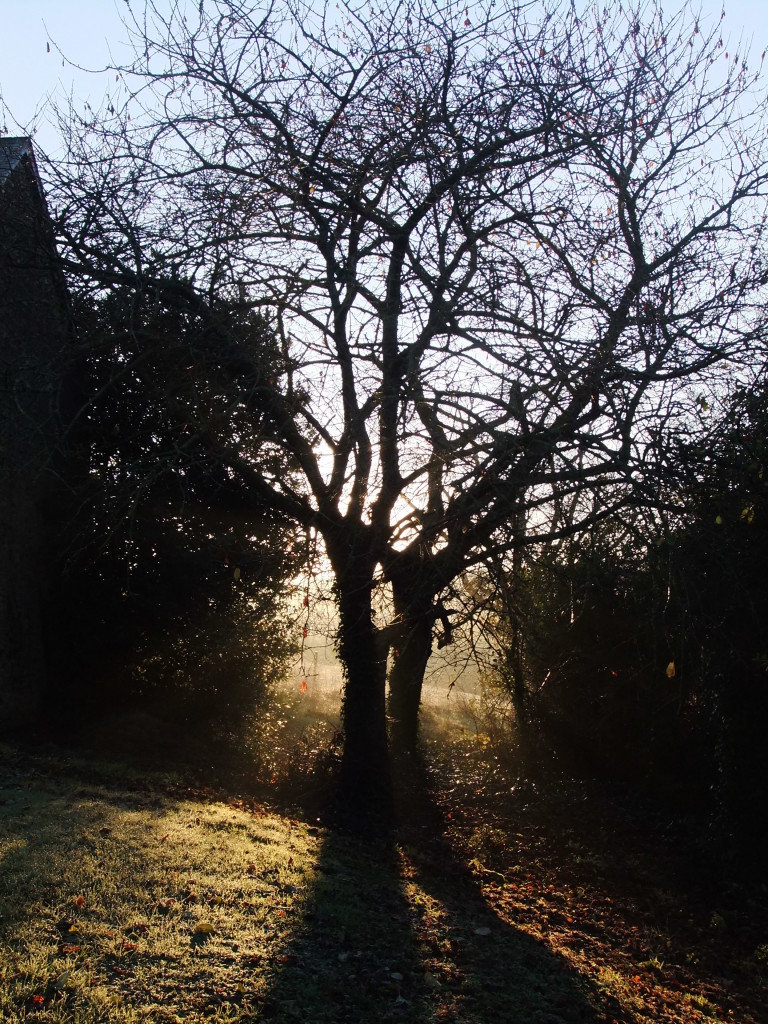 The last few leaves on the cherry tree are clinging on… 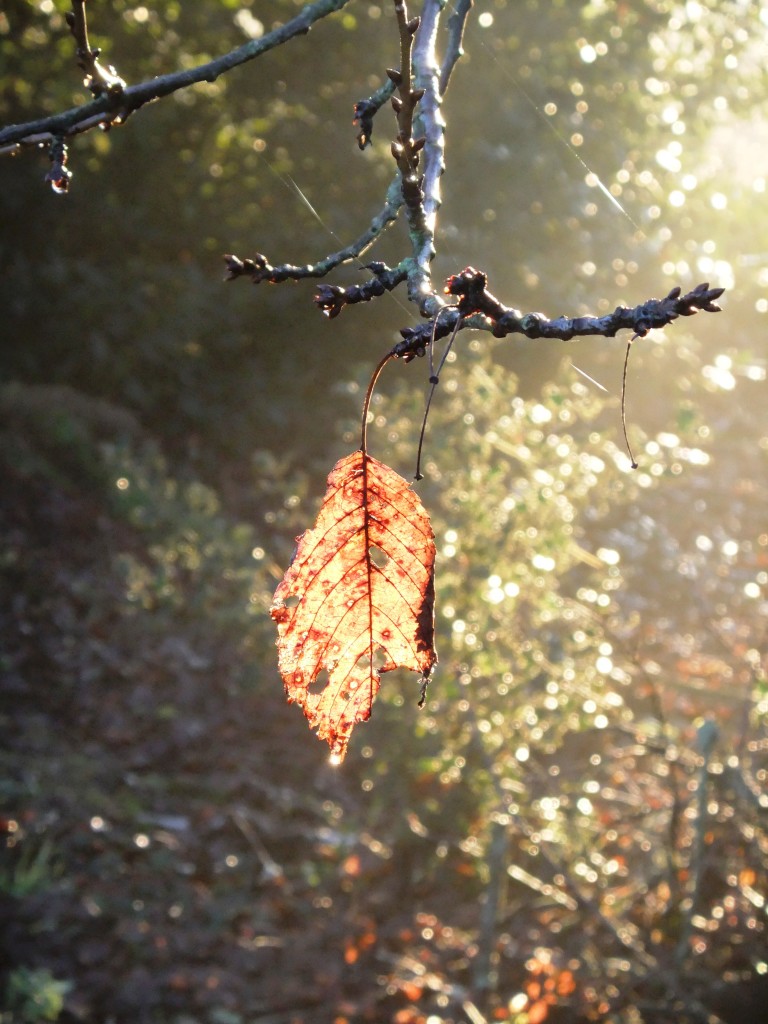 While those that have fallen lay frosted on the ground below… 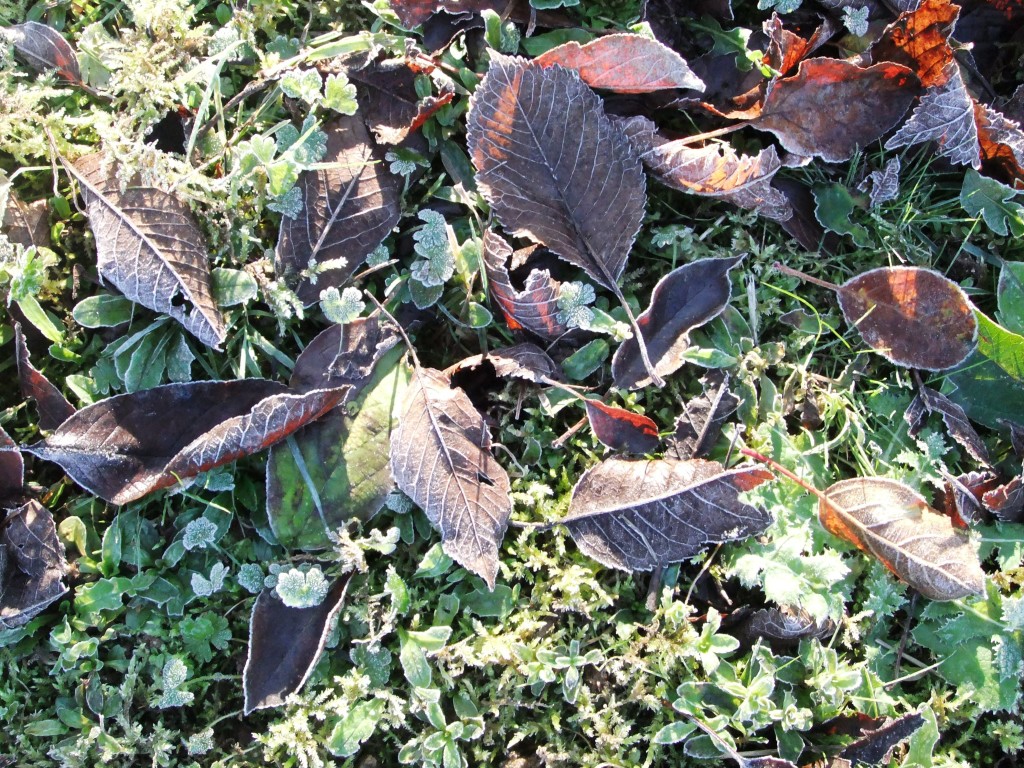 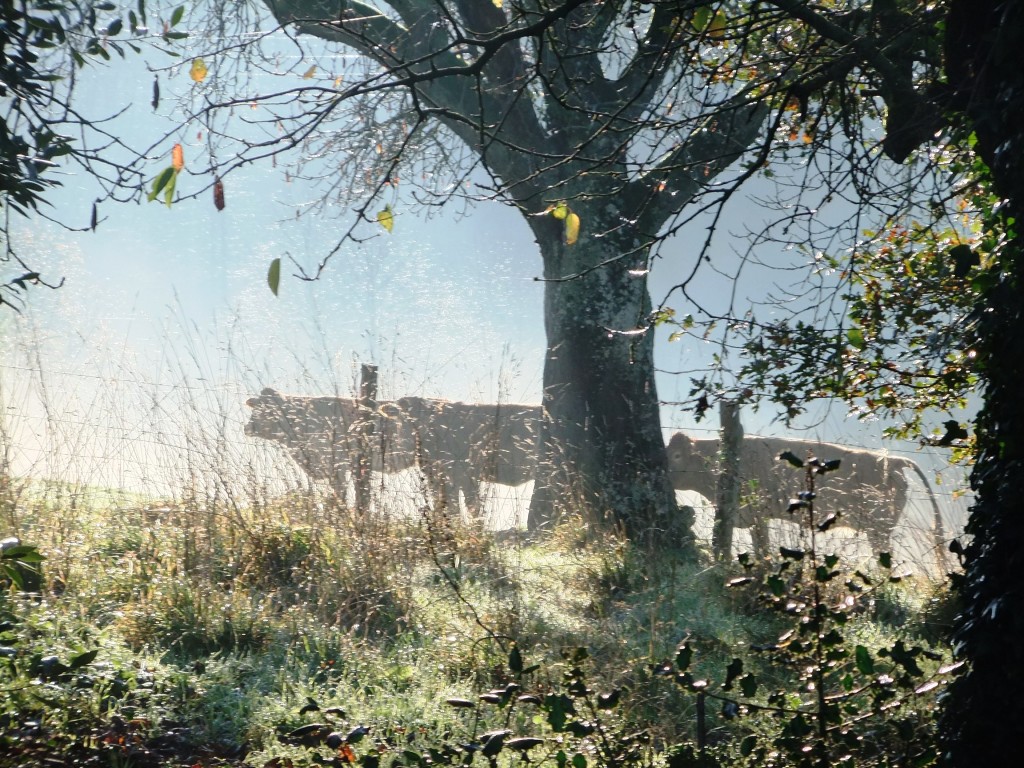 Colin and Mouse are having a great time of it! 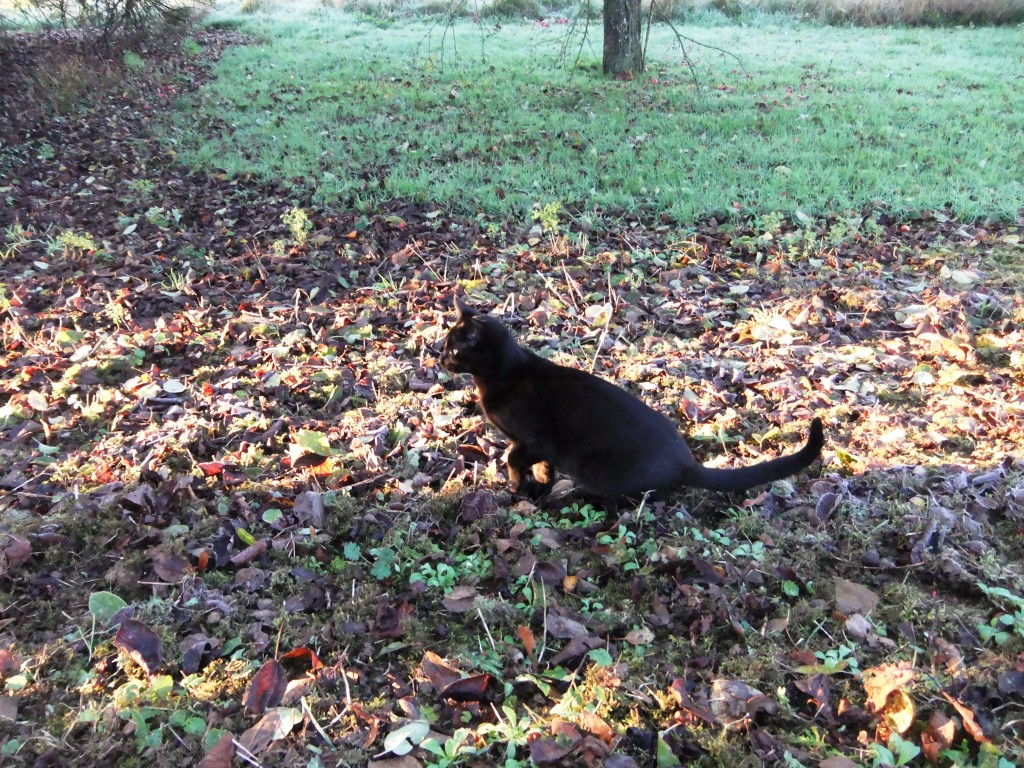 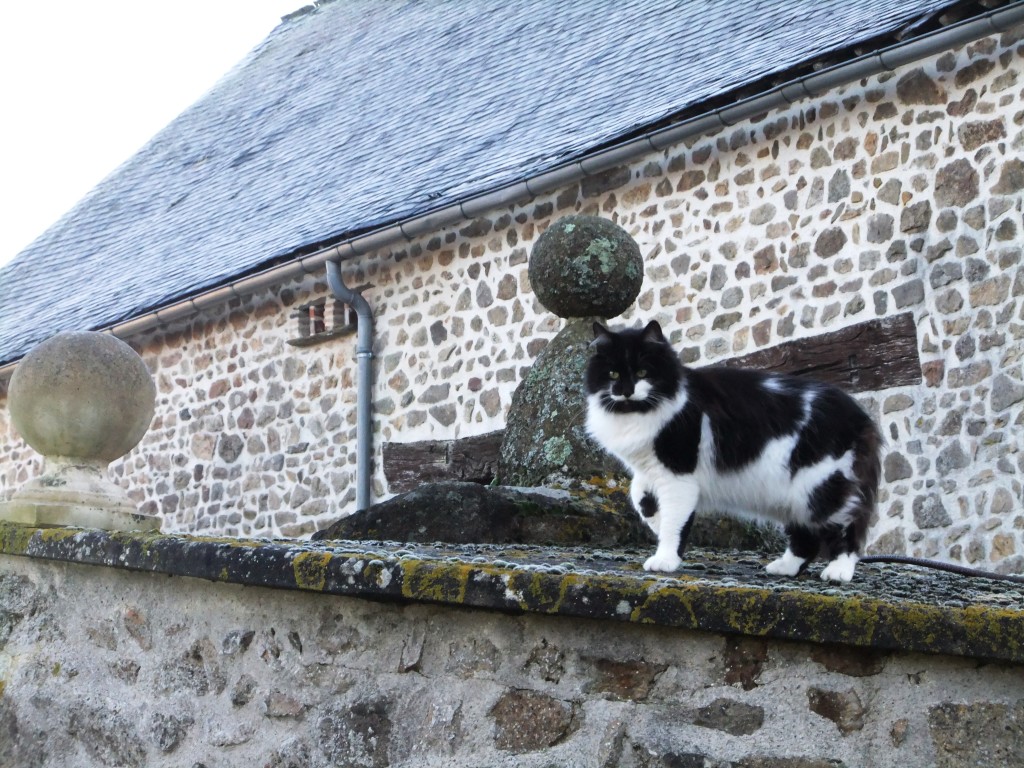 While Jim prefers the relative comfort of the kitchen sofa!  I guess at 19 years, he can decide what he wants… He doesn’t do too badly, considering he has a dicky heart and renal failure.  The pills seem to be helping but every now and then his eyesight seems to go – doesn’t stop him though – I let him out last night as it seemed that was what he wanted, despite the cold.  I watched him from the window, turning to talk to Colin who had just come in.  When I looked back at Jim, he’d gone, just disappeared!  I called Edward to help look for him – it was dark, except for the moonlight and we couldn’t find the torch.  A few worrying moments later and he suddenly appeared from the large barn, totally unaware of the concern he’d caused!  Phew, thought we’d lost him! ♥ 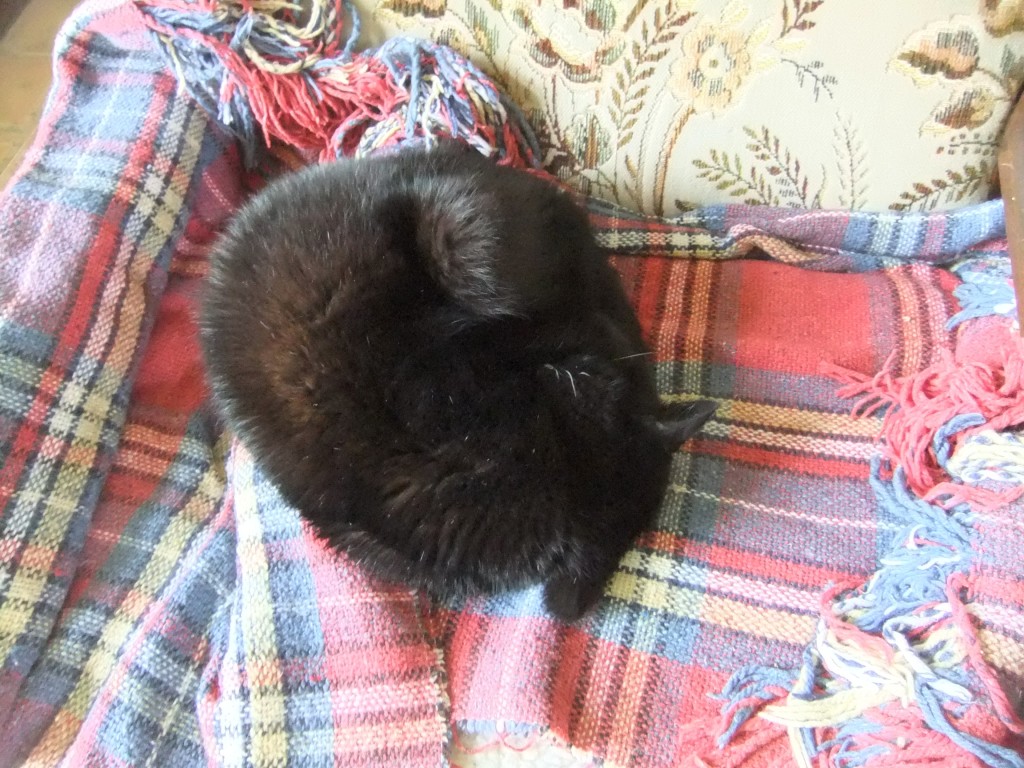