We had a day out with Julie’s parents on Thursday 21st April with Julie’s mum and dad and which everyone agreed was a good day. We began by visiting Evron where the market is held each week on a Thursday. Perhaps the crabs, chickens, ducks, quail, geese and other live animals for sale did not agree so much that it was a good day. 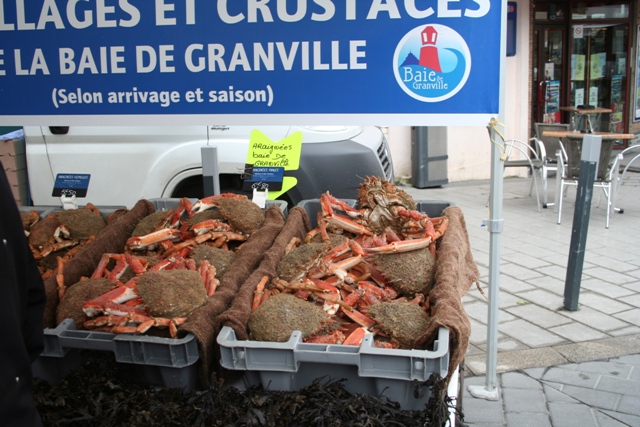 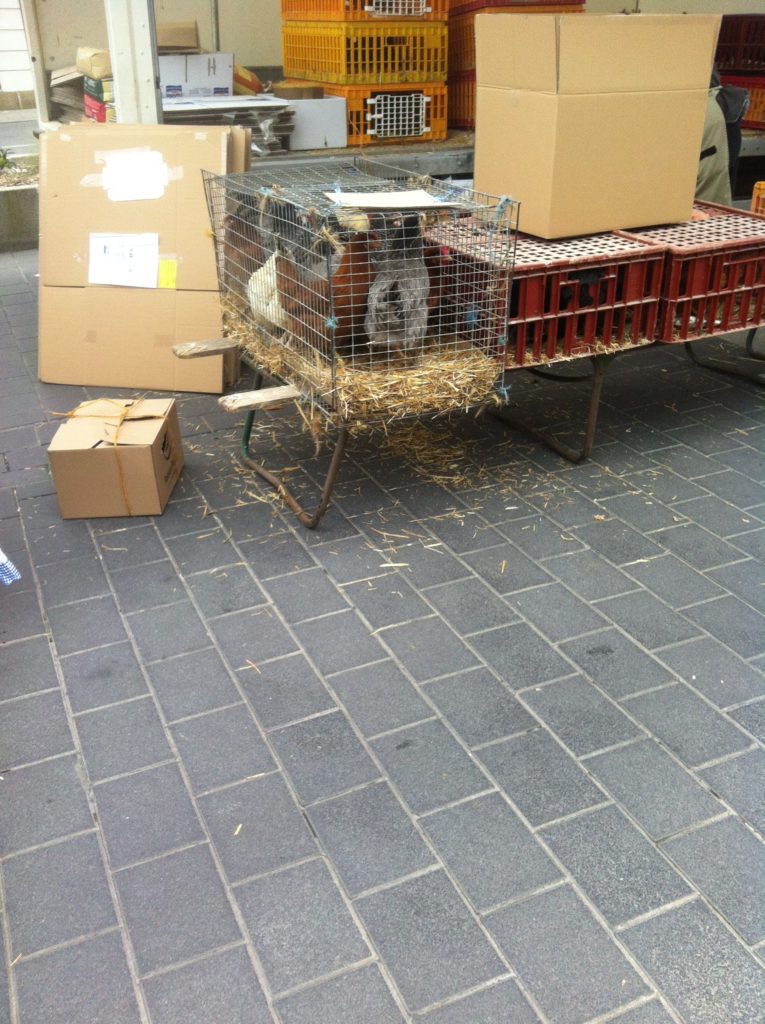 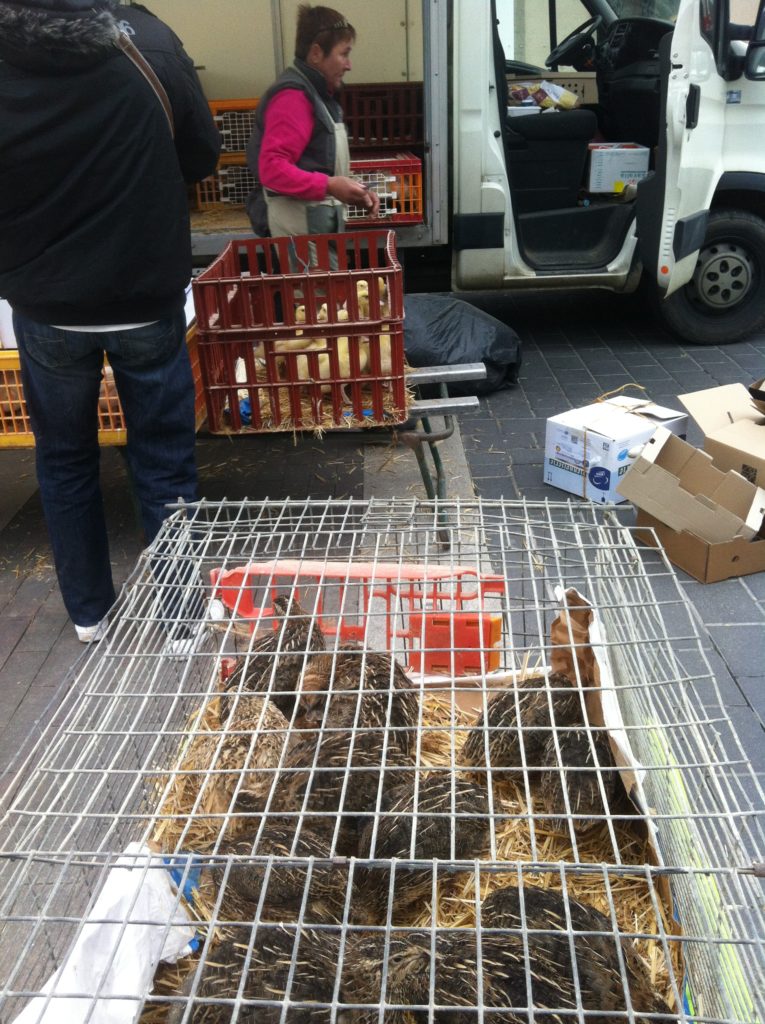 We had sausage sandwiches or sausage gallettes from the stall selling them and after we had had a good look around moved on to visit the Roman ruins at Jublains. Julie and I have visited the museum before and loved it so we hoped Wendy and Albert would too. It was getting late in the morning so we went to see the Roman theatre and baths first. These are not a part of the museum and are free to view. Whilst the rest walked to the theatre I made my way to the restaurant in the village to reserve a table. The theatre must have been a great place for the Romans to go to be entertained situated on a hillside as it is. We enjoyed a walk around there reading about its history. 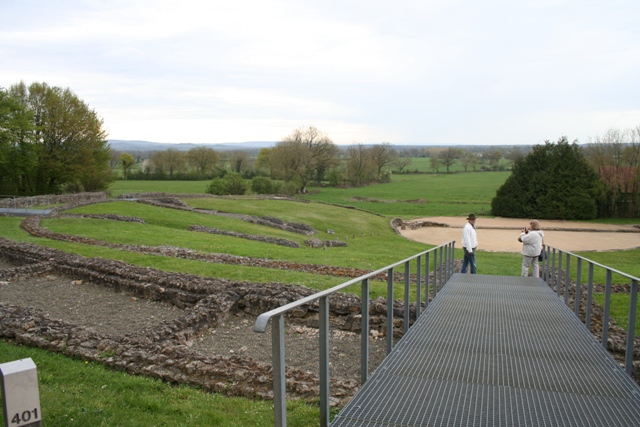 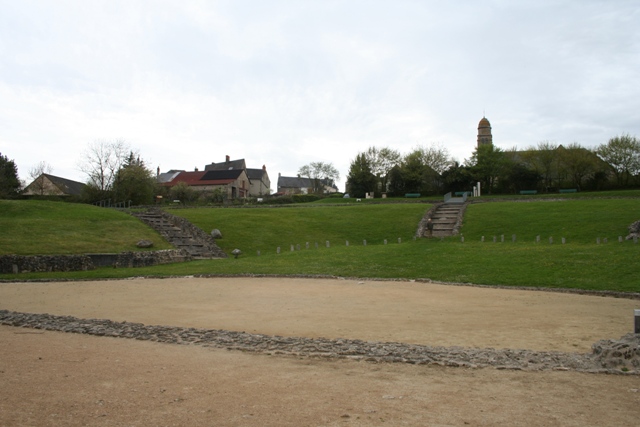 The baths were used as foundations for the church years ago and have been excavated inside the church itself. When we went into the church to take a look we found a party of French school children in there taking up most of the room in the viewing gallery. We saw what we could of the baths and made our way back outside. We decided to have a drink and went to the restaurant for coffee and tea. I can recommend a milky coffee in there, its the best I’ve had. Julie’s mum said the tea was good too.

Afterwards we drove up to the museum just a few hundred yards feeling refreshed. We saw three coaches parked up and guessed there were more French students around. There were, so we tried to go where they weren’t. We walked around the fortress first. Albert, like me, likes to read all about what he is seeing. I think he found it interesting. When the school children came outside we went in side to see the more fragile exhibits. It was very enjoyable and it was only towards the end that another group of children came in and disturbed our tranquility in their hunger for knowledge.

We were getting hungry too so we adjourned to the restaurant for lunch. We did it French style too, taking ages over our lunch and finishing with another coffee. I have to go back there soon, I love their coffee.

And so back to the museum to view a film in English that the museum staff put on for us and to finish our tour around the exhibits.

The last part of the Roman town experience in Jublains is the temple. It is just at the outskirts of the modern village and takes up quite a space. We enjoyed a tour around it and also saw some spring orchids. 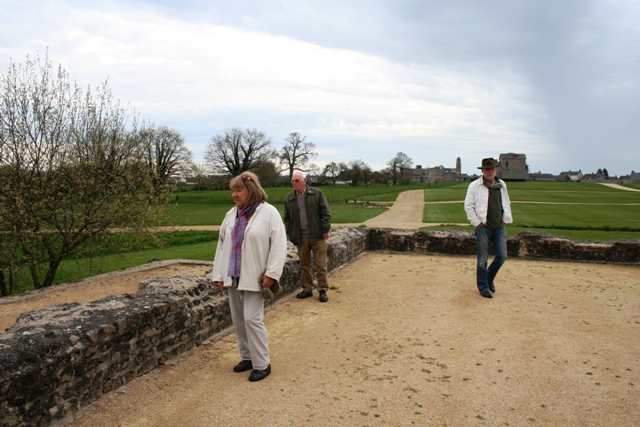 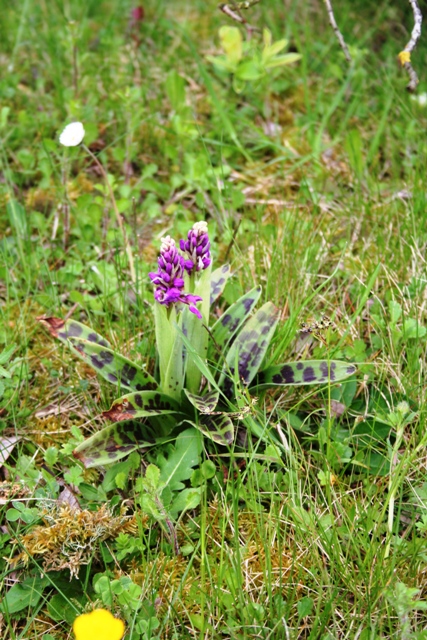 After Jublains we had a drive to Villaines la Juhel to show our visitors our nearest sizeable town. We stopped and had a walk around again. From there we had a drive to one of my favourite local places, St Thomas de Courceriers. Its on the way home from Villaines and just outside of the village I think it is so picturesque I just love to walk along the road and enjoy the scenery. Happily Julie’s parents enjoyed it too. We saw beautiful farm buildings and a working water wheel. The stream gurgled alongside the road and the spring flowers looked gorgeous. It was a good end to our excursion. Five minutes later we were home and the kettle was on for a cup of tea. 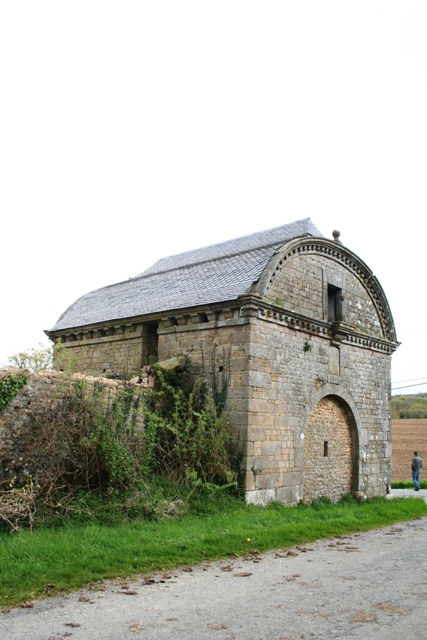 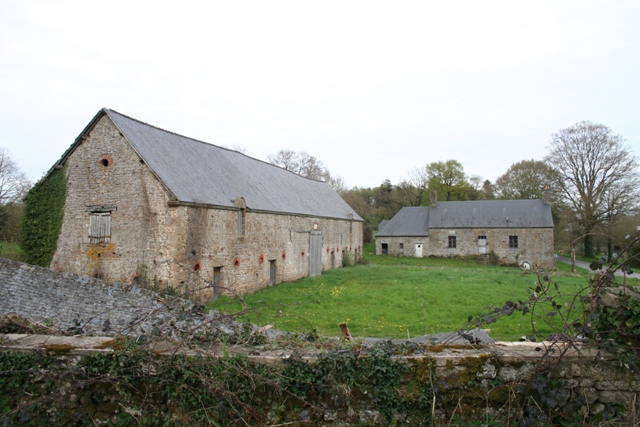 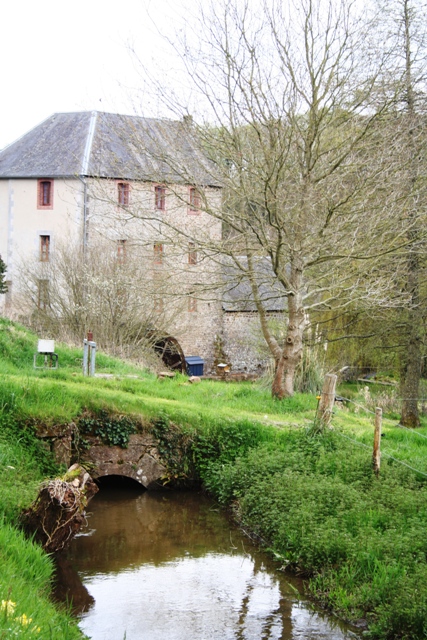 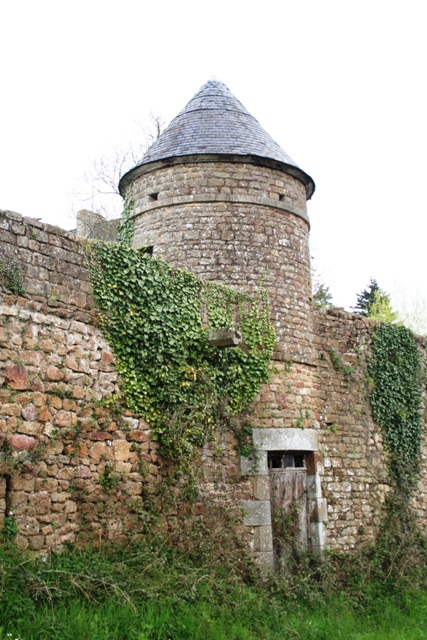 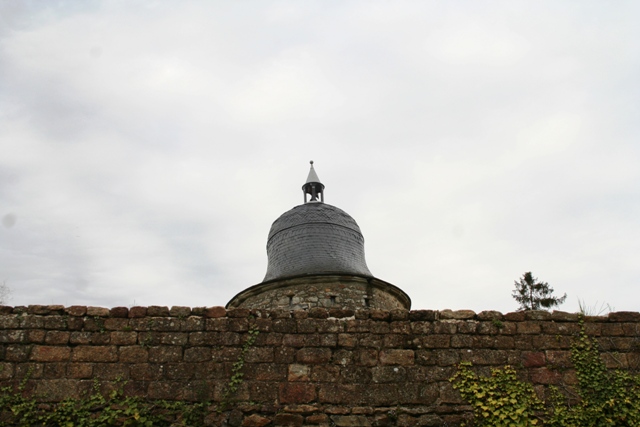 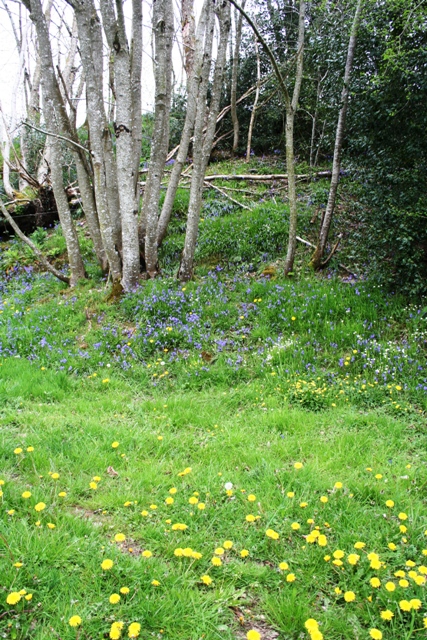 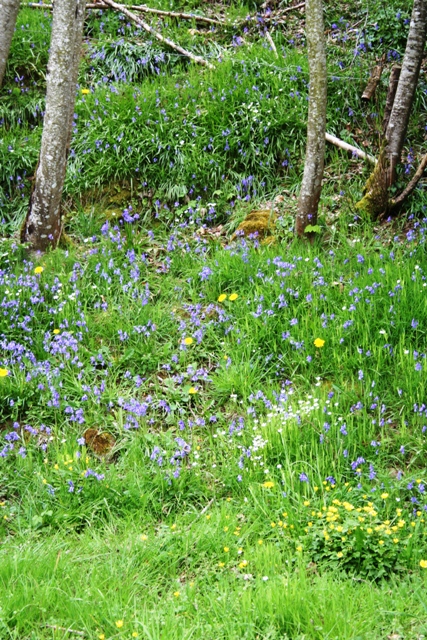 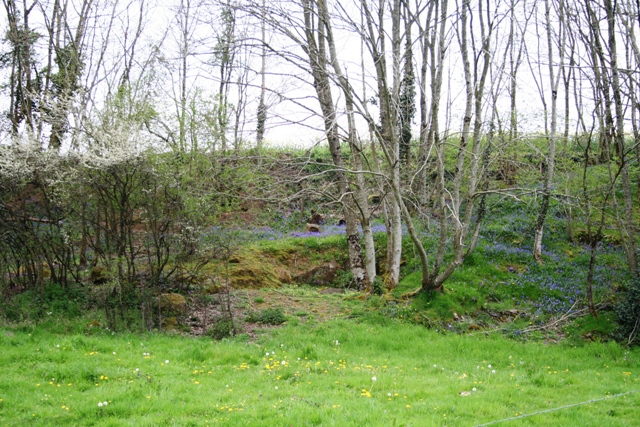 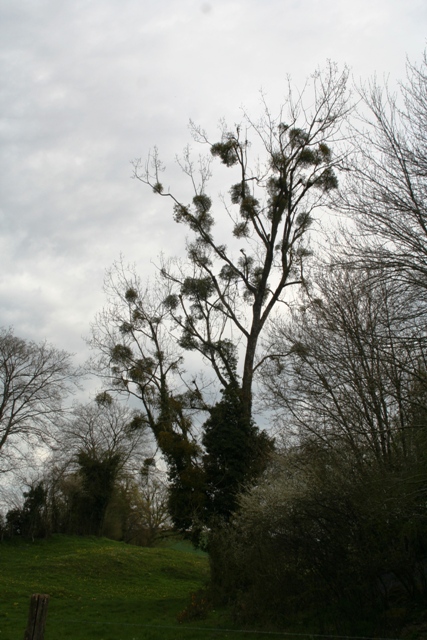 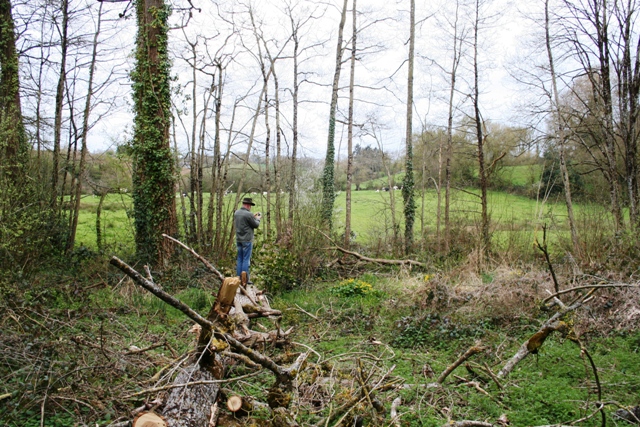 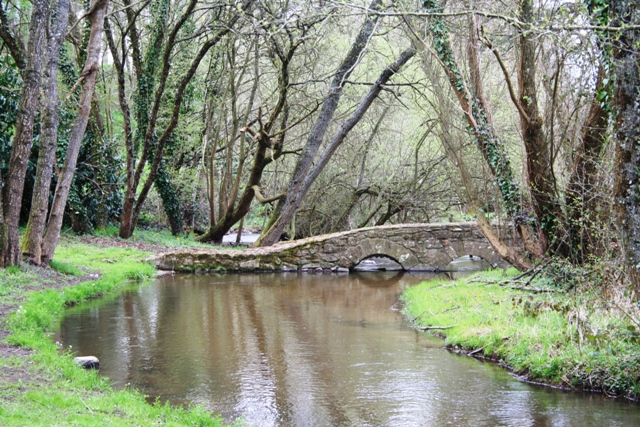