Journey from the cottage to the house

Wednesday morning and we were up early preparing to leave the cottage.  A last chance to catch up on emails, etc. as we would be without internet initially at the house, then on with packing up the last few things  – amazing how much room it all needed  in the car!  We were just able to squeeze everything in, along with the cats – Colin and Mouse in the crate, with Jim on Ed’s lap….

We were finally ready to go, said goodbye to our neighbour, Steve and settled up with Charles by 10.30 am – later than we had anticipated but better late than never!  We’d planned to stop in Mayenne on the way over to sort out the telephone and internet connection with Orange, but as we were so loaded up and with the cat situation not being ideal, we decided to go straight over and come back to Mayenne later.

As it turned out, it was a good idea… Just outside St Simeon, we decided Jim would be better off in the crate with the other two, so stopped to sort him out.  The door of the crate was jammed against the edge of the car boot, which made it difficult to open but we got him in without any mis-hap.  However, about 20 minutes away from the house, movement in the back of the car caught my eye ‘There’s a cat out in the back’ I said to Ed.  ‘How’ve they done that?’ he replied – we were both amazed that they had managed to prize open the jammed door, until we realised it was Colin – Houdini strikes again!! 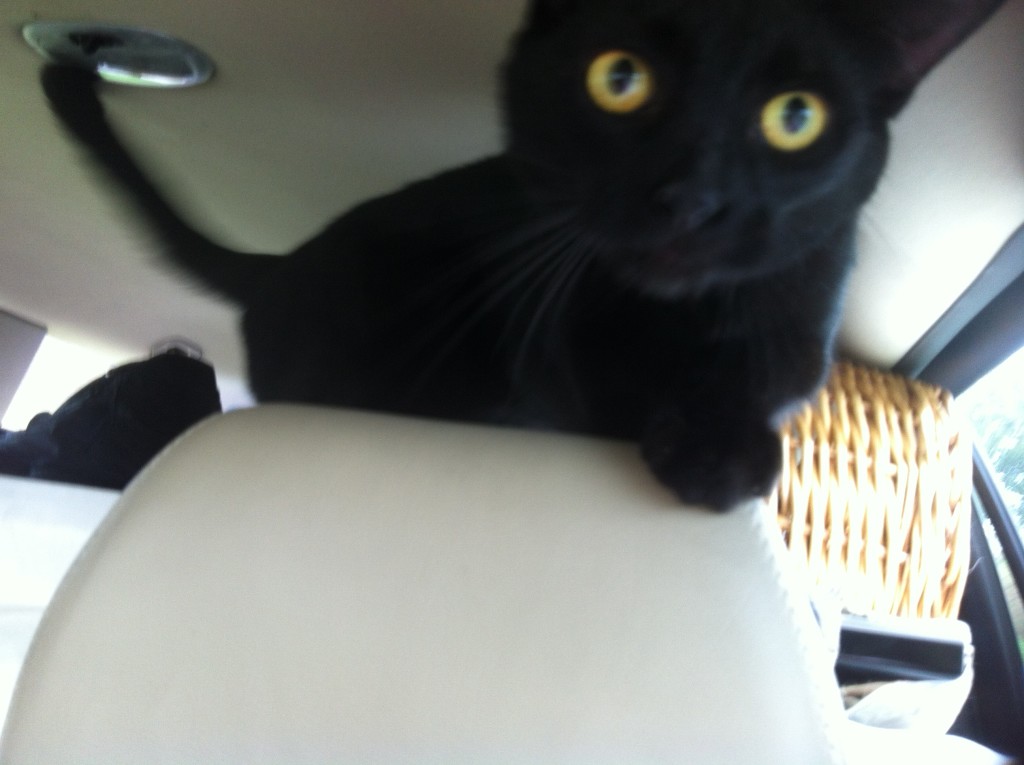 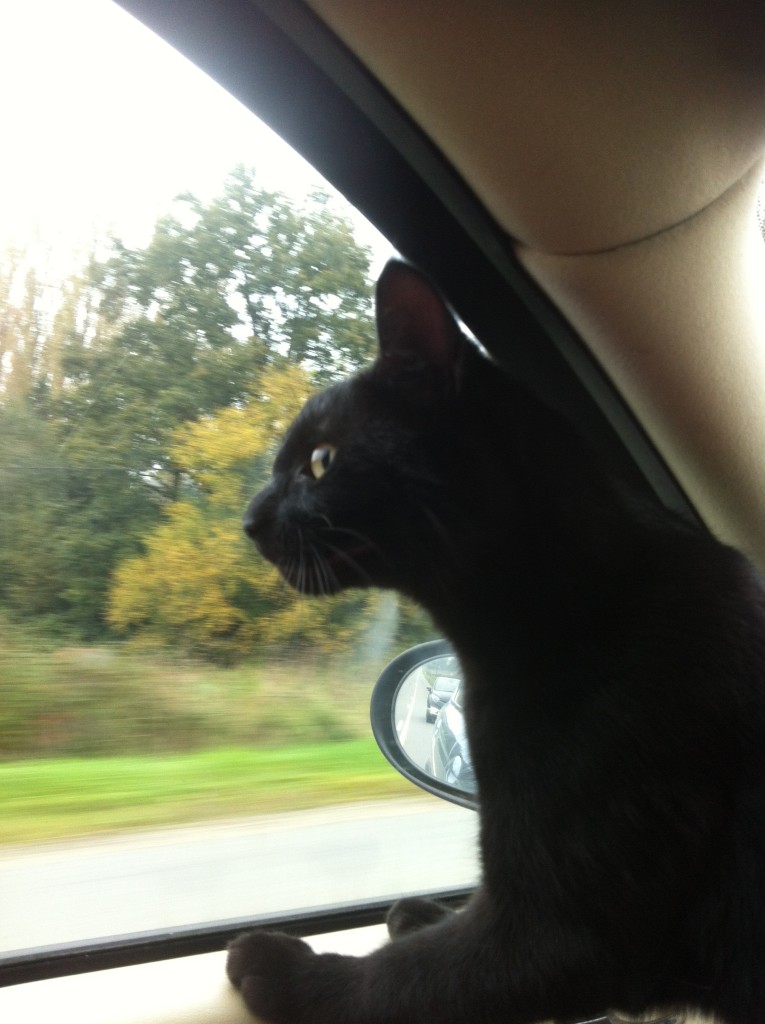 We should really have stopped but were anxious to get to the house without further mishap and Colin just wanted to see what was going on, while the other two stayed in the crate.  About 5 minutes away from the house, a terrible stench practically overwhelmed us – poor Mouse had had an ‘accident’ in the crate – OMG – the joy of travelling with animals….

What a relief to finally get there!

First things first and we sorted out the cats – food, water, bedding – they seemed quite interested in their new surroundings and it wasn’t long before Mouse and Colin were racing around the house and up and down the long hallway!  Jim soon found the food and litter trays – not bad for an old guy.

Ed and I spent some time sorting out the bedrooms then headed back to Mayenne to sort out the phone/internet and do some quick shopping, before making our way over to Bais to meet Lauren, the estate agent, ahead of the rendezvous with the Notaire. 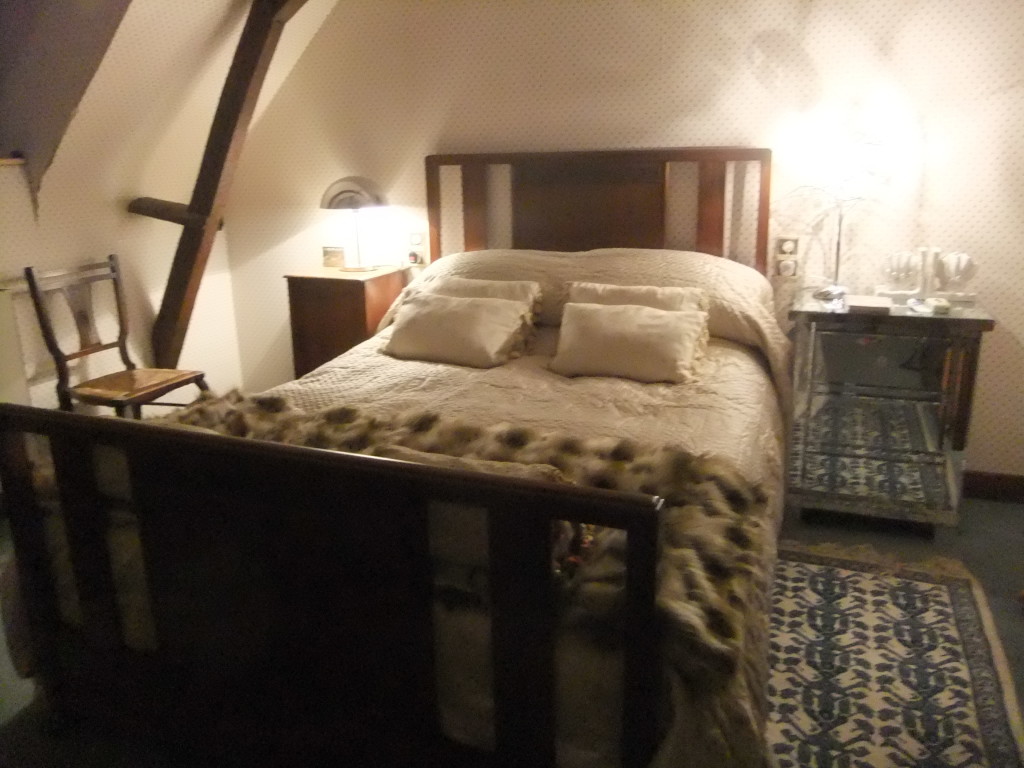 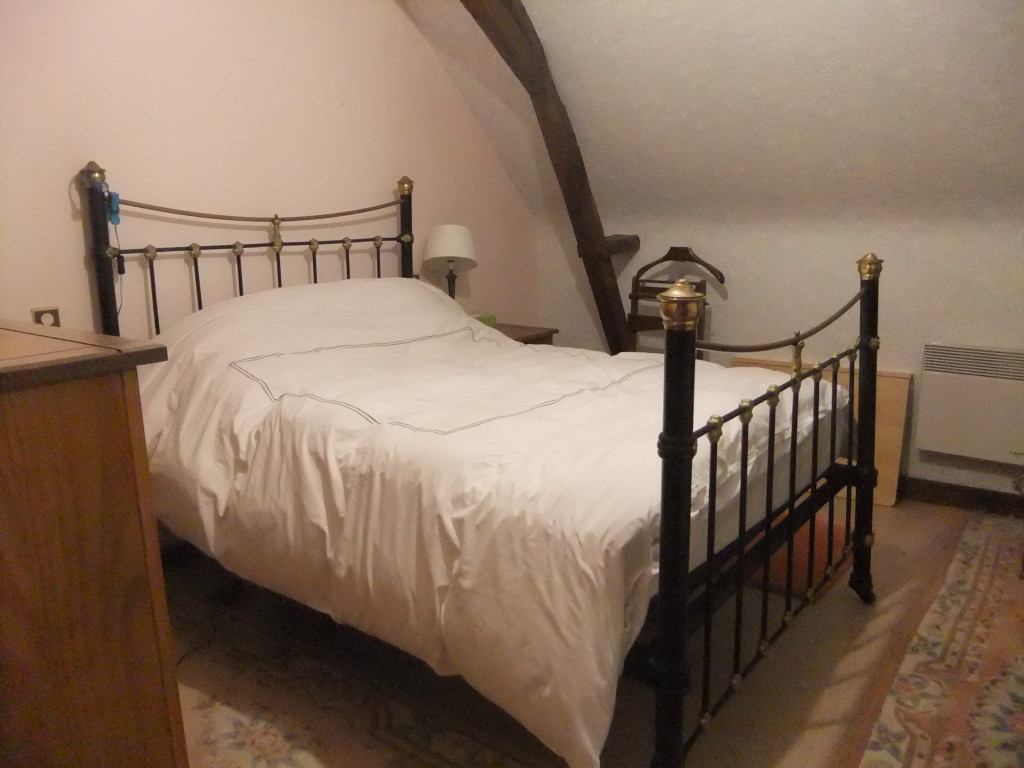 At 4pm we were in the Notaire’s office with Lauren and two of the vendors. 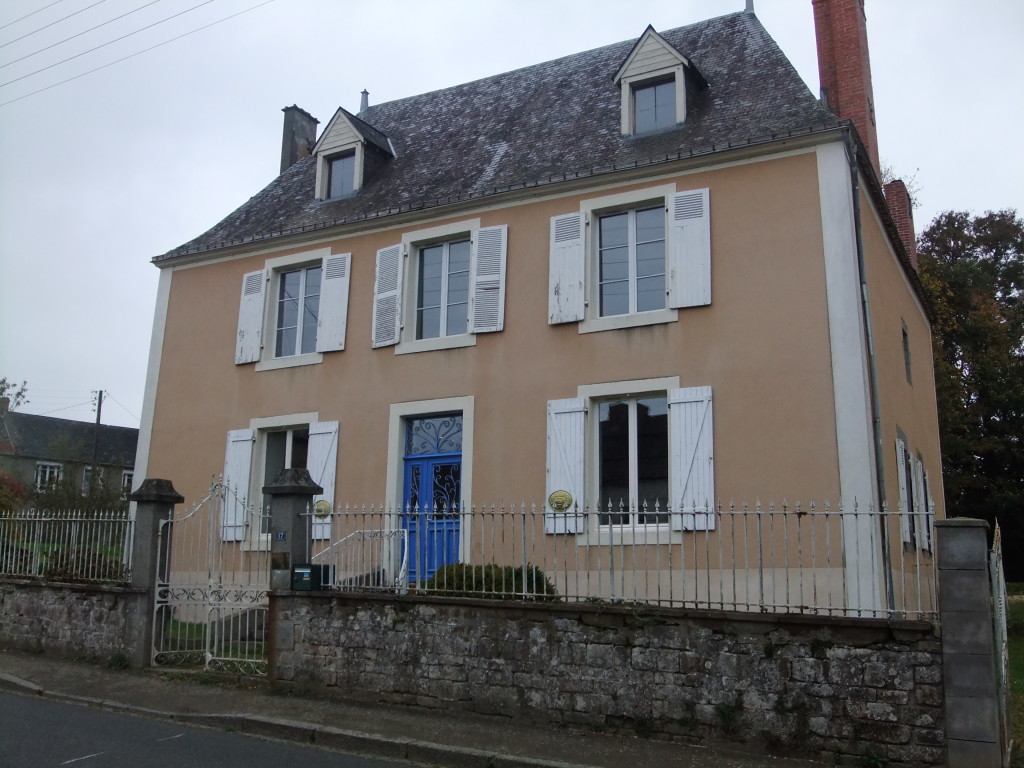 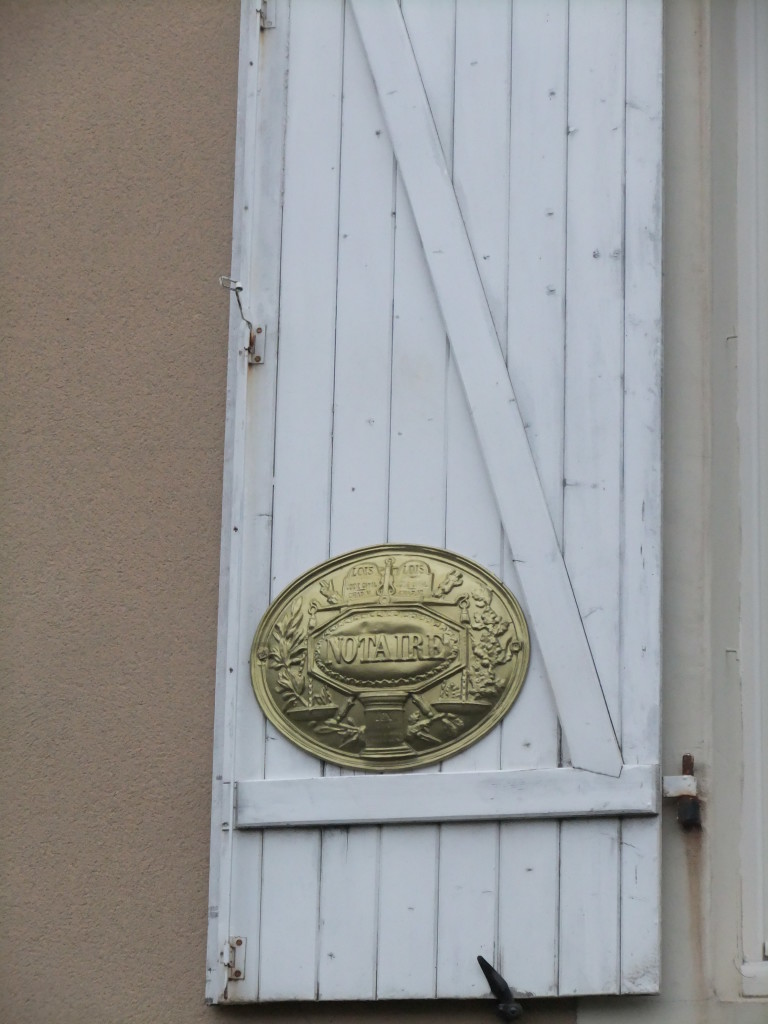 The Notaire went through the main details of the agreement of the sale, which was previously signed, then the main facts of the searches and finally the signing of the final contract for completion.  It was all conducted in French, even though the Notaire apparently speaks perfect English!  Thankfully, Lauren was able to translate for us…

It was difficult to follow the French discussions – I caught only a few familiar words.  Apparently there was some discussion on the formality of giving the farmer’s union the opportunity of first dibs on any parcel of land that is offered for sale.  We had to give them 8 weeks to respond.  Lauren told us that they usually take the full 8 weeks but buyers can speed up the process if they pay an extra fee!  It seems to be recognised that this is a bit of a money-making exercise.  What’s worse is that next year, the law will be change in-so-much that they can purchase any land that comes up for sale but they are not obliged to buy the house/buildings too, which will be sold separately.  At the moment, the whole estate has to be purchased if they want the land.  This change will make selling property that much harder because large properties without any land are very difficult to sell.  We were relieved that they weren’t interested in our acre…..

Turns out we are also lucky to be signing this side of Christmas because in the New Year, the Notaire fees are increasing…..

So, after all the talking and translations, we all signed about a dozen pieces of paper, the final contract of sale and La Biochère became ours. 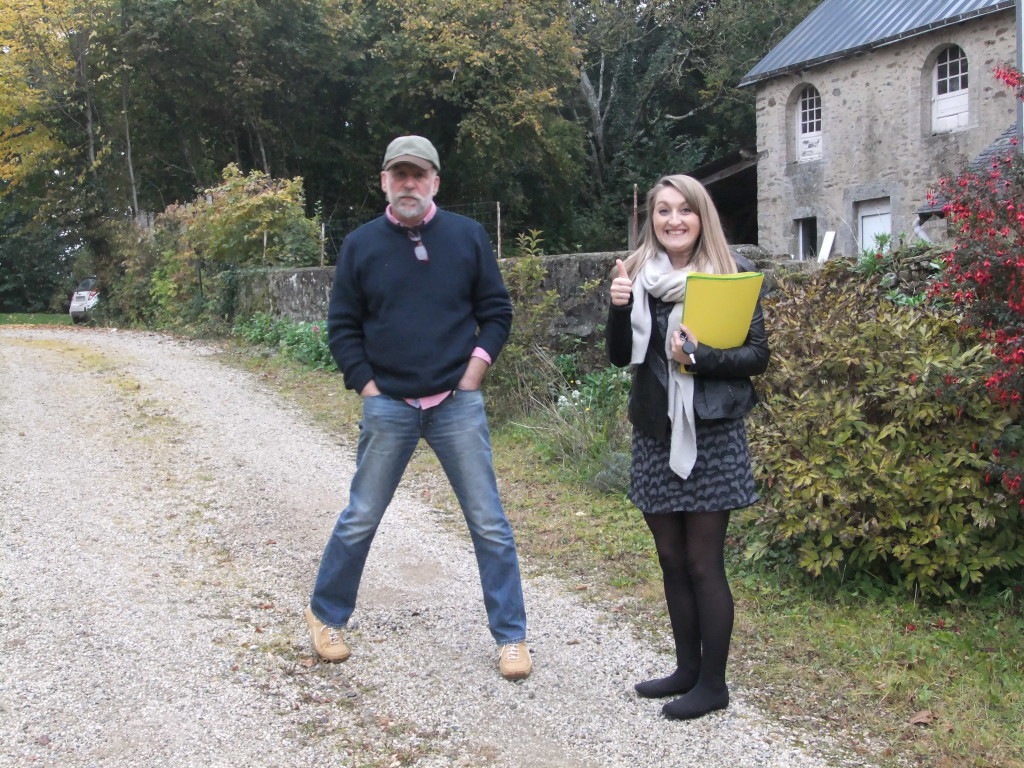 We can let you in on a secret! Please don’t tell anyone and we hope you don’t think we were foolhardy but….since we signed the compromis de vente (the sale agreement) even though we didn’t own the house, we have been working on it to get it ready to move in to.

It started with the front door to the kitchen….

It looked like it had sagged somewhat, being a heavy door and after years of being left, had scraped grooves in the tiles in the doorway…. It was soon remedied; Edward lifted it off its hinges, planed the bottom off and re-hung it so it swung freely.  Sadly, constant tugging and slamming to make it open and shut had taken its toll and the joints in the weatherboard were gaping open. So after Edward had made it work, I finished off filling the joints to make it weather-proof again…

The room from the back kitchen, the cave, was a floorless, un-plastered room, which we assume was used for storage.  It wasn’t nice going in there but it was useful space.  We decided it would become the laundry room and Edward set about putting in a floor to start with, then installed electric sockets around the walls before cladding them with tongue and groove – the transformation was amazing and when it’s finished and all painted, will make a great room for washing and ironing. 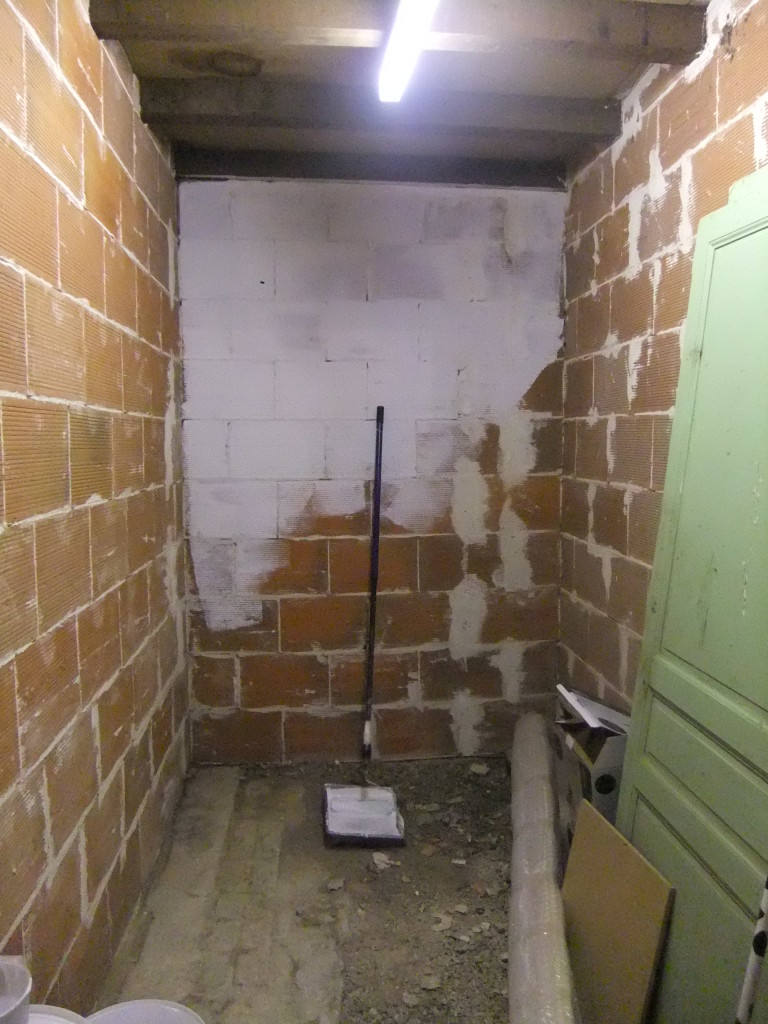 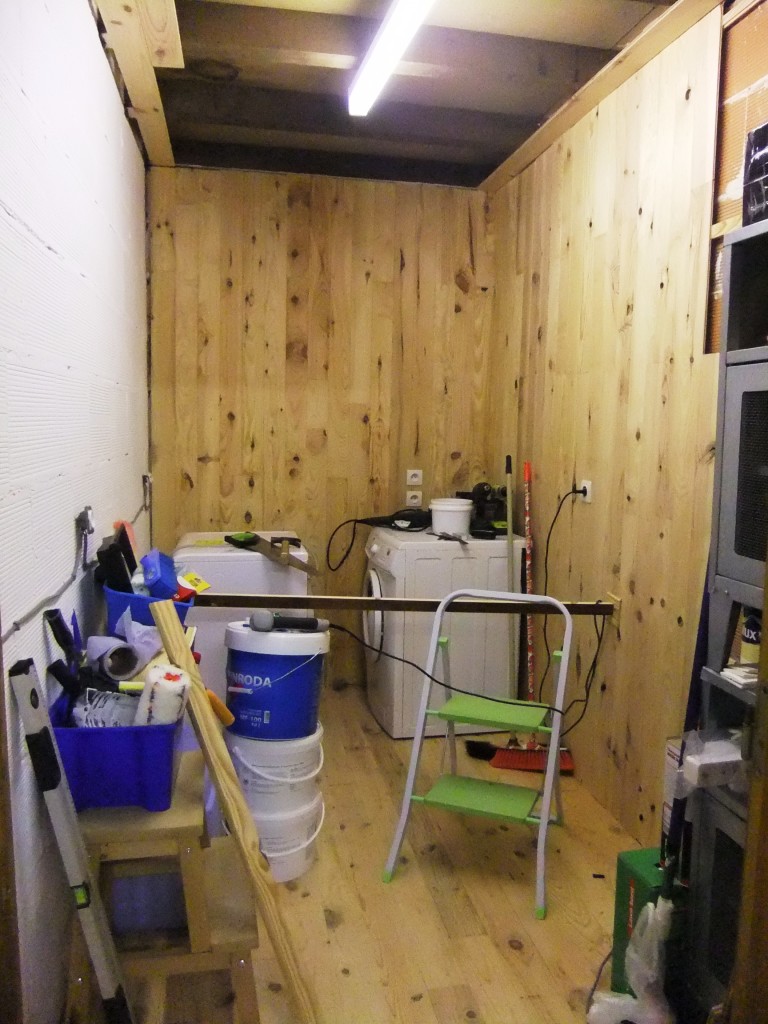 In the meantime, I painted the back kitchen, which made a huge difference – nice white walls really refreshed it.  The cats will be fed in here and we’d planned to keep the large larder fridge in here and our newly purchased chest freezer… 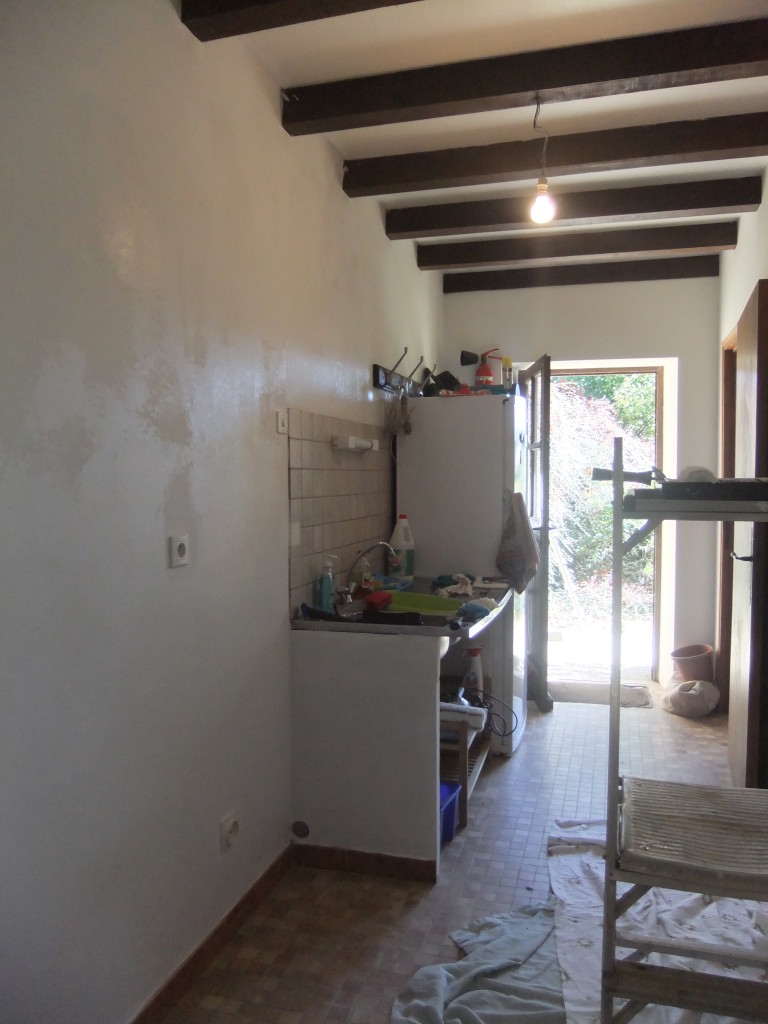 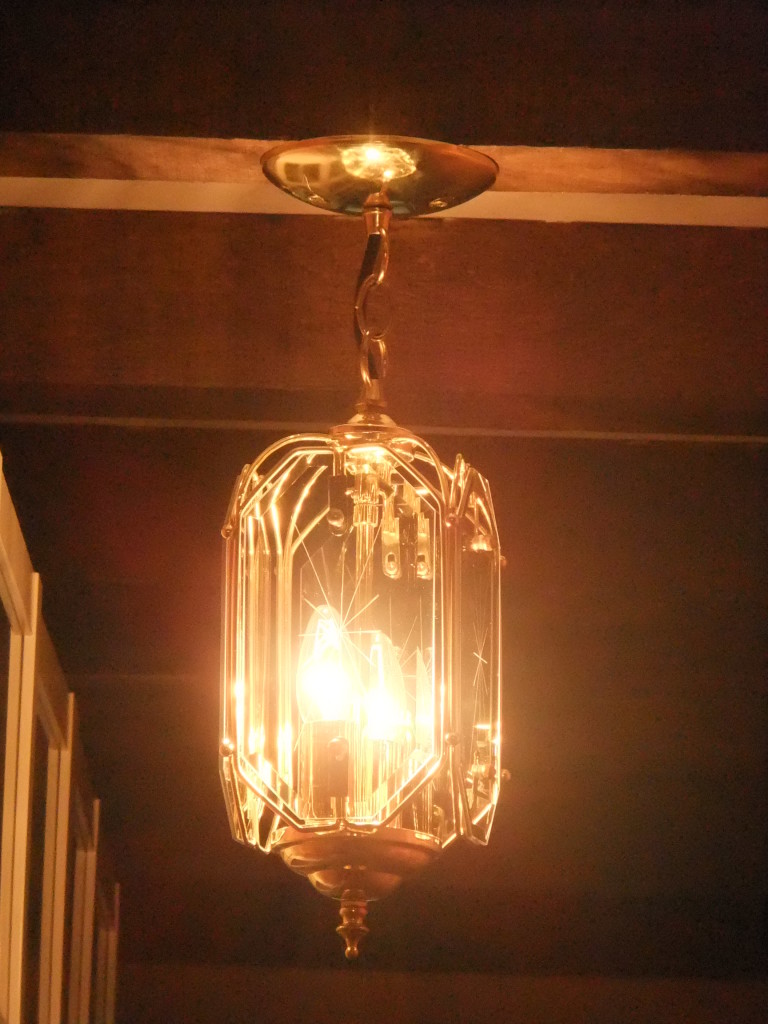 The living room and dining rooms are lovely but we realised that the walls hadn’t been finished properly.  They were covered with some sort of cement base, which we guessed should have been skimmed, but wasn’t.  The result was walls which crumbled dust everywhere and corner edges that were broken… So, we bought some sand-based paint to apply to the walls, which we hoped would help seal them and provide a better finish, while keeping the rustic look… 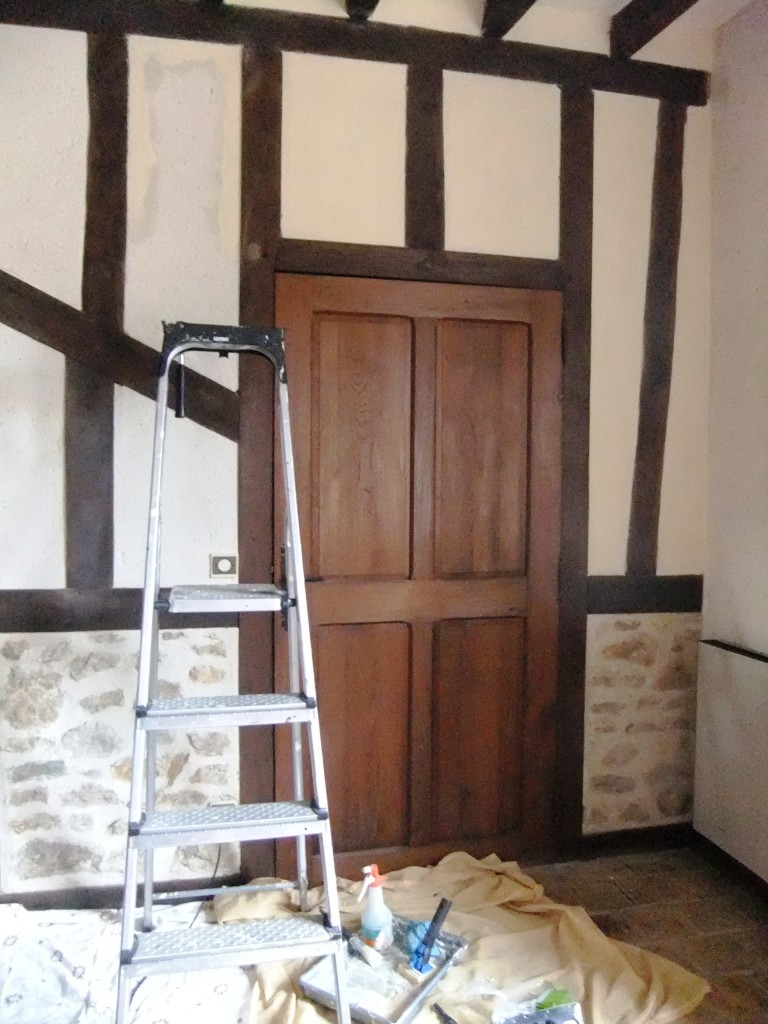 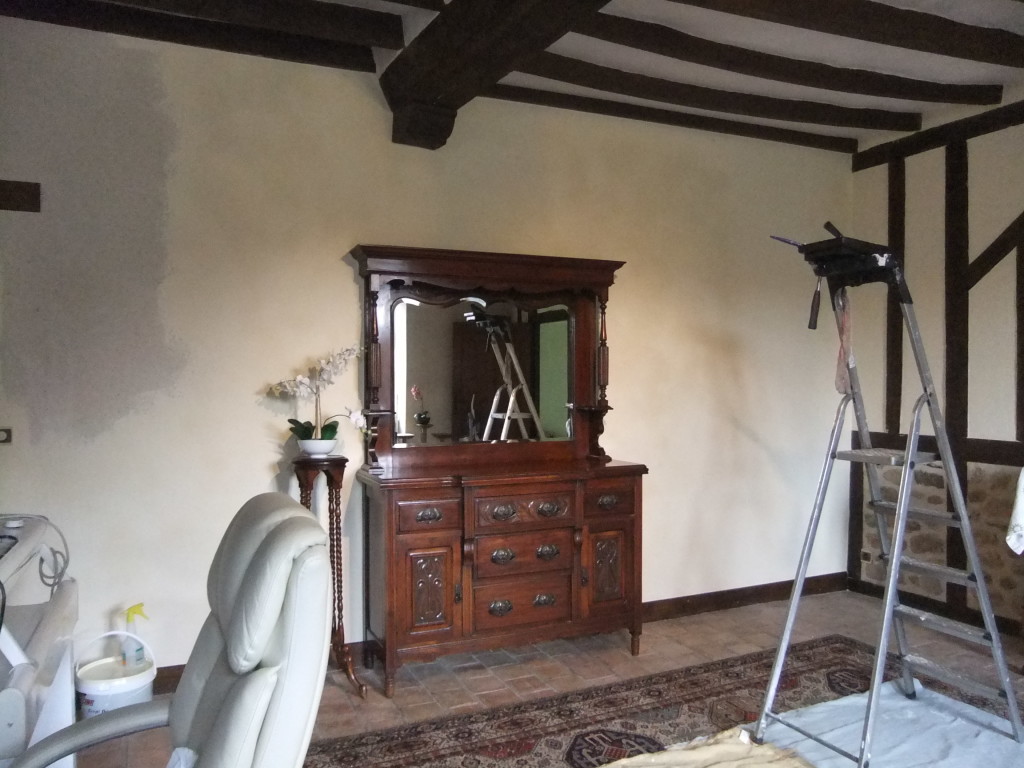 We’re pleased with the results and with the ceiling painted too, think it really sets the room off well – I still have to finish the living room but it’s a start and soon, when that’s done, we’ll be able to find homes for all the bits and bobs that are still in packing boxes…

Outside, there are a number of areas that need clearing, cutting back and cultivating… Edward couldn’t wait any longer to cut back the large cherry laurel that was blocking out most of the light from one of the living room windows, along with cutting off a large branch from the cherry tree by the big barn… 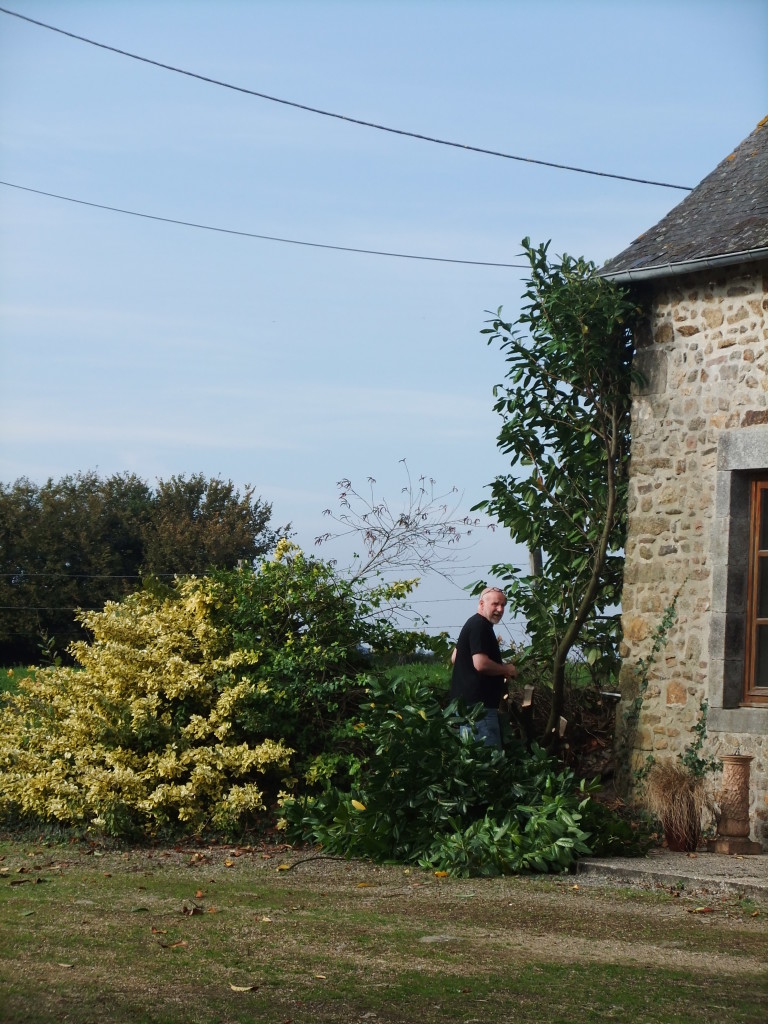 My attention was diverted when Edward insisted I needed to sort my bedroom out before we moved in (we have chosen separate rooms as we have different sleeping habits and this worked really well back in our old house in England).   He was right, it was in a bit of a state with damp patches and mould showing through where there had once been a leak from the chimney, wall paper peeling off and generally an air of neglect.

So, I started stripping wallpaper…. 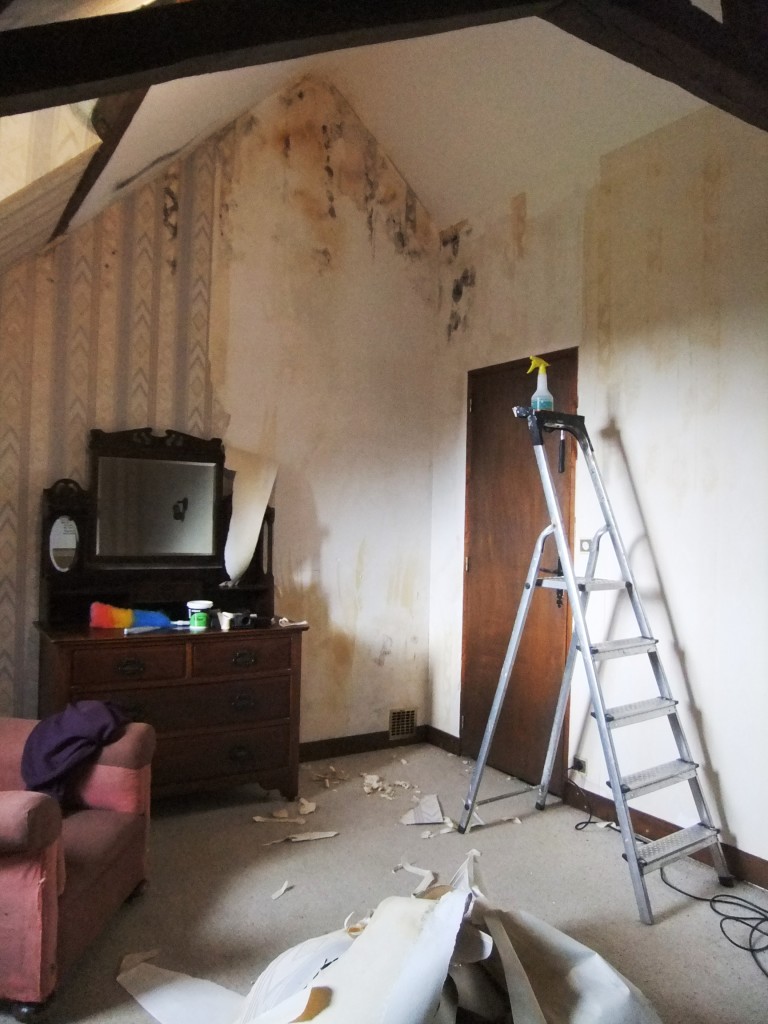 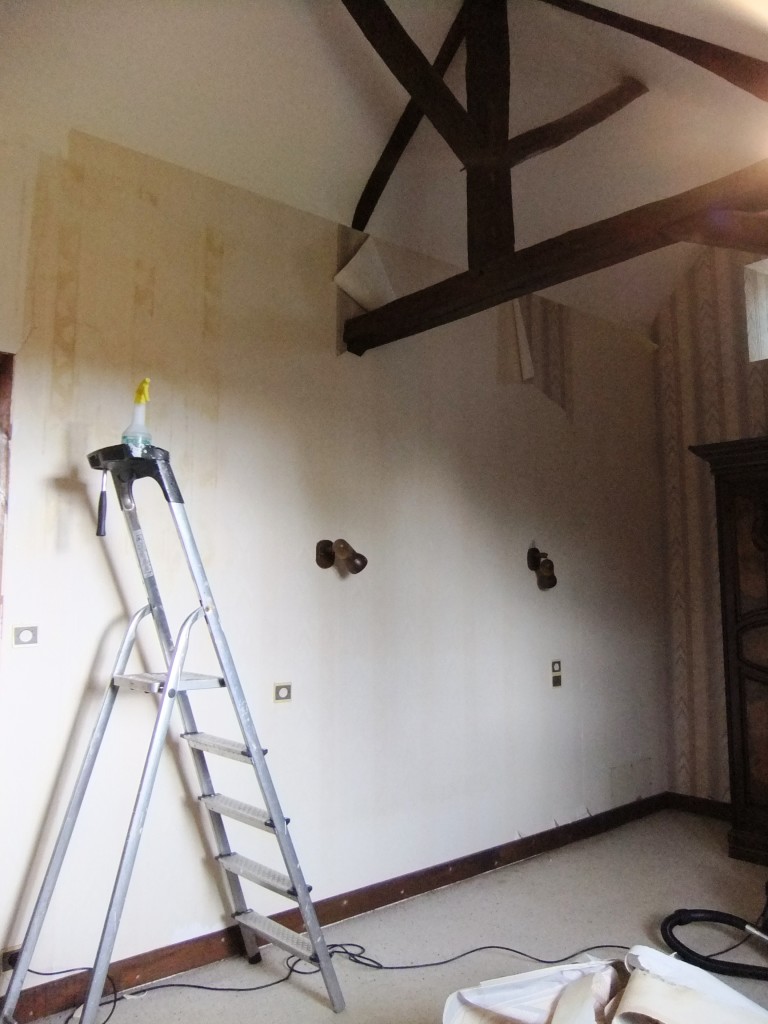 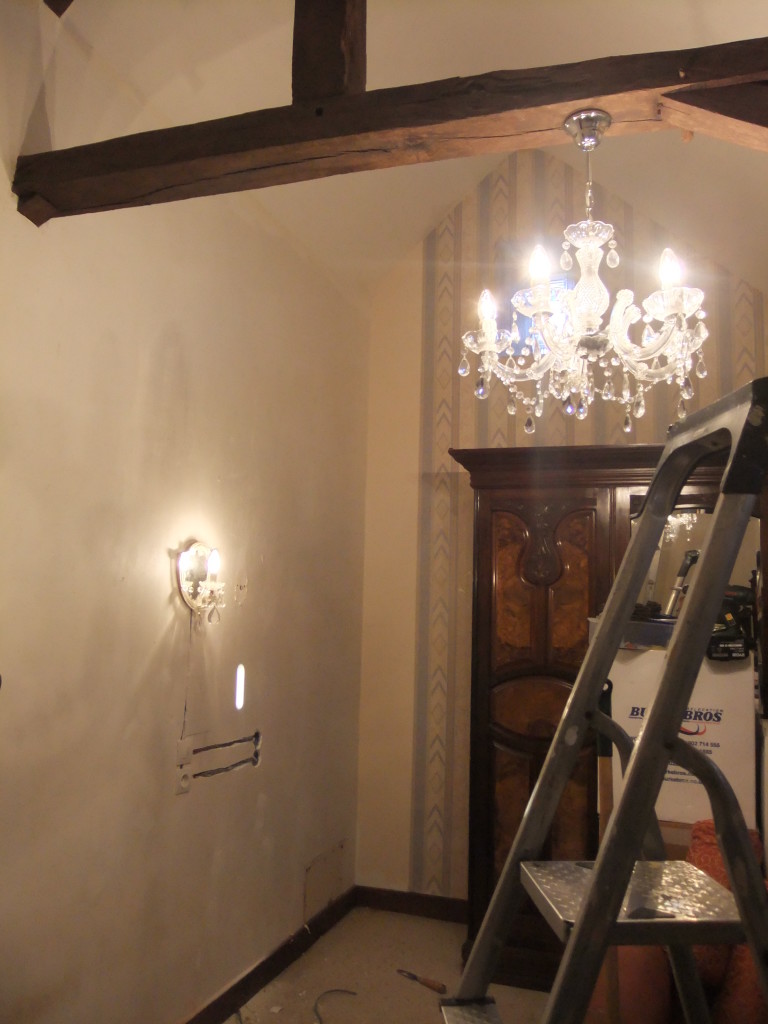 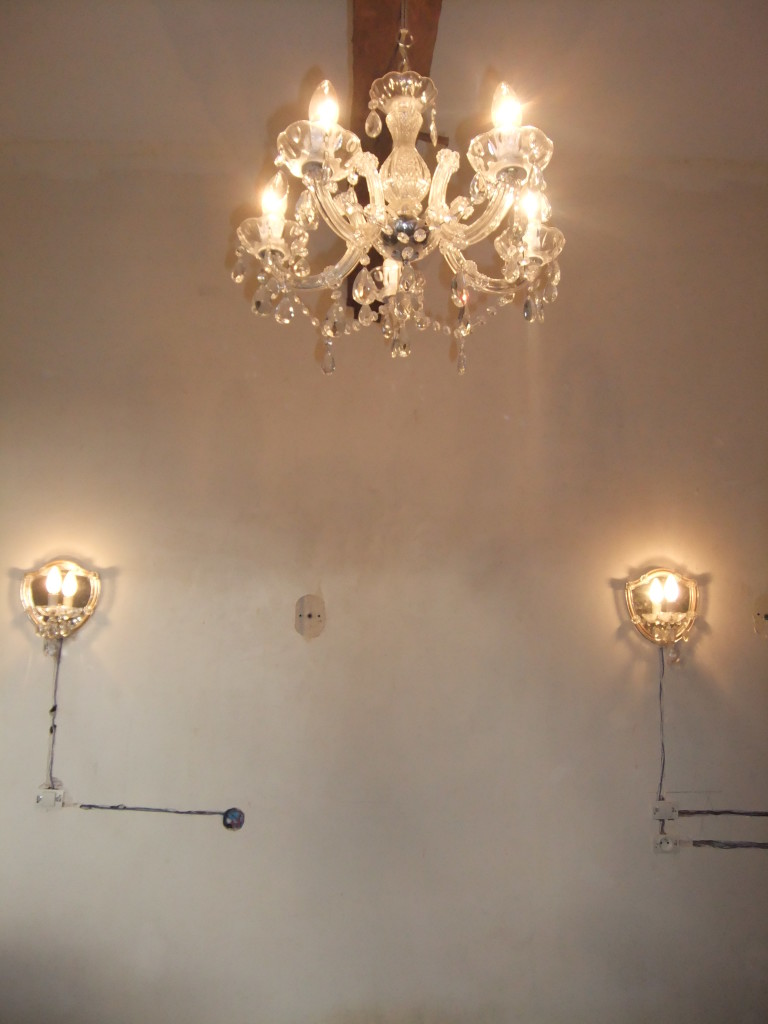 Sadly, even though the walls were cleaned and bleached thoroughly where the mould had developed (it was an old problem and no longer damp), it showed through after painting.

A trip to the Bricomarché later and I found some stain block, which seems to have done the trick.  Unfortunately, I’d left it too late to get started on this room and the delay with the mould patches meant I wouldn’t be in there after we signed.  Instead, we set up the room next door for the interim – all the rooms are lovely, albeit in need of some redecoration, and it’s no hardship to stay here….

So, we’ve been busy!  Probably illegally as the house wasn’t strictly ours before we started work, but there you go, we took a risk…

First night, morning and a delivery for North

After signing, we headed back home….. how amazing to be able to say that!  We had a light tea and Edward lit a fire in the living room so we’d be cosy when we watched a film….

Thursday morning and I was up at 7.30 am, sorting out the cats and enjoying ‘pottering’ in the back kitchen.  There is still so much to do but we have all the time we need to do what we want.  Sadly, the beautiful weather we had been enjoying had turned and we were faced with a grey, grizzly first day, but it didn’t dampen our spirits – we had a delivery coming from the brocante at Fresnay….

We are delighted with our new purchases and think they will look stunning with trailing nasturtiums in them in the summer…. 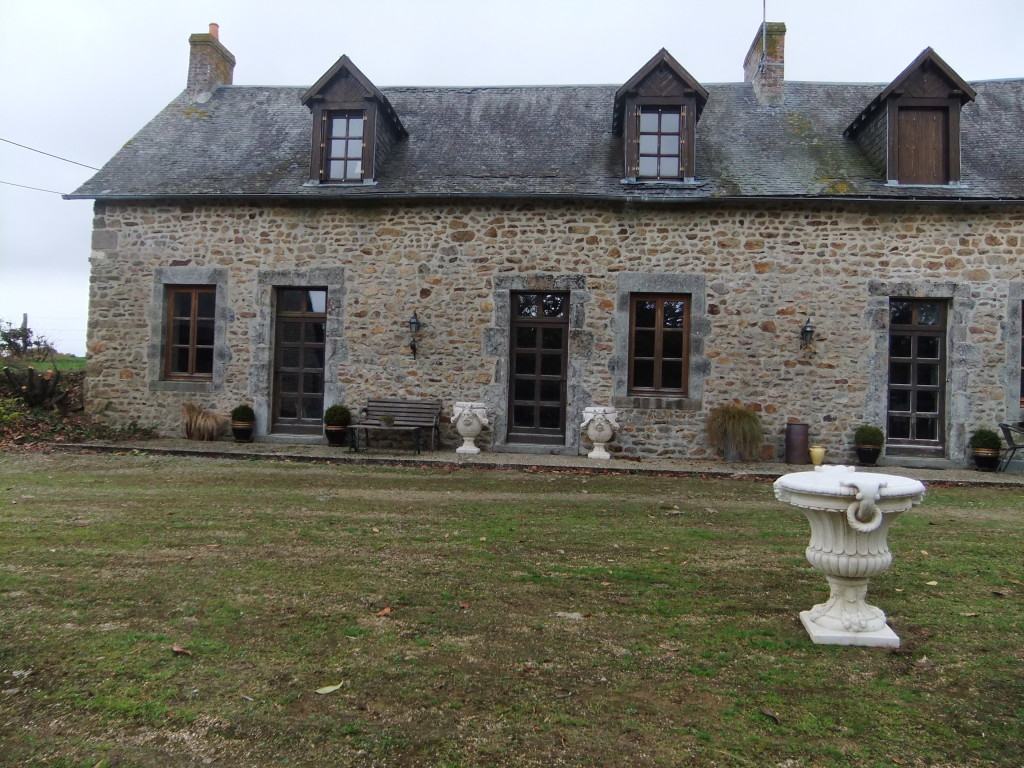 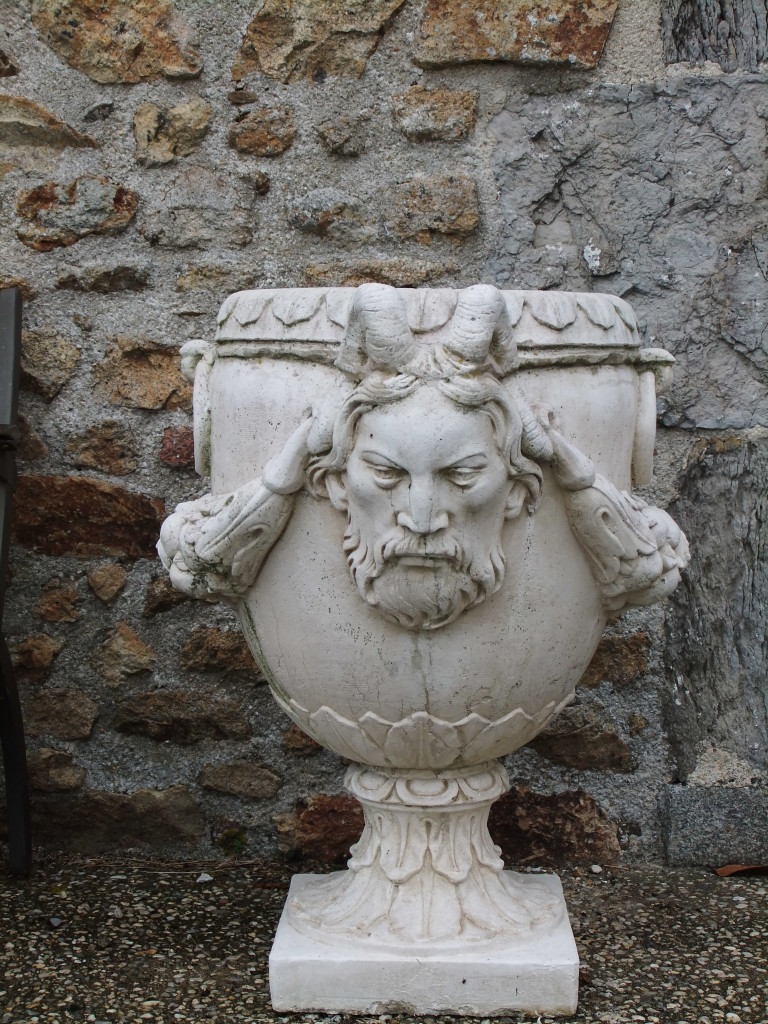 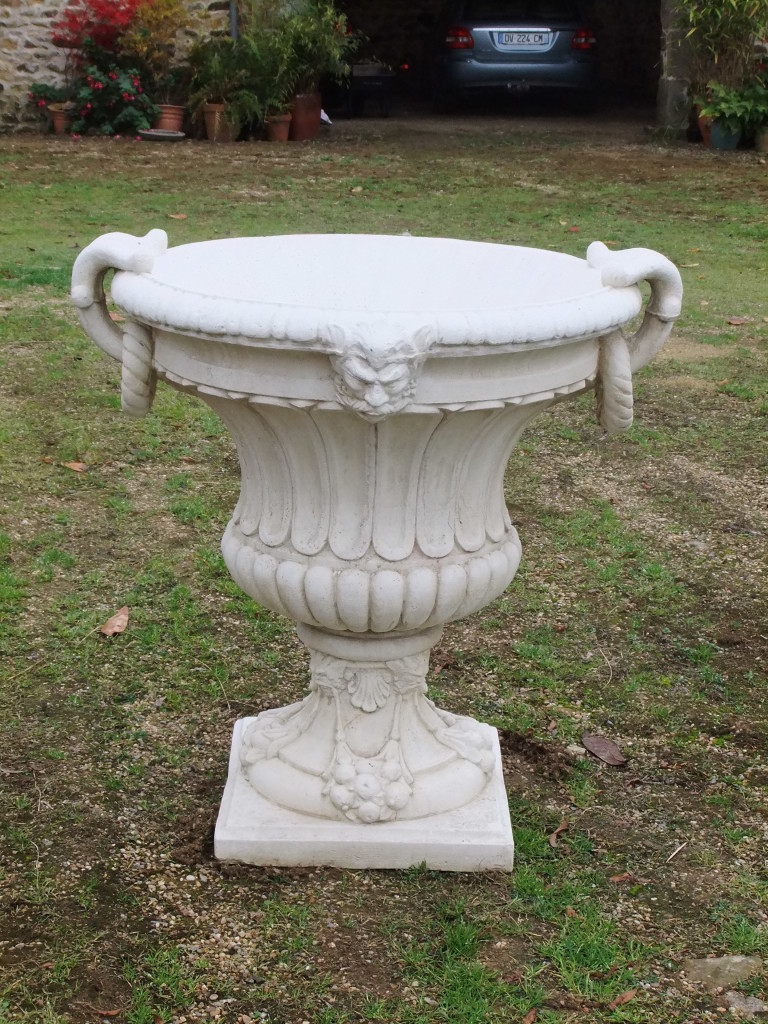 Monsieur Brocante (we need to find out his name!) was lovely – we invited him in for a coffee and showed him what we had been doing.  He was very taken with the old sideboard that was an inheritance from Edward’s Mum – it does look lovely in the dining room..

I think he liked that we had filled the place with furniture that fitted the surroundings.  We’ve asked him to look out for a round table for us and he will be letting us know how to best to treat the tommettes (floor tiles) as his friend is an expert – how does he know we won’t be able to stay away from his brocante?!!

Finally, a big thank you to everyone who has sent us good wishes for our moving in – it’s much appreciated and we shall be in touch when we get connected to the internet – this post is courtesy of McDonald’s!!