We spent Sunday in the garden. There was a big forsythia that we wanted to get rid of as it was ragged, unattractive and spoilt the view a bit. We also had the cuttings from the big laurel that Edward had cut down to get rid of. It was always going to be a full day, but there is always time for distractions. Wildlife is one of the distractions that perhaps we have missed out on for a few days as we had concentrated on the inside of the house.

The day began bright and sunny and we sat outside early on having a cup of tea and Julie walking Colin on a lead. Colin must be so ashamed to be mummied like that! But I had to call Julie when a large white bird flew over. It was an egret and it landed in the field opposite when another large grey bird flew up to chase it off. This time it was a heron who it seemed had already staked a claim on the field. The egret took off and flew a long circuit around the houe before settling again in the field.The Heron this time tolerated him for a while. He was too far away to get a decent photo on my phone but perhaps Julie got a snap on her camera. 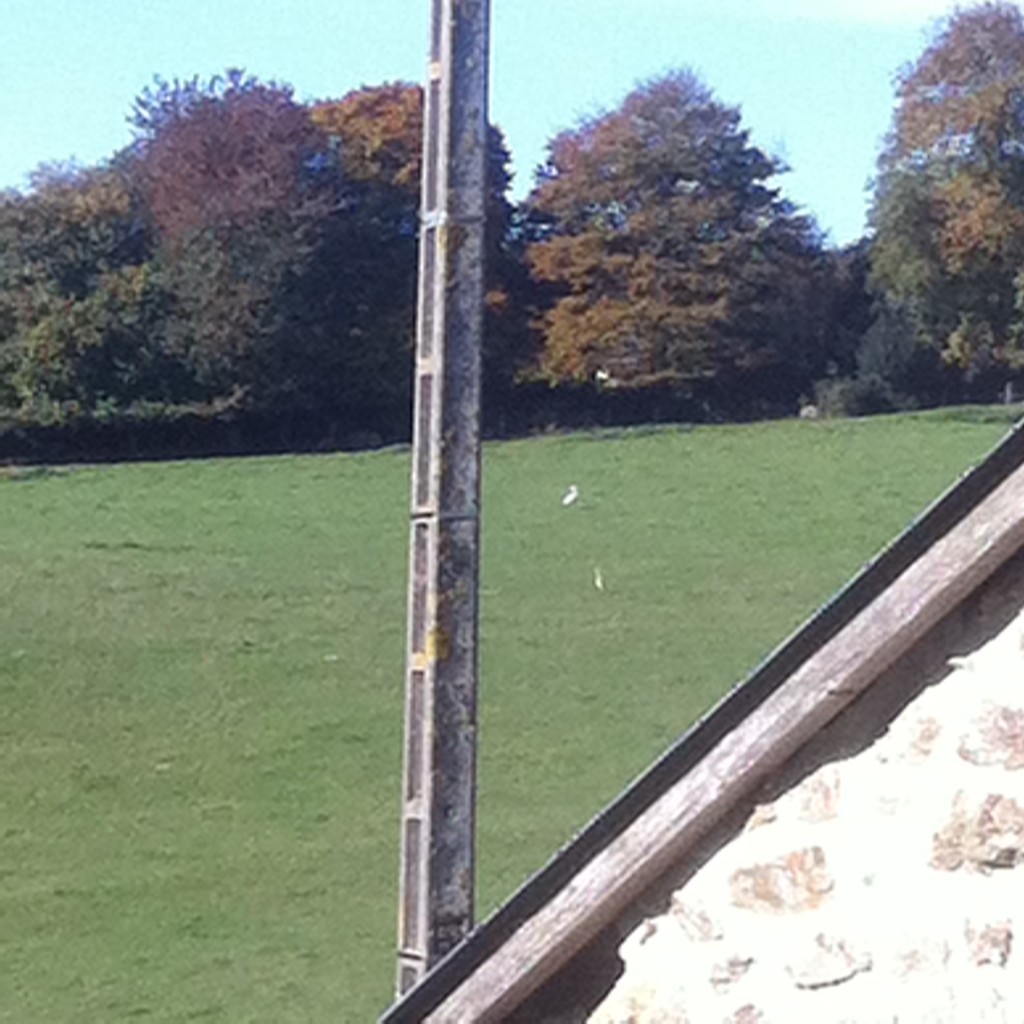 We cracked on with some gardening. Julie and I started lopping down the forsythia. 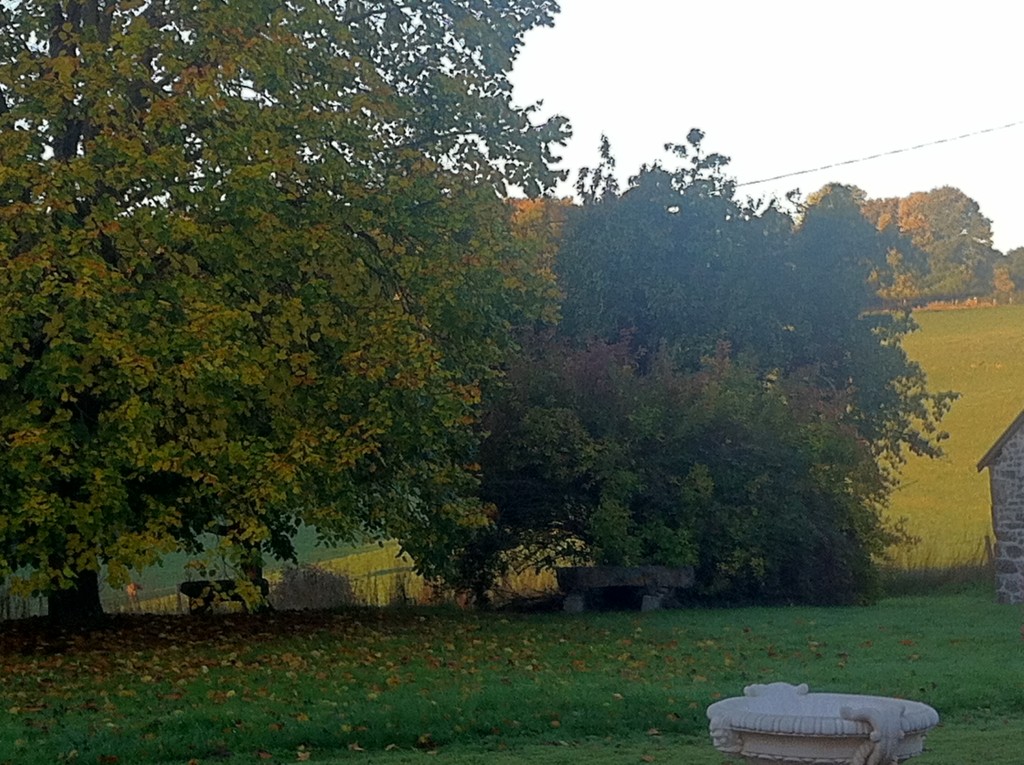 it didn’t take too long 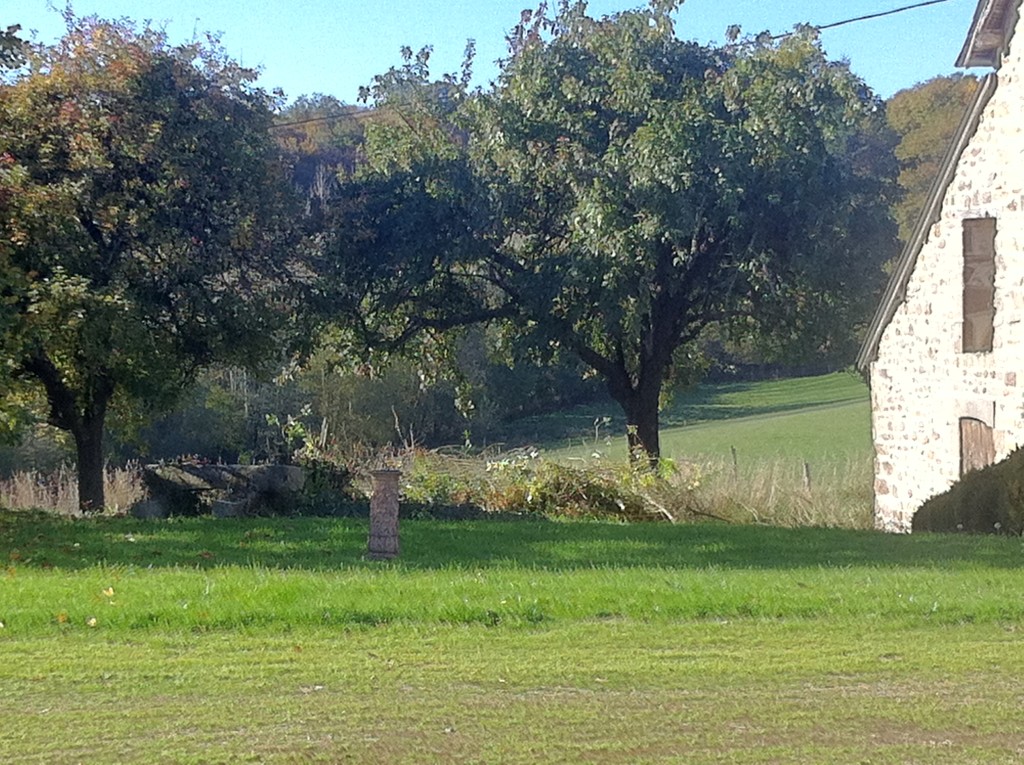 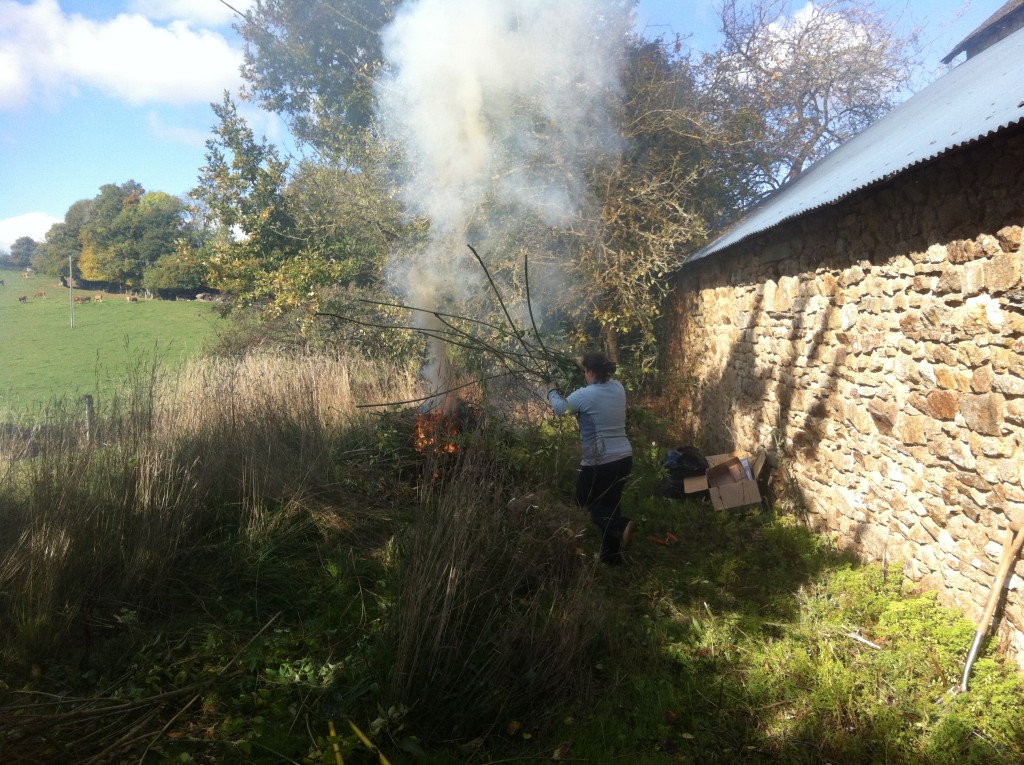 it became quite large and we decided we had made it too near to the barn for safety so we decided to let it die down. Some bats shared our opinion because 2 of them were disturbed by the smoke and flew off even in the day time. Poor things we hoped they would return! I did see some flying around that barn on Sunday evening and tonight (Monday) I saw one fly out of a barn window so hopefully all is safe.

I went off to prepare for the second bonfire of laurel leaves and branches while Julie tended the embers of the first. As usual Julie is never still and decided to tidy up the base of the barn wall of weeds and stones. She discovered lots of toads hiding under the stones and at the end of the wall evidence of a resident rodent. Something, presumably a mouse, had been collecting plum stones and gnawing in to them to get at the nut. It was enthralling to see a pile of plum stones neatly gnawed open 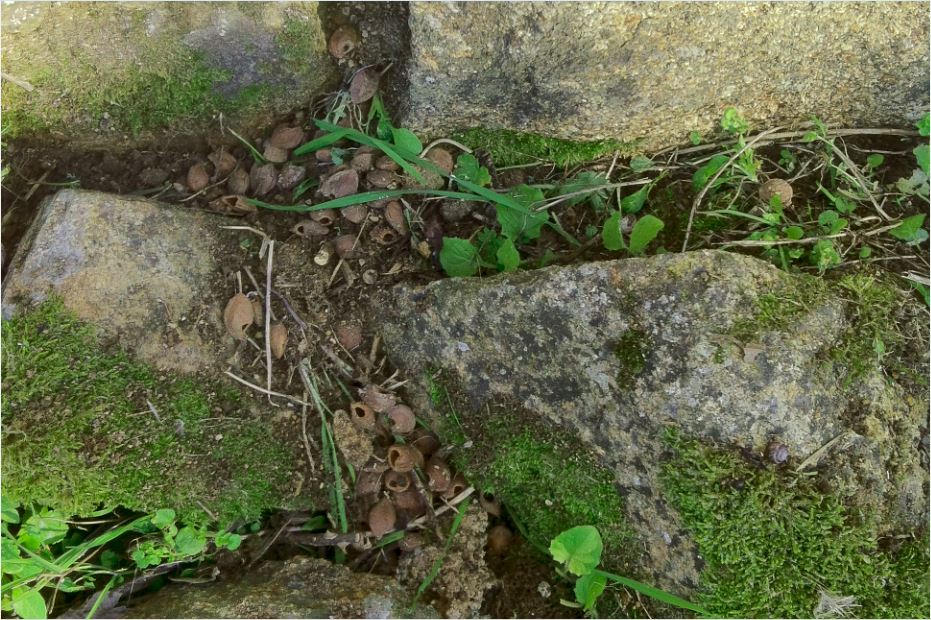 On the other side of the big barn I was cutting up the large laurel branches to make it easier to burn them. 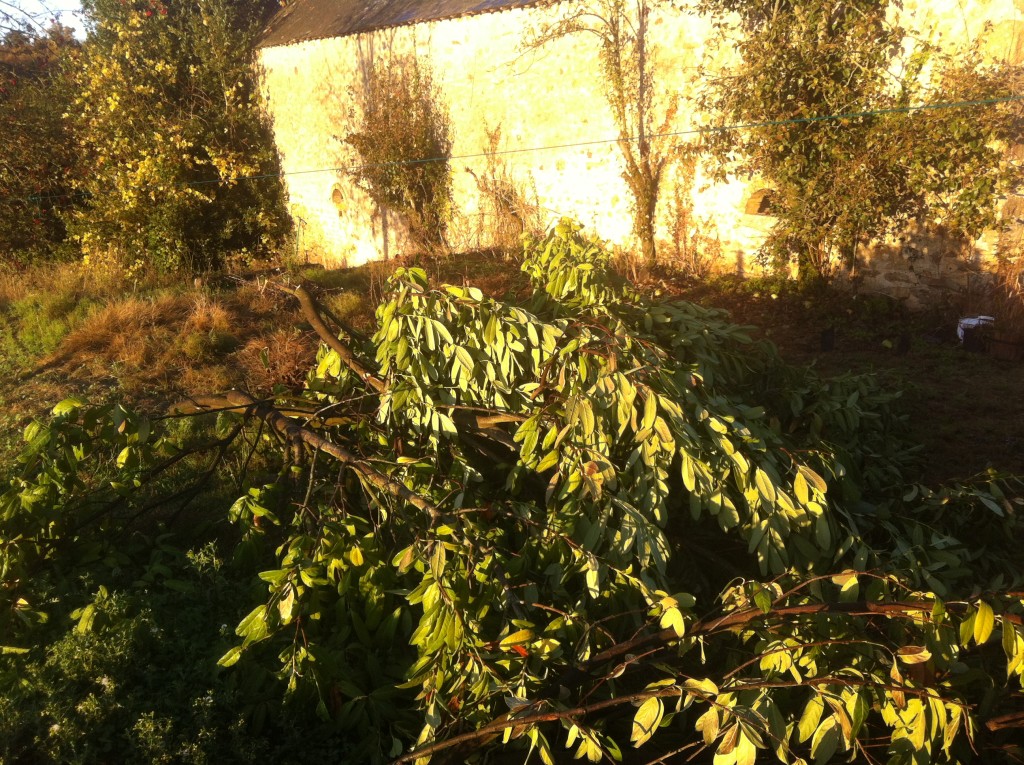 I quickly had an audience 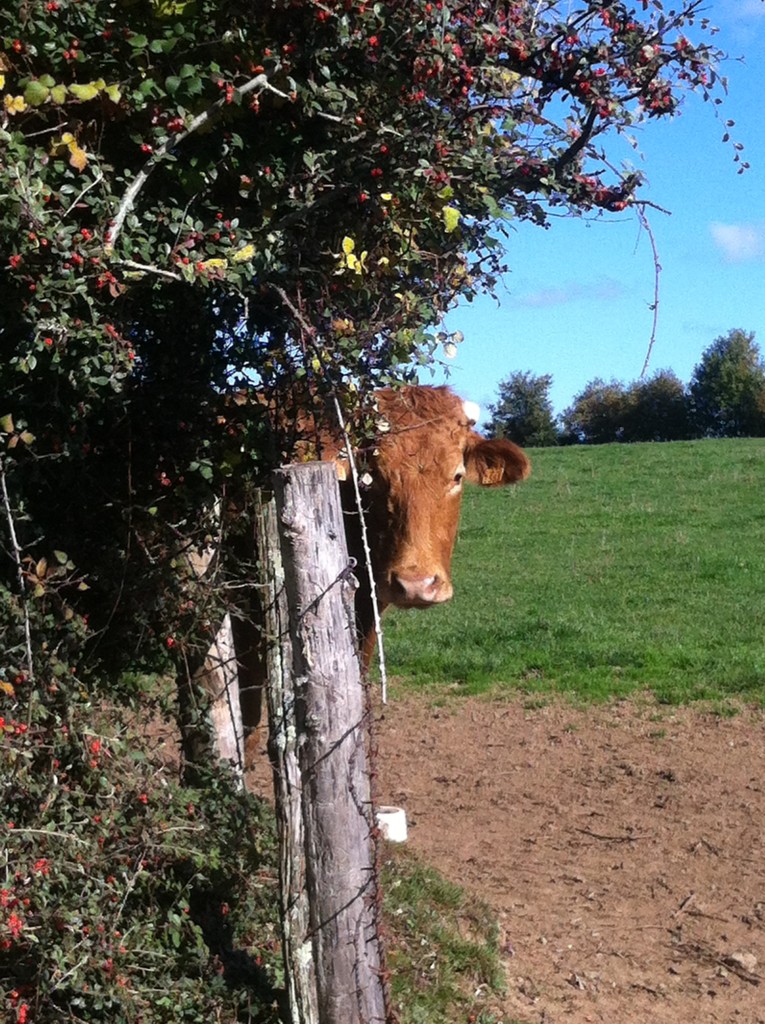 2555 hasn’t been around for a few days and 2679 has become the main recipient of pears recently. I asked her what she thought of 2555 and her answer was a bit rude 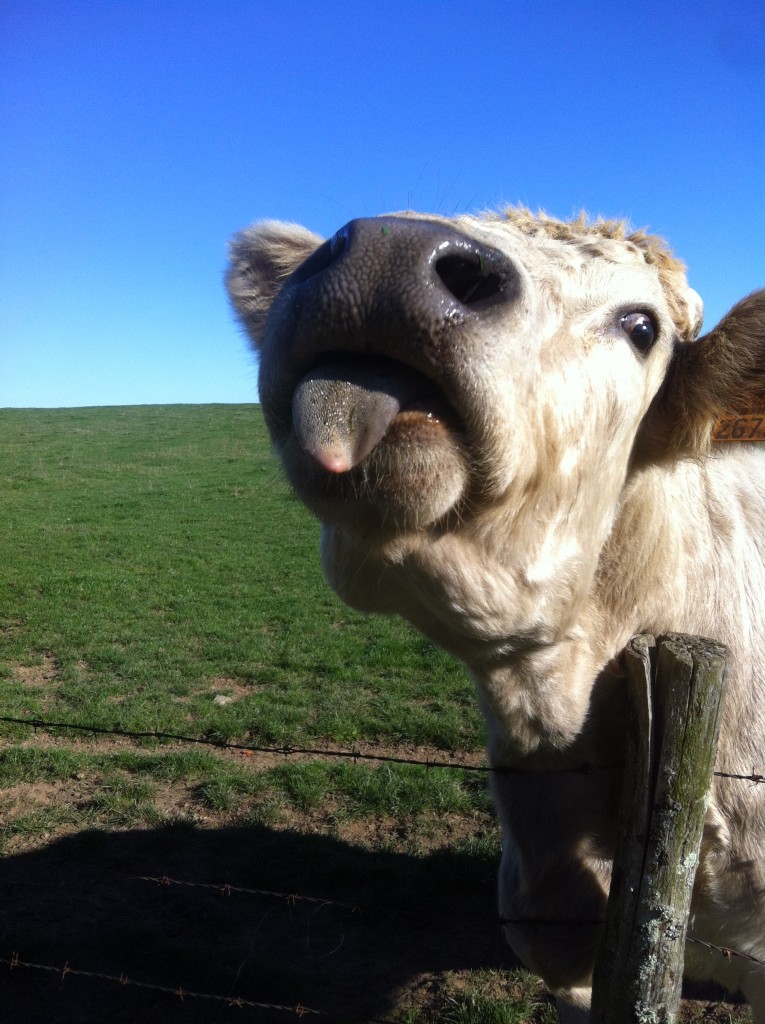 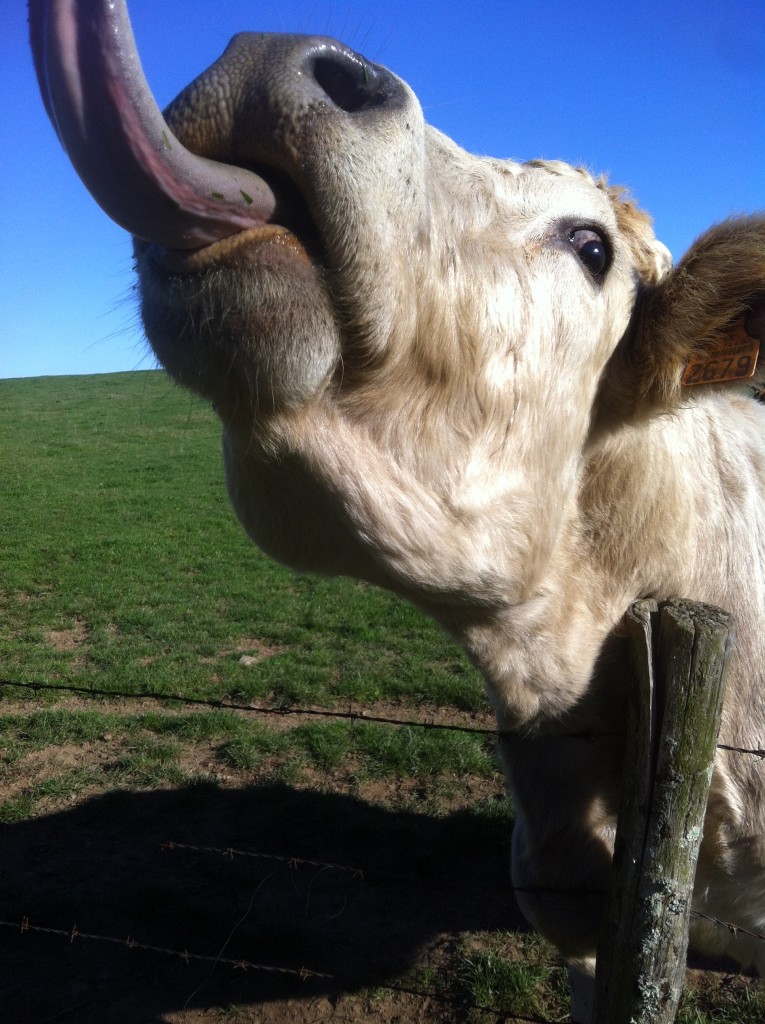 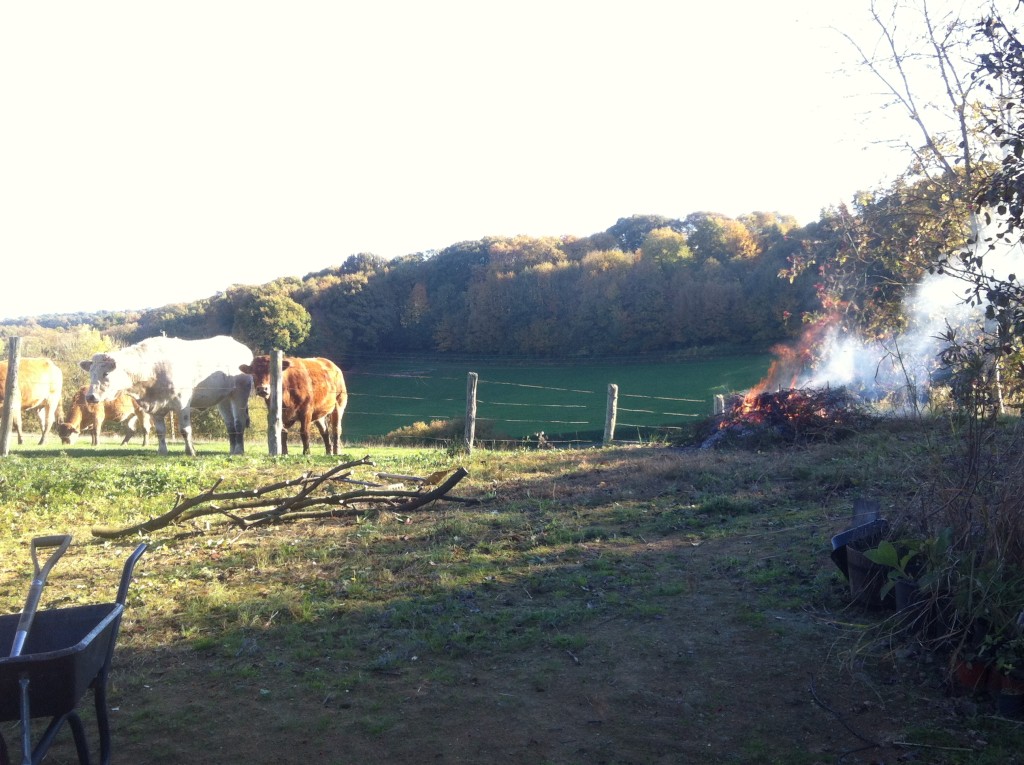 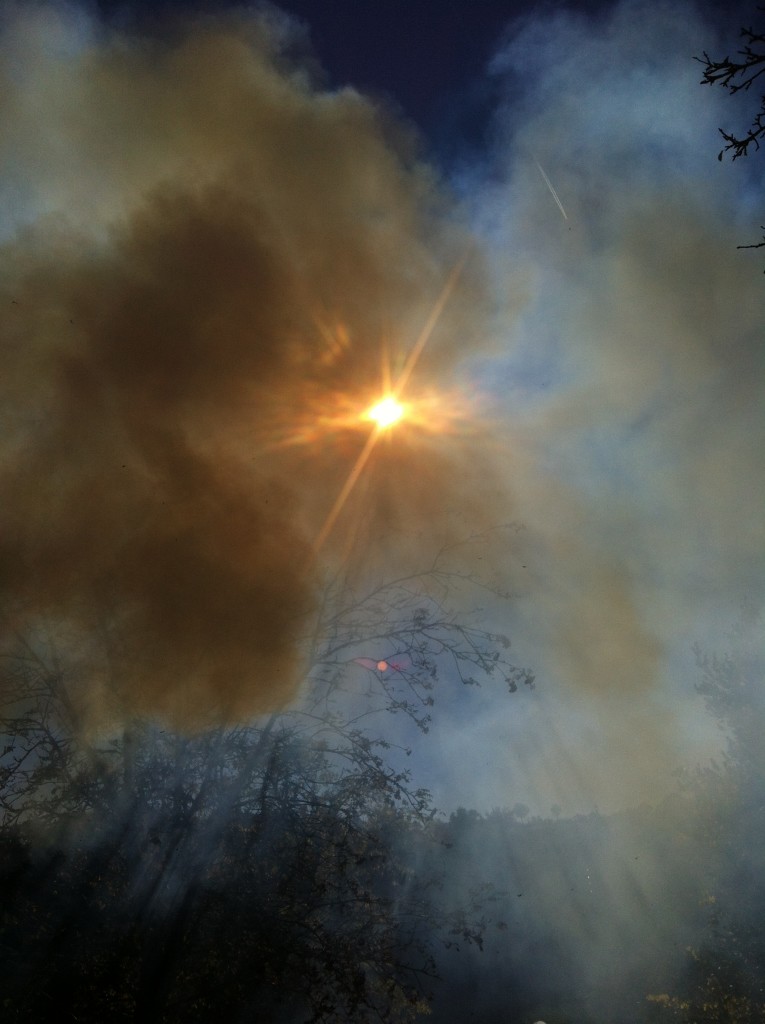 We weeded out some cotoneaster that had gone a bit rampant and also managed to rid ourselves of some of the particularly vicious brambles that are growing all around.

As we finished off gardening I took a walk up the lane to see what chestnuts remained on my tree. On the way I saw some violas 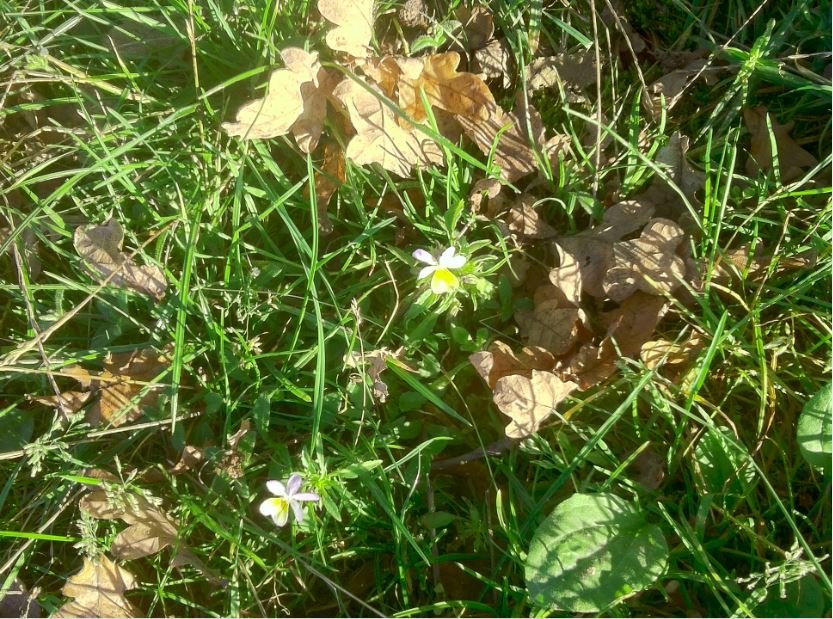 We’d already seen verbascum, campion and cranesbill in the lane 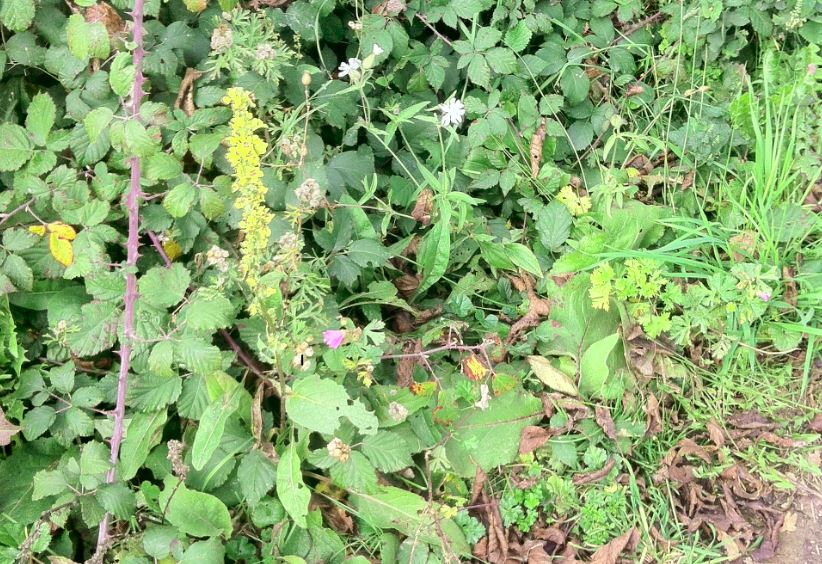 I managed to collect a few chestnuts which lay like jewels on the ground, and on the way back I walked across the cow field and picked a few mushrooms. 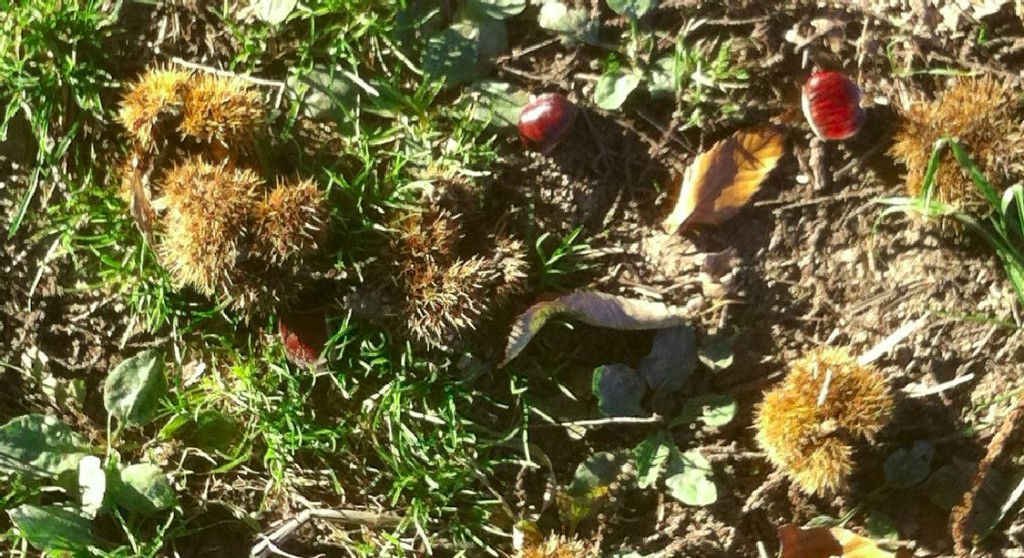 When we came back inside we looked out at our handiwork from the kitchen door and a robin flew down to scratch at the earth we had disturbed while taking out the cotoneaster. 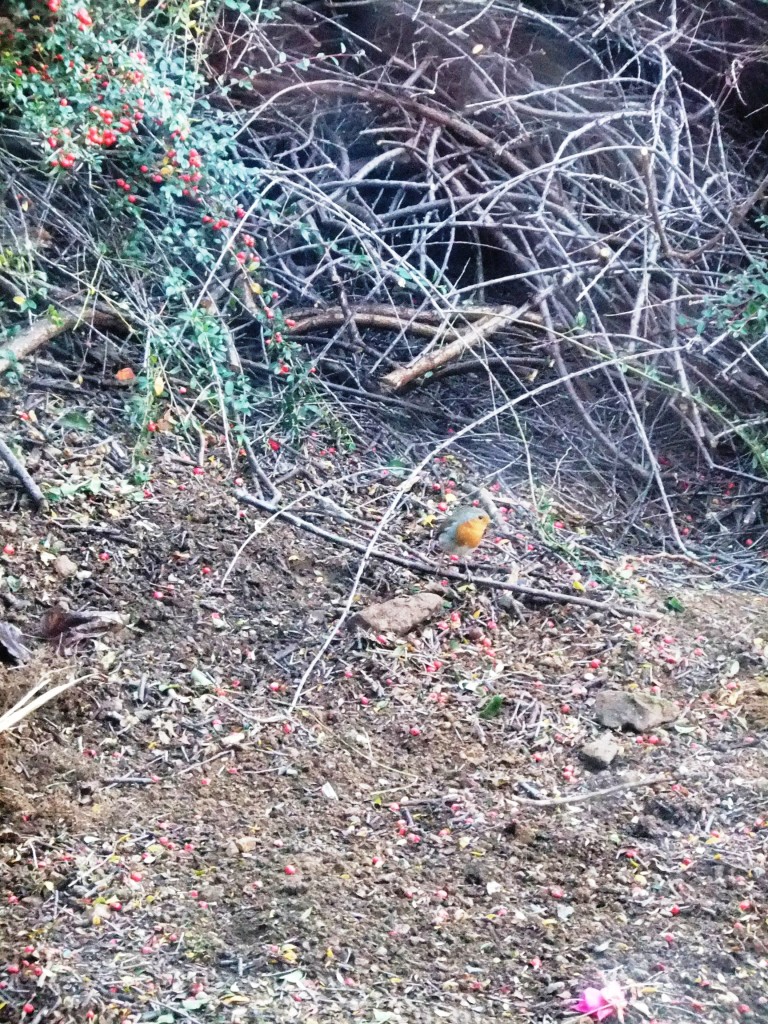 later that evening I went outside to check on the embers of the bonfire. I saw a bat fly away as I walked up there. Then a barn owl flew into the bay tree only to fly out a few seconds later in that seemingly effortless and perfectly silent flight that they have. I heard tawny owls screeching across the valley.

They were just a few highlights on a day when the regular buzzards, kestrels, woodpeckers, mistle thrushes, wrens, starlings were all doing their thing too. It had been a lovely day 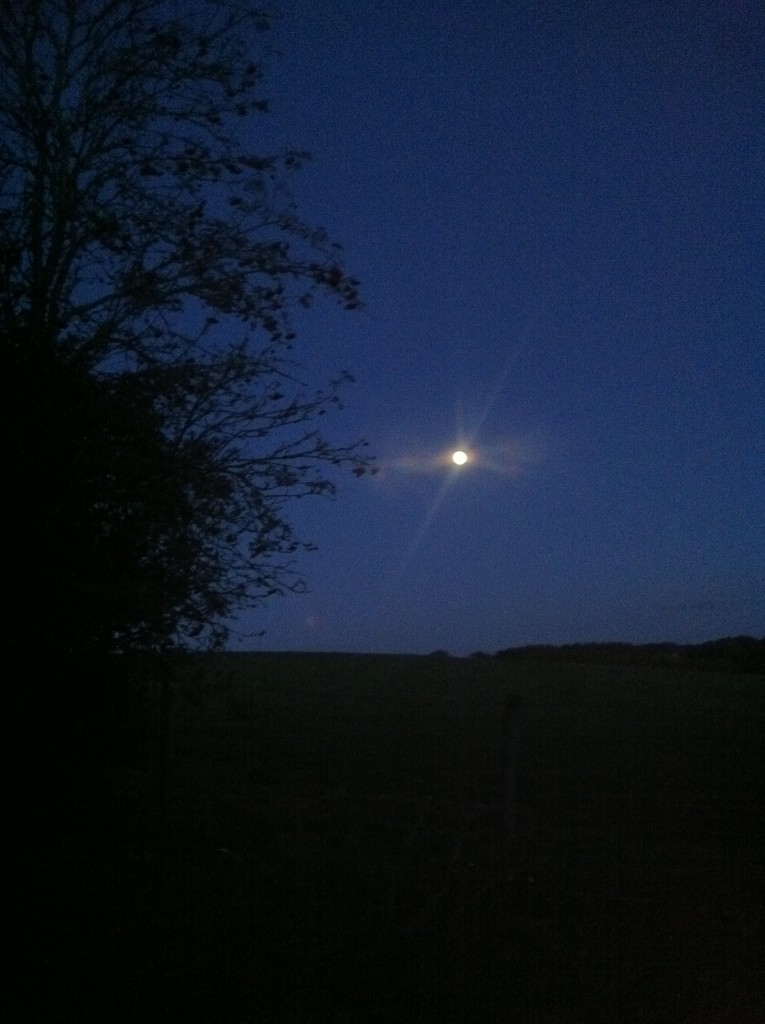